In D.N.C. Speech, Biden Will Preview a Fall Campaign Strategy Against Trump 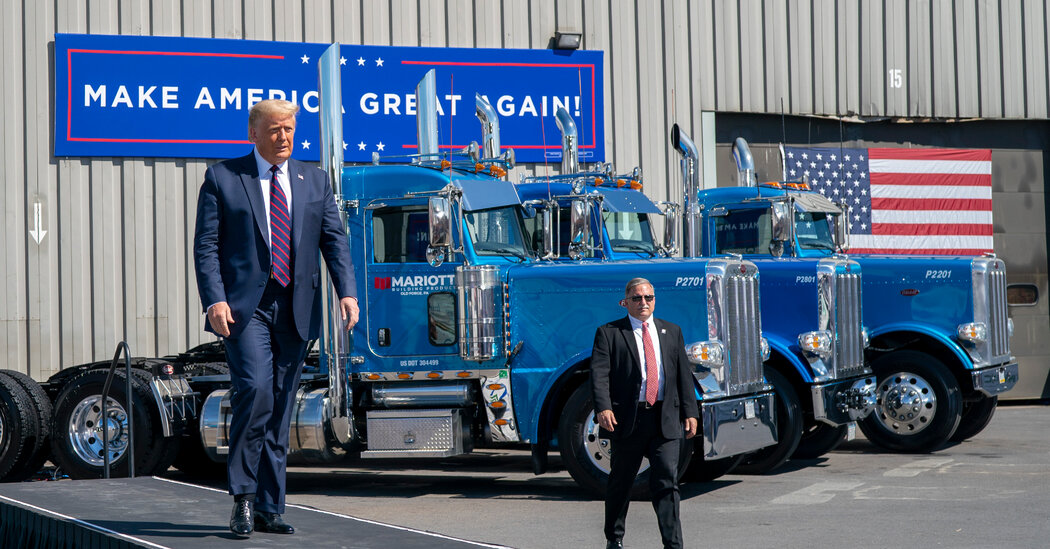 As the newly minted leader of the Democratic Party, Joseph R. Biden Jr. plans to ride out of its national convention with a message for the fall campaign centered on compassion, linking his heart-rending biography of setback and recovery to the lives of Americans hoping for their own rebound in a season of hardships.

But looming over Mr. Biden’s long-sought presidential nomination on Thursday was the ever-present shadow of another man who’s poised to dominate the final 10 weeks of the campaign and use his considerable megaphone to drown out Mr. Biden’s pitch: Donald J. Trump.

The president, who spent the day attacking Mr. Biden in the swing state of Pennsylvania, has been the greatest unifying force at the Democratic convention, given that loathing him is the one thing that everyone in the fractious party can agree on.

Mr. Biden and the Democrats spent the week prosecuting arguments against him on Covid-19, unemployment, health care, child care, climate change, foreign policy and his fundamental fitness for the presidency — attacks that only presaged a fall campaign that, even when it features Mr. Biden, will be aimed entirely at drawing contrasts with the current occupant of the Oval Office, Democrats say.

In a sign of both confidence and prudence, Mr. Biden and his new running mate, Senator Kamala Harris, will not leave Delaware to embark on the traditional boat, bus or train tour of swing states as presidential tickets usually do, in part because they want to model safer behavior than Mr. Trump has in response to the coronavirus.

Yet there’s another sort of safety consideration that the Democrats have in mind, too — the same one that has characterized Mr. Biden’s cautious candidacy, vice-presidential selection and virtual convention. He wants to keep voters focused on Mr. Trump, avoid unforced errors and confine 2020 to a referendum on the unpopular incumbent.

Though Mr. Trump and his advisers have chafed at Mr. Biden’s stay-in-the-basement political strategy, the ability of Mr. Biden to recede as the president dominates the news — often for the wrong reasons — was vividly illustrated in the hours before the former vice president spoke at the convention.

Earlier on Thursday, the president’s former chief strategist, Stephen K. Bannon, was charged with fraud over a “Build the Wall” scheme and, separately, a federal judge ruled that Mr. Trump had to turn over his tax returns to the Manhattan district attorney.

The back-to-back moves, coming after the convention got underway alongside the Senate Intelligence Committee’s report about Mr. Trump’s campaign contacts with Russia in 2016, were a reminder of the president’s ubiquity, for good and more often for ill, in what was supposed to be the Democrats’ week.

For his part, Mr. Trump has not hesitated to try to bend parts of the federal government to serve his political interests, and such attempts could make for a turbulent final two months on the trail.

Next week, during the Republican convention, Mr. Biden’s aides hope to capitalize on all the focus on Mr. Trump by sharpening their criticism of the president. They want to elevate more stories from people whose lives have been adversely affected by his decision-making in the fashion they did at the convention with one speaker in particular, Kristin Urquiza, whose father had put his trust in Mr. Trump and died of Covid-19.

Framing their attacks on Mr. Trump around real-life stories of regular people, they hope, will prove more effective than Hillary Clinton’s warnings four years ago about him as a theoretical threat.

“I don’t think anyone has ever unified us the way that Donald Trump has,” said Beto O’Rourke, the former Texas congressman who ran for president in 2020, adding he hears none of the “bitterness and ugliness and divisiveness” that plagued the party in 2016. “I don’t think people are as engaged in, ‘Does this candidate get a 100 percent score on every policy position that I hold?’ It’s more, ‘Can we save this democracy and this republic before we lose it forever?’”

He said the pandemic had further clarified the stakes. “Everything that everyone is going through all comes back to the decisions that one person made,” Mr. O’Rourke said of Mr. Trump.

Ceding the spotlight to an incumbent glad to bask in it isn’t entirely without risk, however. Some Democrats are bracing for an onslaught from the president aimed at Mr. Biden’s surviving son, Hunter, that they fear could rattle the former vice president.

Mr. Trump, who savaged Mr. Biden in Pennsylvania on Thursday in an effort to divert attention from the Democrat, has already steered his campaign in an overwhelmingly negative direction: Since mid-June, only one percent of Mr. Trump’s television ads were rated as positive in tone by Advertising Analytics, a media tracking firm.

So far, the former vice president’s advisers have been pleased that Mr. Trump’s barrage of advertising — including booking the widely seen banner of YouTube this week that featured ads questioning Mr. Biden’s mental agility — has yet to sharply drive up Mr. Biden’s unfavorability ratings.

Democrats have good reason to keep the focus on Mr. Trump. Since 2016, his political standing has dipped when the focus is on him rather than his rivals. Both Mr. Biden and Ms. Harris are prone to missteps when they are off-script. Perhaps most important, no matter what happens over the next two and a half months, the president is still likely to be the strongest adhesive holding together an ungainly Biden voter coalition that ranges from democratic socialists to four-star generals.

“Nothing unites the people of Earth like a threat from Mars,” said Paul Begala, the longtime Democratic strategist. “And Trump is a galactic threat.”

And like an asteroid bearing down, he can also be hard to miss.

When the news wasn’t coming to him by way of federal indictments, court rulings and congressional inquiries, Mr. Trump sought to muscle his way into the coverage of the week.

He tried to draw attention away from the Democrats by issuing a posthumous pardon for the suffragist Susan B. Anthony, but diverted attention from his intended diversion by using a White House news conference to return fire at Michelle Obama, the former first lady.

Then there was the president’s more standard fare of conflict creation, such as when he floated a boycott of Goodyear and, when asked about the QAnon conspiracy, said only that he knows its adherents think fondly of him.

As for the convention itself, the most memorable moment may have come when former President Barack Obama stood before an exhibit on the founding fathers in Philadelphia and said Mr. Trump represented a clear and present danger to American democracy.

Before Mr. Obama had even concluded his remarks, he found an eager interlocutor in the White House, as Mr. Trump conducted his own, all-caps rapid response campaign on Twitter.

The Biden campaign hopes the former vice president’s more moderate image is suited to lure those turned off by Mr. Trump’s tweets and tone, and the convention was designed to provide them something of a permission slip to switch sides, with numerous clips of since-estranged 2016 voters for Mr. Trump.

Valerie Biden Owens, Mr. Biden’s sister and one of his closest advisers, told the North Carolina delegation this week that what makes the Biden-Harris ticket distinct is its ability to appeal to voters across the map.

With interest piqued in Ms. Harris as the new face of the ticket, the plan is for Mr. Biden’s running mate to do a spate of appearances, media interviews and fund-raisers as Mr. Biden keeps a lower profile during next week’s Republican convention. Ms. Harris is broadly expected to play the traditional running mate role of presidential antagonist, providing a taste in her speech on Wednesday when she declared, “I know a predator when I see one.”

While the Democrats’ convention was full of frontal attacks on the president, even the segments meant to testify to Mr. Biden’s character presented an unstated contrast with Mr. Trump.

There were tributes to the former vice president’s dedication to his wife, stories of how he sacrificed for his children and testimonials about his selflessness, including how he has befriended those who have suffered loss or, like him, struggled with a stutter.

“The contrast between him and Trump is so vast,” said Nancy Pelosi, the House speaker, “there’s no words to describe it.”