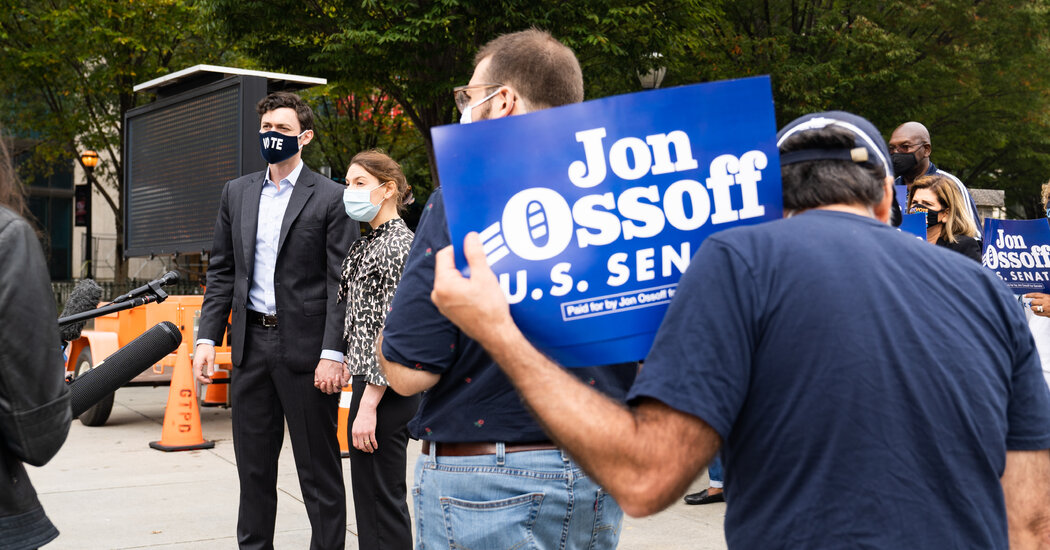 ATLANTA — Jon Ossoff may not have known it, but a possible key to victory in his Georgia Senate race had just pulled up beside him in a dingy black van.

Mr. Ossoff, a 33-year-old former journalist who is seen as one of Democrats’ brightest hopes in year when Georgia could be crucial for the battle of Senate control, was arriving at State Farm Arena in Atlanta this month to vote early. To his left, the van unloaded a gaggle of older Black men.

“First-time voters!” the driver yelled as two of the men, Richard Sanabria and Tony Lamar Jones, walked out.

His question should come as no surprise. Over 100 million eligible, voting-age Americans did not vote in 2016, more than the number who voted for either presidential candidate. In Georgia, about 60 percent of eligible voters cast a ballot in that year’s presidential race, roughly on par with the national figure of 55 percent.

As Democrats eye Georgia for possible gains this November — the first step toward a larger goal of remaking their path to victory in statewide races throughout the South — high turnout will be the name of the game, and that means persuading nonvoters to become voters.

In traditional swing states like Pennsylvania and Wisconsin, most political observers believe that turnout is largely fixed and that campaigns rise and fall based on their ability to persuade a set of voters. But in the new set of battleground states in the South, as well as Arizona in the Southwest, the priority is converting nonvoters into voters.

The thinking goes: If the party is able to reshape the electorate with new arrivals to the state — including young people, Latinos and Asian-Americans — as well as greater participation from Black residents and immigrants, a red state becomes a blue one.

But experts who study nonvoting populations and the failed Democratic campaigns of recent years warn that the work of changing electorates is hard and complicated. There is no such thing, they say, as an inevitable demographic destiny.

Nse Ufot, the executive director of the New Georgia Project, a nonpartisan group that has sought to turn out voters among the state’s new residents, said that doing so in a meaningful way could not happen with “five-minute conversations that you have on people’s porches.”

“It is a sustained campaign that requires smart targeting, messaging and research,” she said.

She added, “And when you think about the transactional nature of electoral campaigns, they prioritize getting people who are already voters to vote for them.”

The work of registering new voters has become associated with progressive politics and is often an articulated strategy for Democratic candidates, but the groups make a point to target individuals regardless of their party identification.

In 2016, nonvoters were younger, less educated, less affluent and more likely to be nonwhite than the average American voter, according to an extensive Pew Research Center study. They were also more likely to lean Democratic, Pew found, a sign of how a failure to motivate liberal voters was as much a part of Hillary Clinton’s loss as the persuadable swing voters who backed President Trump.

Four years later, with Joseph R. Biden Jr. now leading the charge, Democrats say they’re taking a two-pronged approach: winning back some voters who supported Mr. Trump in 2016, and motivating nonvoters who did not participate last time. (That said, political observers on both sides of the aisle agree that no matter what Mr. Biden’s and Mr. Trump’s campaigns say, they have focused on persuading the voters most likely to turn out, like older and suburban voters.)

Lauren Groh-Wargo, the chief executive of Fair Fight Action, the group started by Stacey Abrams in 2018, said she expected November to be the culmination of a decade of political organizing in Georgia.

“Joe Biden needs multiple paths to the White House,” Ms. Groh-Wargo said. “Notching a win in Georgia helps him get a Democratic Senate, helps him build a really strong mandate.”

For Mr. Lamar Jones, the man who drew a blank upon seeing Mr. Ossoff during early voting in Georgia, his voting path began with help from a nonprofit group. He said a case manager at Trinity House, a group that works with formerly homeless men, had helped him secure the proper documentation and had provided transportation to State Farm Arena, the home of the Atlanta Hawks, which has been turned into a polling location.

In an interview after he voted, Mr. Lamar Jones said he had another reason for getting involved this year: Mr. Trump.

“I thought my vote would count this time,” Mr. Lamar Jones said, “and I didn’t want to see him win again.”

According to data from the 100 Million Project, an effort from the Knight Foundation that studied more than 12,000 people across the country who typically do not vote, his experience is not unique. Nonvoters are not united by party affiliation, but they often have a lack of faith in the electoral process, a lower engagement with news and information than the typical American voter, and a belief that the political process is arduous and exclusive, the survey found.

“I just see it as corrupt and biased on both sides,” said Cory Aksteter, a 26-year-old dock supervisor at a trucking company in Minnesota who supported Senator Bernie Sanders of Vermont in 2016 but abstained from voting.

Mr. Aksteter, who participated in the survey, said he was torn about participating in this year’s election because while he finds Mr. Trump beyond the pale, he does not support the two-party system.

“I think I may go ahead and vote this year to get Trump out of office,” he said. “I think he’s a little more distasteful than Biden. But personally I’m waiting on a total reform of our government.”

Evette Alexander, who helped oversee the Knight Foundation’s study, said the political world’s willingness to accept the voting population as fixed had major repercussions for American democracy. It ensures that the communities with the strongest influence over political choices are whiter, more educated and less representative of the country, she said.

She added that there was a disconnect between the issues that nonvoters care about the most and those that most presidential campaigns prioritize.

“A lot of what you hear in terms of the party platforms, they’re really kind of geared to the concerns of older Americans,” Ms. Alexander said. “There’s a bit of a one-size-fits-all messaging for the baby boomers.”

Republicans have derided efforts from groups like the New Georgia Project, sometimes claiming without evidence that the groups’ registration efforts are attempts at voter fraud. But even in Georgia, Mr. Trump’s push to win the state hinges on maximizing turnout among conservative voters in rural, white communities. That includes registering new voters and finding people who sat out in 2016.

In Macon, Ga., 90 minutes south of Atlanta, Mr. Trump held a rally this month in hopes of keeping the historically Republican state in the red column. There, speakers nodded to Georgia’s changing demographics but said they remained confident it would back Mr. Trump.

Brian Robinson, a Republican consultant in Georgia who has worked with some of the party’s leading candidates, said he believed there was an undersampling of Mr. Trump’s supporters.

“There is a Trump effect: People who will vote for Trump won’t say that they’re going to,” Mr. Robinson said. “Republicans are much more likely to not participate in polling.”

He added: “But I ain’t saying this isn’t competitive. A wave election could make it happen, but I’ll believe it when I see it.”

On the Democratic side, Senate candidates like Mr. Ossoff and the Rev. Dr. Raphael G. Warnock are taking a page from the playbook of Ms. Abrams, the Democrats’ candidate for governor of Georgia in 2018, who targeted new voters in the state’s rural and suburban regions in her run against Gov. Brian Kemp.

Terrence Clark, a spokesman for Mr. Warnock’s campaign, highlighted one such group: Asian-American and Pacific Islander voters in counties like Gwinnett and Cobb, near Atlanta. They are the fastest-growing demographic group in Georgia.

“It’s not just about keeping white women or suburban voters in the column,” Mr. Clark said. “It’s also about finding, where do you turn the dial to expand the electorate further? And you can do that with A.A.P.I. voters and Latino voters and new Americans.”

Mr. Ossoff, in an interview during his early voting visit to the Atlanta sports arena, said: “Georgia becomes younger and more diverse by the hour. And the political infrastructure that has been invested here over the last decade is paying dividends.”

But as always in Georgia, and throughout an American South with a long history of voter suppression, translating a rising demographic tide into a multiracial political coalition has its obstacles. Just ask Mr. Sanabria, one of the prospective voters who arrived with the Trinity House group, who left without casting a ballot.

Mr. Sanabria, 73, did not have the correct government identification. His ID, he said, had not been returned from the food stamp office, where he had needed to mail it to receive his benefits.

“There’s just so much red tape you have to go through,” Mr. Sanabria said. “When even the mail is slow, the most simple things can become difficult.”

Asked if he thought he would get his ID back in time to vote, he shrugged.