In Texas, an Emerging Problem for Democrats on the Border 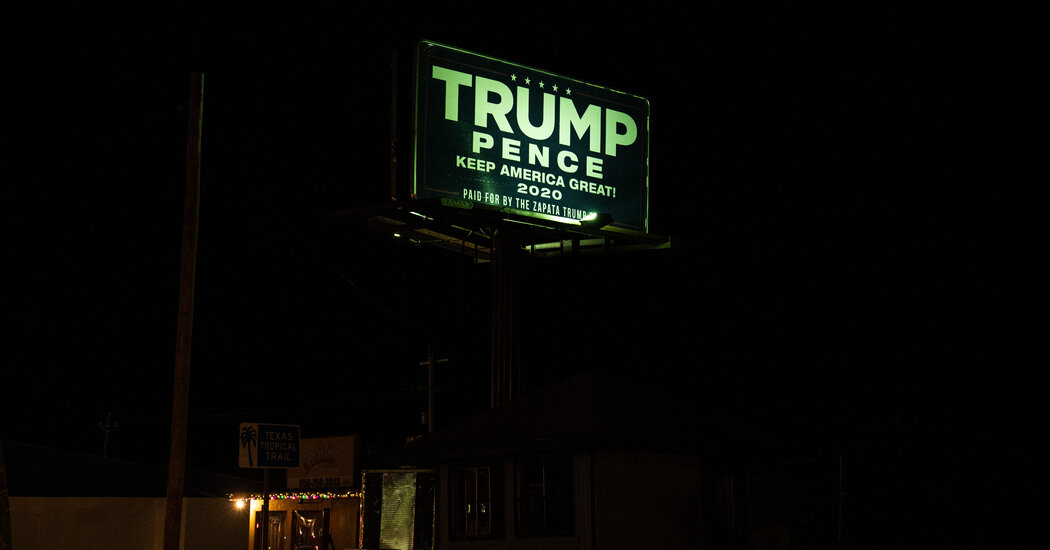 ZAPATA, Texas — Democrats spent years focusing on how they could finally win Texas. But since Tuesday’s election, they have been wrestling with a more pressing question: How did they lose Zapata County?

In the reliably Democratic and majority-Hispanic stronghold of South Texas, Zapata County, population 14,179, had never been a political bellwether. It is a largely rural border community on a narrow stretch of the Rio Grande between Laredo and McAllen, home to oil-field workers and one of the highest poverty rates in Texas.

“When I would tell people I helped a friend sell air fresheners in the shape of Trump’s head, I would apologize because I supported Trump,” said Anna Holcomb, 55, a Latina and former oil-field administrative assistant who lives in Zapata, the county seat.

“Why should I apologize for it? I’m not going to apologize anymore. Just because the president wants people to come into the country the right way, it doesn’t make him a racist. He’s not a racist and neither am I.”

The flipping of Zapata County was one of many Republican victories in a state that Mr. Trump carried. But it stunned Democrats and reflected their enduring struggle in the country’s largest conservative-led state. Not only do Democrats have a problem surging forward, they may be going backward in places.

“When I was running, I’d get 85 percent in Zapata County — and Trump carried it,” said Garry Mauro, 72, a Democrat and former state land commissioner who was the chairman of the Hillary Clinton campaign in Texas in 2016. “The idea that Trump, who has been so overtly racist about Hispanics in particular, was able to do so well has got to be a failure of our party not having a message.”

In the postelection aftermath, a changing Texas remained largely unchanged.

Mr. Trump defeated Joseph R. Biden Jr. in Texas, winning a more narrow victory than he had in 2016 but winning nonetheless. Senator John Cornyn, a Republican, won re-election. Wendy Davis lost again, one of several Democrats who tried and failed to grab Republican-controlled congressional seats. A push to flip the Texas House foundered, as Republicans held on to their majority.

If there is any one force determining how Texans vote, it is neither party nor politics. It is something that resists party labels but has helped transform Texas from a place to a cause — an ideology disguised as a brand disguised as a state. It is a cliché to say Texas is filled with mavericks, but the whole notion of mavericks belongs uniquely to Texas — the word comes from the surname of a Texas rancher and lawyer who left his calves unbranded in the late 1800s, Samuel A. Maverick.

At first glance, Mr. Biden’s support in most of South Texas appears solid. He carried all four of the counties that make up the Rio Grande Valley region, next door to Zapata County. But a closer look reveals the emerging Democratic challenge on the border. Mr. Trump broadened his support in all four, plus in other border counties. In one of those communities, rural Starr County, Mrs. Clinton won in 2016 by 60 percentage points. On Tuesday, Mr. Biden carried it by just five.

South Texas has long been a place where a lot of people are politically liberal but culturally conservative.

Mexican-American families have called Brownsville, McAllen, Edinburg and other Rio Grande Valley cities home not for years but for generations. They identify with their Mexican roots just across the river but identify just as strongly with America. At the formal southern line of the nation, patriotism intensifies, and many an American flag waves in yards and on porches. Young Mexican-American men and women eagerly sign up to become Border Patrol agents. Often, their older relatives and neighbors worked for Border Patrol, and they are proud to do so, too, ignoring the perception of the agency among immigrant families elsewhere in the country.

These working-class and middle-class Mexican-Americans feel compassion for the Central American migrants who have been flooding the border off and on since 2014. Volunteering at migrant shelters and donating clothes and food have become Valley traditions. But many view those migrants as outsiders. The Hispanic migrant in a shelter and the Hispanic longtime Valley resident are culturally and economically disconnected.

Mr. Trump’s support in that context was not surprising.

“I believe that many Mexican-Americans who ordinarily vote Democratic are attracted to his personality,” said State Senator Judith Zaffirini, a Democrat who is Mexican-American and whose district includes Zapata County. “He’s very strong here. I don’t find him appealing but I’m fascinated by his appeal to so many Texans.”

The town of Zapata lies along five traffic lights on Highway 83.

Halloween decorations, hay bales and pumpkins were still up on a highway plaza in the aftermath of the election this week. Payday loan, auto parts and pawn shops outnumber gas stations and restaurants. The gentle western slope down to the Rio Grande gives residents spectacular sunsets and views of Mexico. In town and on the more rural roads around the county, where Border Patrol agents can be seen on hilltops gazing through binoculars across the river, there were an equal number of Trump signs and Biden signs.

Two of the few orchestrated Trump events in Zapata happened in September, when stickers and signs were handed out at a local restaurant and a “Trump Train” caravan rode through town.

But they did not draw huge crowds, and even now, some people who supported him said they feared retaliation for speaking out.

Many Trump voters in Zapata know one another, and they have formed an unofficial booster club and support group. It includes Ricardo Ramirez, 51, the president of a local bank branch, and Jack Moore, 45, an oil-field construction worker who said the Democrats of 50 years ago “are not the same Democrats today.”

Many residents in this part of Texas have strong Christian, anti-abortion, pro-gun and back-the-blue views that put them more in line with conservatives than liberals, and in Zapata, there is a strong sense among his supporters that Mr. Trump will bring jobs to the economically struggling region.

In a brief exchange during the final presidential debate, Mr. Biden had said he would “transition from the oil industry” because of its pollution, a remark that did not go unnoticed by Zapata residents, including Yvette Gutierrez De Leon, 56, who is a secretary for an oil-field services company and who voted for Mr. Trump.

“At the end of the day, in the little bit of oil field that is still left, if it goes away tomorrow our county will go away,” Ms. De Leon said. “Oil is all we have here.”

Isela Gonzalez-Lindquist, 42, a saleswoman at a Laredo mattress store, said she voted for Mr. Trump even though she was opposed to his plans to extend the border wall in the area, because she believed it would hurt wildlife and infringe on the rights of property owners.

“I want to convey that he is not perfect and we know that, but he is the best candidate for the job,” she said. “I like Trump’s grit and that he’s not a career politician.”