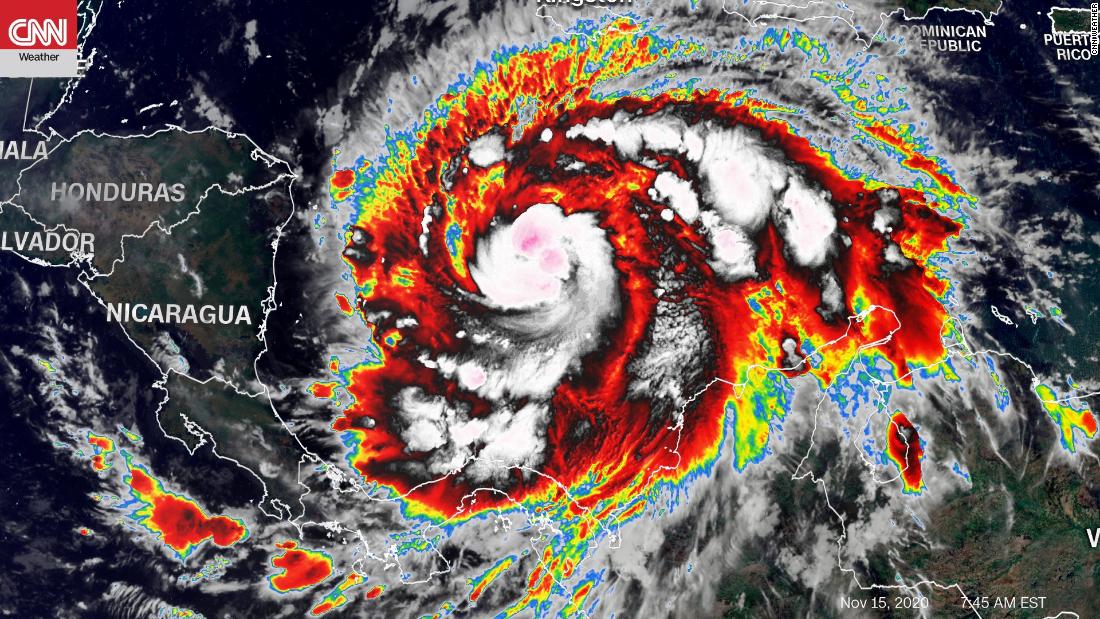 Iota, which formed Friday at sea, was centered in the Caribbean about 380 miles east-southeast of the Nicaragua-Honduras border with maximum sustained winds of 85 mph as of 7 a.m. ET Sunday, the US National Hurricane Center said. It is forecast to continue to rapidly strengthen over the next 24 hours.

Parts of those two countries could receive torrential rain totals of 2 to 3 feet, along with a life-threatening storm surge of 9 to 13 feet.

Besides delivering damaging winds, Iota could drop 8 to 16 inches of rain on Honduras, northern Nicaragua, eastern Guatemala and southern Belize through Thursday, the NHC said — unwelcome news for a region pummeled by Hurricane Eta in early November.

Costa Rica, Panama and northern Colombia could receive 4 to 8 inches of rain through Thursday, while El Salvador and southern Nicaragua could get 2 to 4 inches in the same period, the NHC said.

“This rainfall (from Iota) would lead to significant, life-threatening flash flooding and river flooding, along with landslides in areas of higher terrain,” the NHC said.

Iota is 30th named storm in the Atlantic this year — the most ever for an Atlantic hurricane season.

Eta crossed into northern Nicaragua on November 3 as a Category 4 hurricane, and pounded that country and Honduras, Guatemala and Belize for days with heavy rain. It caused landslides and serious flooding, and left scores of people dead or missing.
The full scope of the damage from Eta likely won’t be known for a while. But the powerful storm, combined with the coronavirus pandemic, may be remembered as one of the worst natural disasters to hit the region.
More than 3.6 million people across Central America have been affected by the storm to varying degrees, the Red Cross said earlier this week.

Even before the storm, Nicaragua, Honduras, and Guatemala had poor public health systems that were struggling against Covid-19.

With thousands in shelters, and social distancing hard to do, many fear that the disease will spread. Hospitals there now also face the burden of combating other illnesses related to the storm and flooding, from dengue to cholera to yellow fever.