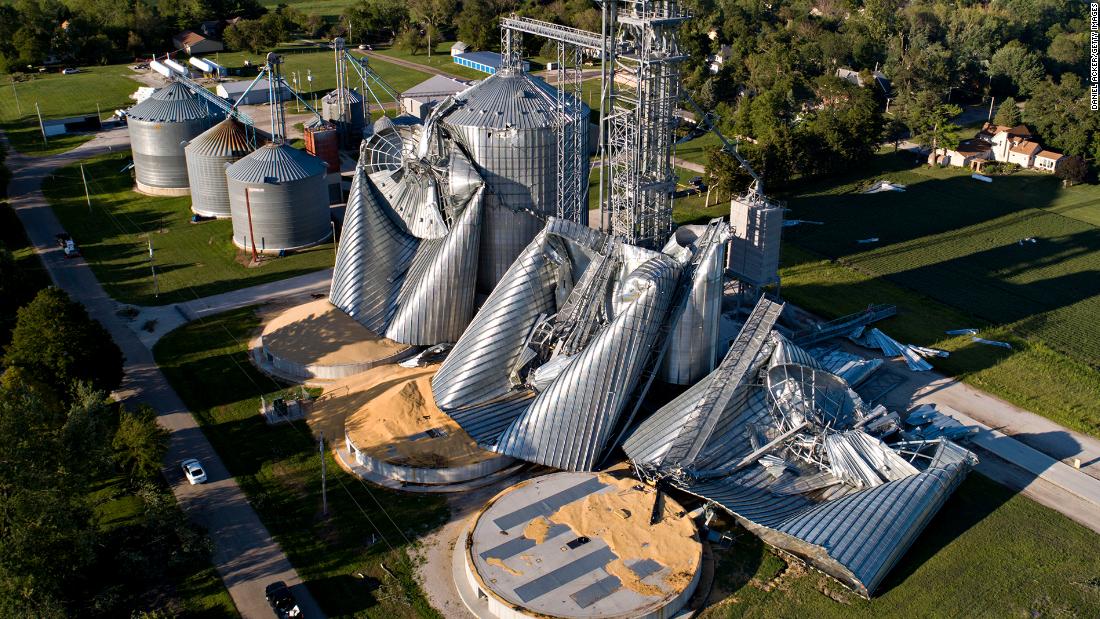 A line of severe storms ripped through the Midwest on Monday, leaving homes destroyed, over a million customers without power in Iowa and Illinois and millions of acres of farmland damaged, officials said.

Reynolds said in a briefing Friday that she spoke with President Donald Trump and Vice President Mike Pence about the damage in the state and the recovery efforts.

The governor had previously signed a disaster declaration for six counties to allow funding for recovery efforts and expanded it to include a total of 25 counties in the past days. About 100 “engineers and civil support” members of the National Guard were on Cedar Rapids on Friday to assist public utility crews in restoring power, Reynolds said.

“Most of us had not even heard about the derecho before then,” Reynolds said, adding that the storms covered over 770 miles and lasted up to 14 hours. “But now we know it all too well.”

An estimated 167,733 customers were still without power on Friday afternoon, according to poweroutage.us, and the outages are expected to continue for several days. The governor said Friday the state’s utility companies “committed” to restore power by Tuesday.
The damage to Iowa’s corn and soybean crops comes as farmers were already facing drought conditions and it’s likely to take a toll on the state’s estimated $10 billion industry. The state is the top corn producer in the United States and it is harvested between late September and mid-October.
One of the hardest hit cities by the storm was Cedar Rapids, where more than 20 school buildings were damaged, and some neighborhoods were still covered in tree debris. In Linn County, a biker who was struck by a fallen tree while on a trail during the storm died, the county’s sheriff’s office said.

The majority of all residential and commercial building in Cedar Rapids had some damage, including more than 800 that suffered full or partial collapse of the roof, walls, ceiling or floors, Cedar Rapids Fire Chief Greg Smith told reporters on Friday.

“You know it’s tough,” Reynolds told KCRG on Thursday. “You know when you look at COVID and the impact of that and you know we’re trying to get life and livelihoods back to normal and then to be hit with a storm of this magnitude and a disaster of this magnitude, people are tired, they’re worn out.”

The storm system was classified as a derecho, and it exceeded the criteria of winds in excess of 58 mph and damage spanning at least 250 miles. Winds reached more than 100 mph as the storms moved through Iowa and Illinois.

A derecho can produce destruction similar to that of a tornado, but the damage typically occurs in one direction along a relatively straight swath. The term “straight-line wind damage” sometimes is used to describe derecho damage, according to the National Weather Service’s Storm Prediction Center.