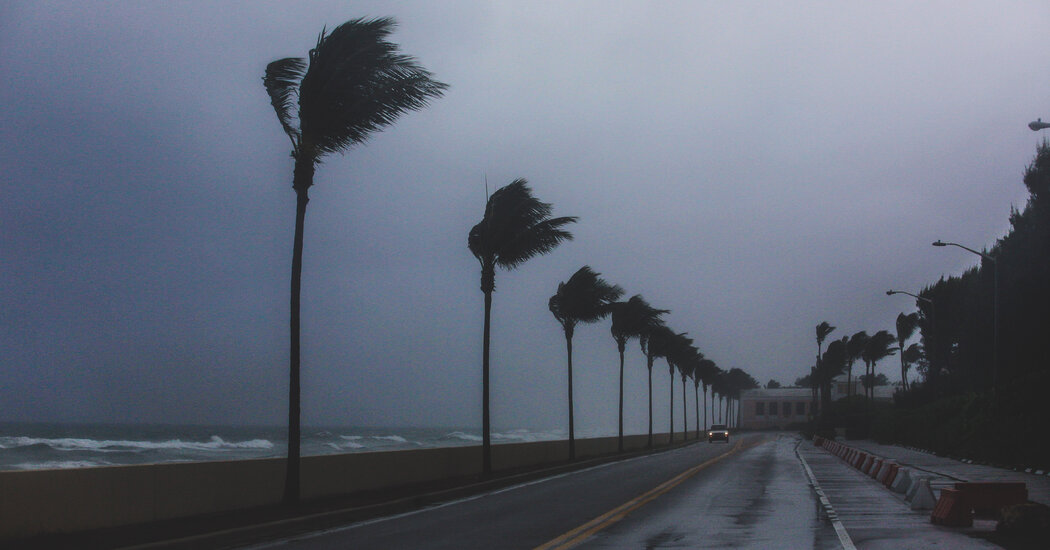 Bracing for drenching rain and heavy winds, Floridians are hunkering down on Sunday as Tropical Storm Isaias whips the state’s east coast, driving storm surges of two to four feet and the threat of flash flooding as it goes.

At 8 a.m. Eastern time, the center of the storm was about 40 miles offshore, east of West Palm Beach, Fla., and was moving northwest at about eight miles an hour, according to the National Hurricane Center. Its powerful right-hand side was continuing to lash the northwestern Bahamas.

Isaias — (which is written Isaías in Spanish and pronounced ees-ah-EE-ahs) — clobbered the Bahamas with hurricane conditions on Saturday after hitting parts of Puerto Rico and the Dominican Republic. It was downgraded to a tropical storm Saturday evening when its sustained winds slipped below 74 m.p.h.; they were about 65 m.p.h. at 8 a.m. Sunday. Forecasters said on Sunday that they were expecting only minimal changes in strength for the next few days.

Flooding from the storm’s heavy rains led to the death of at least one person in Puerto Rico, the island’s Department of Public Safety said on Saturday in a statement. A woman who had been missing since Thursday drowned near Rincón, in the northwest portion of the island.

As it advances northward, the center of the storm may skirt close to the coast of Florida without making landfall, or it may come ashore briefly on Sunday, forecasters said. Officials in Georgia, South Carolina and North Carolina were closely monitoring the storm, which is expected to affect the coasts of any of those states. Forecasters said the storm had the potential to spawn tornadoes in the Carolinas on Monday.

Complicating the emergency response to the storm, reported coronavirus cases continue to rise sharply in all four of those states, and health officials have warned that their health care systems could be strained beyond capacity with the influx of new patients. The situation would worsen if the storm knocks out power across wide areas or forces evacuations of hospitals and nursing homes.

Emergency management officials have been drawing up new plans to accommodate people who must flee their homes, including placing evacuees in hotel rooms instead of shelters like converted school gymnasiums.

Astronauts aim to splash down in the Gulf, avoiding the storm.

Two long-haul travelers taking a red-eye flight from the International Space Station are on track to land in the Gulf of Mexico off the Florida panhandle on Sunday, working their way around Isaias’ rough weather.

Robert L. Behnken and Douglas G. Hurley, the astronauts who blasted off to the space station in May in the Crew Dragon capsule built and operated by SpaceX, the rocket company started by Elon Musk, pushed off from the orbiting outpost on Saturday night. They are scheduled to splash down at 2:48 p.m. Eastern time.

NASA and SpaceX selected seven potential sites in the Atlantic Ocean and Gulf of Mexico where the capsule and its passengers could splash down. But the track of Isaias ruled out the three in the Atlantic, so they chose a site near Pensacola.

At the splashdown site, winds must be less than 10 miles an hour, and there are additional constraints on waves and rain. In addition, helicopters that take part in the recovery of the capsule must be able to fly and land safely.

In the event that weather conditions prevented a splashdown at the landing site, the astronauts and the capsule could remain in orbit for another day or two, and the mission’s manager would consider alternate sites.

Florida is going through a summer of dread.

Summer in Florida, with its routine thunderstorms, sweaty nights and unforgiving mosquitoes, is not for the faint of heart. But the summer of 2020 is proving especially despairing, Patricia Mazzei, our Miami bureau chief, writes.

A public health crisis. An economic calamity, with more than a million Floridians out of work and an unemployment payment system that was one of the slowest in the country. And now an early debut of hurricane season, to remind Florida that the inevitable convergence of the pandemic and the weather is likely to play out again, and perhaps much more seriously than this relatively mild storm, before this nightmare season ends.

It should be too early to worry much about storms in Florida, Ms. Mazzei writes, but this annus horribilis would not have it any other way.

“It’s just kind of been the way 2020’s gone so far,” said Howard Tipton, the administrator for St. Lucie County, on Florida’s Treasure Coast. “But we roll with it, right? We don’t get to determine the cards that we’re dealt.”

Kevin Cho, 31, a Florida National Guard captain and a nurse practitioner who treats Covid-19 patients in the intensive care units of several Miami public hospitals, said the approach of the storm was “really stretching our limits.”

Many poor people contracting the disease “are losing their jobs, and now they’re faced with a hurricane,” he added. “How could they prepare for a hurricane when they have been exhausted of every resource they have? This hurricane is only going to make things worse.”

While Isaias’ winds remain capable of significant damage, its heavy rains may be the biggest punch the storm packs, especially in the Bahamas. Forecasters said totals of 4 to 8 inches of rain were likely there before the storm passes, with isolated areas of 12 inches — more than enough to cause potentially deadly flash flooding.

Much of the East Coast of the United States will also get a soaking, though the totals are not expected to be as extreme as that. Two to four inches are expected in most of eastern Florida, with isolated areas of up to six inches. Northeast Florida will get a little bit less, as the storm’s center tracks offshore, but the eastern Carolinas and coastal Virginia will get a bit more as the storm makes landfall there, forecasters said.

The storm will still be dumping 2 to 4 inches of rain in its path, with up to 6 possible in some areas, when it reaches New Jersey, New York and New England Tuesday and Wednesday.

Nursing homes, already tested by the pandemic, may be vulnerable.

Lawmakers passed regulations after air-conditioners failed at one home in 2017, leading to heat-related deaths. They mandated that nursing homes install backup generators in case of severe weather.

But this May, the state issued 95 variances — passes that allow facilities to operate despite noncompliance — to nursing homes that had not met the emergency requirements, according to The Miami Herald.

The former ombudsman, Brian Lee, who now runs Families for Better Care, an advocacy group for nursing home and elder-care residents, said he doubted state officials who said the nursing homes were prepared.

“I can’t imagine that these facilities are prepped and ready to handle a pandemic and a hurricane simultaneously,” Mr. Lee said. “They are going to be over their heads and under water. It is a total recipe for disaster.”

Kristen Knapp, a spokeswoman for the Florida Health Care Association, which lobbies for nursing homes, said that not every nursing home that applied for a variance was without a generator. Some facilities applied for other reasons, including that they had not been able to perform inspections because of the coronavirus, she said.

An agency spokesman said in an email that all nursing homes and assisted living facilities have generators on site.

Some facilities plan to shelter in place rather than evacuate residents. Mr. Lee said he was concerned that social distancing would be impossible if dozens of residents were gathered in a common space.

“You get 120 residents and their caregivers in a large room in the middle of a pandemic — social distancing is out the window,” Mr. Lee said. “This pandemic is really a threat to the residents in these facilities, not just from a health care perspective, but for natural disasters as well.”

Gov. Ron DeSantis said on Friday that state-run coronavirus testing sites, which are mostly housed under tents at outdoor venues, will be closed if they are within Isaias’s anticipated path.

Many testing sites would be unsafe for lab personnel during the storm’s wind and rain, Mr. DeSantis said during a news conference on Friday. Labs run by private companies, hospitals and local county health departments will not be affected by the state’s closure.

The governor, a Republican, had planned to close all of the state’s testing sites from Friday to Wednesday. But the Division of Emergency Management eventually said it would keep testing sites open in counties that should be unaffected.

In Miami-Dade County, the center of Florida’s coronavirus outbreak, Mayor Carlos Gimenez ordered the county-run sites to close from Friday until at least Monday.

The county has recorded more than 20,000 cases in the past seven days.

“We have thousands of tests that will not be conducted until we get these test sites up and running again,” Mr. Gimenez said during a news conference on Friday. “We have to put safety first.”