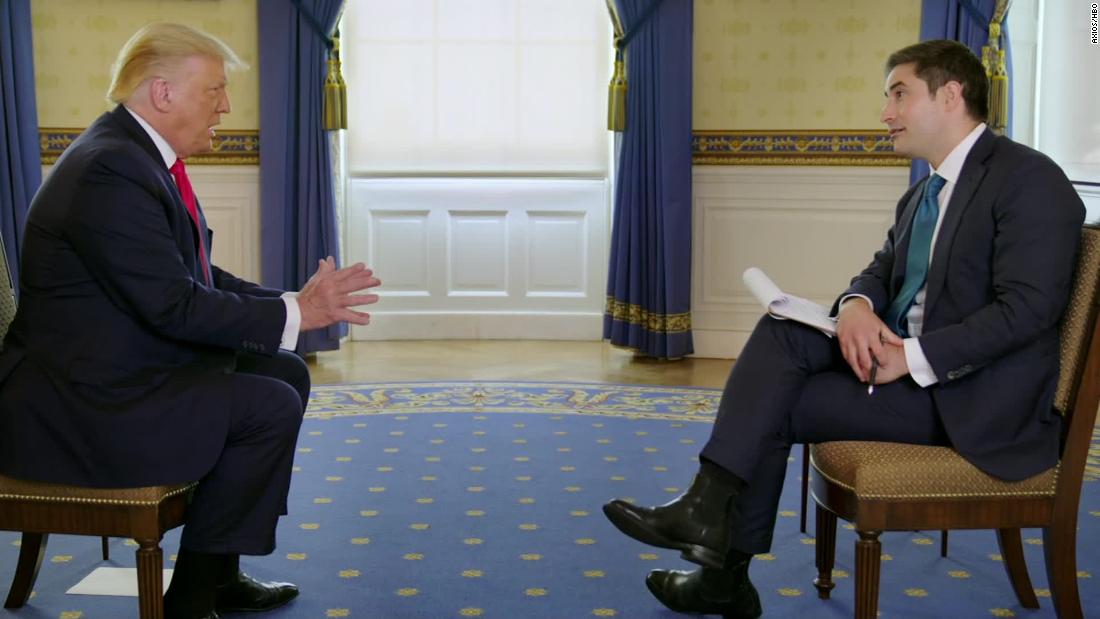 In an interview that aired Monday night on “Axios on HBO,” Swan demolished some of Trump’s most dishonest talking points with a powerful tactic that has rarely been used by the people Trump has allowed to interview him:

Many of Trump’s interviewers are right-wing sycophants who have no interest in challenging him. But Trump has defeated even his other interviewers by employing a strategy we can call the hit-and-run — saying dishonest stuff, then darting ahead to other dishonest stuff before the interviewer reacts.
Swan — like Fox News’ Chris Wallace, to a slightly lesser extent, in an interview that aired July 19 — came armed with facts and prepared to use them, even if he had to interrupt Trump like Trump interrupts others.

And Trump wasn’t ready to respond.

Take their exchange about coronavirus testing. Trump uttered a version of his now-familiar refrain about how testing is overrated — attributing this nonsense to unnamed “those that say.” Swan pressed for details.

Trump: “You know, there are those that say you can test too much, you do know that.”

Trump moved on without offering a direct answer. While Swan couldn’t get the President to concede that he is making up these “manuals” and “books,” he exposed him nonetheless.

Swan had similar success when Trump returned to his laughably inaccurate claim that the virus is “under control,” which he has now been making for more than six months.

Trump: “Right now, I think it’s under control. I’ll tell you what –“

Trump: “They are dying. That’s true. And you have — it is what it is. But that doesn’t mean we aren’t doing everything we can. It’s under control as much as you can control it.”

Again, Trump didn’t explicitly surrender. But Swan’s basic follow-up — a “how?” and a single key statistic — forced Trump into a de facto surrender (“It’s under control as much as you can control it”) and another revealing remark, “It is what it is.”

Trump made at least 17 additional false claims in the 35-minute interview. (We’re still reviewing the transcript, so the final total might be higher.)

An incident in Portland: When Swan mentioned “disturbing footage of people in fatigues beating the Navy veteran” in Portland, Trump said “no” repeatedly and then said, “Fake news.” (There was nothing fake about what Swan said. As Swan noted, the beating of protester Chris David was captured on video.)
NBC and Portland: Trump claimed that Lester Holt’s NBC news program misleadingly depicted Portland Mayor Ted Wheeler’s July 23 visit to a protest site by portraying Wheeler as a friend of protesters. (The NBC Nightly News segment that evening explicitly noted that protesters were unhappy with Wheeler: “Ted Wheeler, who’s also Portland’s police commissioner, was booed by protesters, who criticized his leadership of Portland’s police.” There is no evidence for Trump’s claim protesters “would have killed him” if not for his security team.)
The Portland courthouse: Trump claimed that the federal courthouse in Portland, which has endured damage from some of the protesters in the city, is a “$600 million building.” (The courthouse cost a reported $129 million to build in the 1990s; even with inflation, that is roughly $200 million in today’s dollars. Trump claimed last week that it was a “billion-dollar building.”)
Penalties for courthouse damage: Trump claimed, “We now have a 10-year rule. You knock down — you try and knock down — our courthouse, you touch our courthouse, you go to jail for 10 years.” (There is not a “rule” that anyone who touches or damages the courthouse goes to jail for 10 years. This is the maximum penalty a judge can choose to impose, under a decades-old federal law, for destroying federal property. In June, Trump issued an executive order declaring that people who damage monuments or federal property will be prosecuted “to the fullest extent” under existing laws, but he did not create any new laws.)
Coronavirus cases: Trump claimed that “we have cases” of the coronavirus “because of the testing.” (Testing does not create cases, just reveals their existence — and, in fact, testing is a pandemic-fighting tool that is supposed to help reduce the number of actual cases.)
South Korea’s death toll: Trump cast doubt on Swan’s correct statement that South Korea has 300 deaths from the coronavirus, saying, “You don’t know that.” When Swan pressed him on whether he thinks South Korea is faking its statistics, Trump said, “I won’t get into that because I have a very good relationship with the country. But you don’t know that.” (South Korea had precisely 301 confirmed deaths as of Tuesday; there is no basis to claim the country is faking its data. Many countries, including South Korea and the US, likely have more actual coronavirus deaths than have been confirmed to date, but Swan was correctly using the available numbers.)
The US presence in Afghanistan: Trump claimed the US is “largely out of Afghanistan.” (“Largely” is vague, but as Swan noted, the US still has more than 8,000 troops in Afghanistan.)
The number of troops in Afghanistan: Trump told Swan “you’re wrong” for saying that the current number of troops in Afghanistan is roughly the same as the number when Trump took office. (Swan was right.)
Trump’s 2016 margin: Trump claimed he beat Hillary Clinton “306 to 223” in the Electoral College in 2016. (Clinton earned 232 electoral votes; we know this is a small thing, but Trump has said “223” 12 times since July 2019.)
The history of mail-in voting: Trump claimed, “We have a new phenomenon. It’s called mail-in voting.” (As Swan noted, Americans have voted by mail all the way back to the Civil War. Trump clarified that he was saying mail-in voting is now going to be used more than it has before, which is fair, but that doesn’t make it “new.”)
Mail-in voting and fraud: Trump claimed, “There is no way you can go through a mail-in vote without massive cheating.” (There is no evidence of massive cheating with mail-in voting — and five states, including conservative Utah, have previously conducted fair elections almost entirely by mail.)
Absentee voting: Trump again argued that “absentee” voting is fair but other mail-in voting is not. (There is no real difference; many states, like Florida, where Trump himself votes by mail, make no distinction at all between people who vote by mail while in the state or while out of the state.)
Travel restrictions: Trump claimed he put a “ban on China” and a “ban on Europe.” (He imposed pandemic travel restrictions on both China and Europe, but neither was a full “ban”; he exempted citizens and permanent residents, many of their family members, and entire European countries.)
China and trade: Trump suggested China is paying the tariffs on imported Chinese products (American importers make the actual tariff payments, and studies show Americans are bearing the cost) and that China had its worst year in “67 years” before the pandemic (China’s official GDP growth in 2019, 6.1%, was the lowest in 29 years).

Black Americans: Trump claimed that he has done “more for the Black community than anybody with the possible exception of Abraham Lincoln, whether you like it or not.” When Swan asked him specifically if he thinks he did “more than Lyndon Johnson, who passed the Civil Rights Act,” Trump said yes. (We give Trump wide latitude to express opinions, but this one is ridiculous. Lincoln, who emancipated the slaves and won the Civil War, is a certain exception, not a possible exception; Johnson’s monumental Civil Rights Act and Voting Rights Act clearly dwarfed the impact of any of Trump’s policies.)