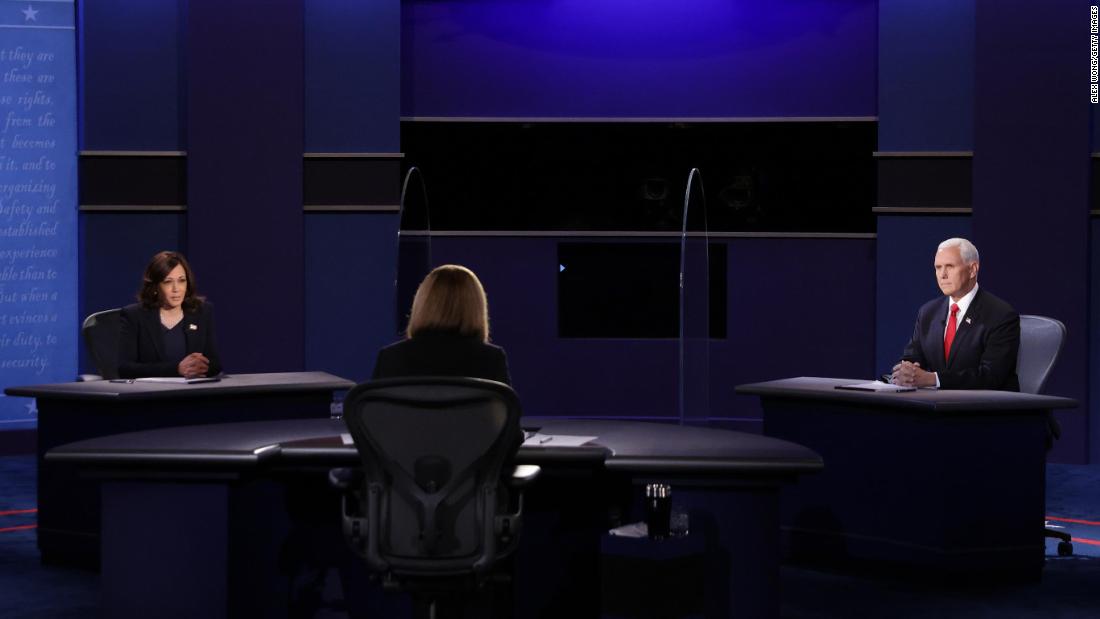 “The American people have witnessed what is the greatest failure of any presidential administration in the history of our country,” Harris said, arguing that frontline workers had been treated like “sacrificial workers” and that Trump had repeatedly minimized the seriousness of the virus, while discouraging people from wearing masks.

“Today they still don’t have a plan. Well, Joe Biden does,” Harris said. “We need to save our country” she said, adding that the current administration had forfeited its right to a second term through its mishandling of the pandemic.”

In a torrent of developments since the first presidential debate last week, President Donald Trump tested positive for coronavirus, was hospitalized for treatment and then returned to the Oval Office on Wednesday after a little more than a day of isolation at home. It’s still unknown when the President last tested negative for the virus. At the same time, White House aides and Trump allies are testing positive, many of the nation’s top military leaders are quarantining after they were exposed to a colleague with Covid-19 and negotiations over an economic rescue package have stalled after Trump unexpectedly halted them Tuesday in a tweet.

Those developments have put Pence, who heads the White House coronavirus task force, on defense at a time when the Trump campaign desperately needs a reset. Harris is set to make history as the first Black and South Asian female Democratic vice presidential nominee to participate in a general election debate.

Pence admitted that “our nation has gone through a very challenging time this year,” thought he also insisted: “But from the very first day President Donald Trump has put the health of America first.”

Covid at the center of the campaign

The President’s Covid-19 diagnosis and the widening circle of infected aides have made the administration’s reckless handling of the coronavirus the central issue of the campaign once again, and questions still surround Pence’s exposure to coronavirus less than a week after Trump tested positive.
The virus is still one of the top issues on the minds of Americans, who are already voting less than a month before Election Day. In recent days, Trump has slid even further behind Biden in the polls — a nationwide CNN poll released Tuesday showed the President trailing his opponent by 16 points — as Americans recoil from his erratic behavior and his disregard for the dangers of the virus.

Pence was forced to answer for the President’s lax handling of the virus, as well as Trump’s decision to reject the advice of scientists and top medical advisers by continuing to hold rallies and events with huge crowds of supporters who did not socially distance or wear masks.

Despite those political events, which flouted expert medical advice in the middle of a pandemic and gathered large crowds at a time when many Americans are forced to stay away from family and friends to prevent transmission of the disease, Pence accused Harris of being part of an effort to play politics with the pandemic.

“You continue to undermine public confidence in a vaccine,” Pence said to Harris, noting she has questioned the safety of a potential coronavirus vaccine because she feels Trump has politicized the speed of vaccine production. “Stop playing politics with people’s lives.”

Pence was at the White House receptions and the Rose Garden announcement for Barrett, events that appear to have accelerated the spread of the virus at the White House. He has repeatedly tested negative, as recently as earlier on Wednesday, and has not quarantined. He and Harris are separated during the debate by plexiglass shields, which are more than 12 feet apart.

Pence tried to deflect the senator’s critique by painting it as a rebuke of the American people who have endured hard times and first responders who put themselves in danger.

“I am going to speak up on behalf of what the American people have done,” Pence said, and defended the administration by noting that it has been pushing scientists and pharmaceutical companies to produce a vaccine in record time.

At one point Pence tried to interrupt Harris while she was criticizing the administration’s handling of the pandemic, and Harris was quick to cut him off. “Mr. Vice President, I am speaking,” she said.

Harris dismissed Pence’s claims to be speaking on behalf of the American people.

“You respect the American people when you tell them the truth,” she said.

Pence on the defense over Trump’s record

At times it seemed as if Pence did not realize who he had been working with over the last four years.

Pence, who works for a President who is a serial liar and who trades in gross misinformation, accused Harris of being untruthful when she told voters that if they had a pre-existing health condition “they are coming for you.”

Harris forced Pence to defend Trump’s time in office early and often in the debate, pressing him on the economy, trade deals, climate change and health care in addition to the coronavirus response.

The California senator spared no moment to press the vice president on the controversies facing the President. Harris turned a question about the transparency of the health records of Trump and Biden into a swipe at Trump’s failure to pay federal income taxes in 10 of 15 recent years and for paying only $750 in 2016 and 2017 each.

“It would be really good to know who the President of the United States, the commander in chief, owes money to,” she said.

Pence shook his head and asserted that the President had said those reports are “not accurate.” He also claimed that Trump has paid tens of millions of dollars in taxes and released “stacks” of financial disclosure forms.

Pence argued that Trump’s experience in the corporate world had helped build an economy that was roaring before the pandemic hit.

The vice president attacked Biden’s economic policies, and said that he would raise taxes on working Americans that would harm the nation’s economic recovery. He defended the aid that was approved by Congress in partnership with the White House, saying, “We literally have spared no expense to help the American people and the American worker through this.”

“You lost that trade war,” Harris said, accusing the administration of shedding 300,000 manufacturing jobs and pitching farmers into bankruptcy.

Pence jumped at an opening, hitting Biden over his vote as a senator to approve permanent normal trading relations with China, which opened the way for the Asian giant to join the World Trade Organization and subsequently to an explosion in its economic development.

“Lost the trade war with China? Joe Biden never fought it. Joe Biden has been a cheerleader for China for the last several decades,” Pence said.

While vice presidential debates generally have not made much of a difference in the outcome of the election, voters may pay more attention to this one because of the age of the two men at the top of the ticket.

Democratic nominee Joe Biden, who is 77, won the primaries after portraying himself as a bridge to the next generation of Democratic leaders — and Harris, 55, was seen as the embodiment of that idea when he chose her as his running mate and made her the heir apparent within the party.

The 74-year-old Trump’s Covid diagnosis has focused even more attention on his age. And because of the lack of transparency from White House doctors, it is unclear whether he could face medical complications during his bout with the coronavirus. Regardless, Pence, 61, has long been viewed as one of the top Republican contenders for the White House in 2024.

Tuesday’s CNN/SSRS poll showed Biden opening his widest lead over Trump this cycle, 57% to 41%, after their contentious first debate in Ohio and the President’s Covid-19 diagnosis. Biden has a narrower lead over Trump in the battleground states that will determine the outcome in the Electoral College.

In the wake of that poll, the Trump campaign — and senior Republicans on Capitol Hill — told CNN’s Jeff Zeleny that Wednesday may be one of the last best opportunities to try to reset this race.

“If we don’t slow the bleeding tonight, the remaining three weeks could be grim for Republicans,” a Republican senator close to the White House said. “Everyone in the party knows that.”