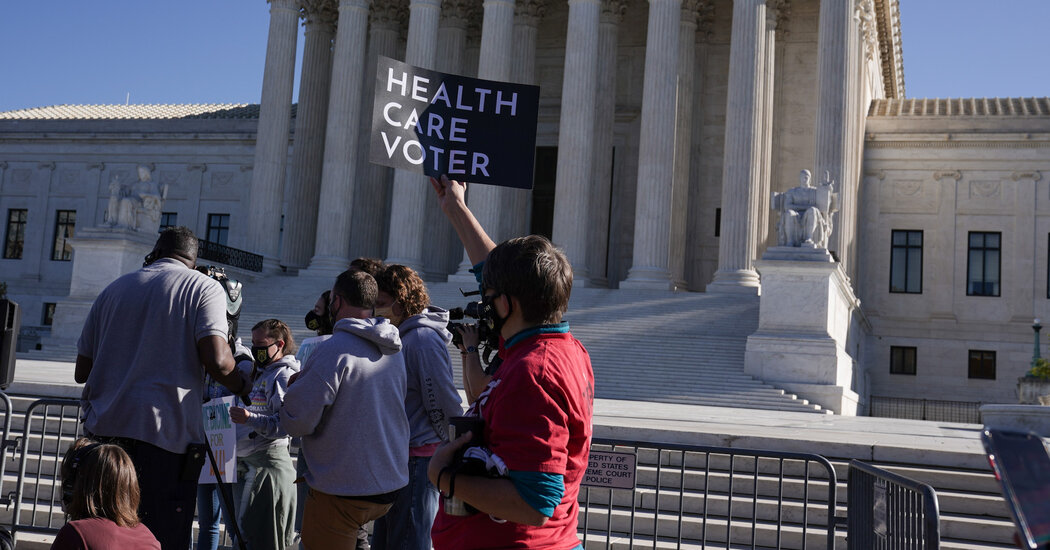 WASHINGTON — The bulk of the Affordable Care Act, the sprawling 2010 health care law that is President Barack Obama’s defining domestic legacy, appeared likely to survive its latest encounter with the Supreme Court in arguments on Tuesday.

It was not clear whether the court would strike down the so-called individual mandate, which was rendered toothless in 2017 after Congress zeroed out the penalty for failing to obtain insurance.

But at least five justices, including two members of the court’s conservative majority, indicated that they were not inclined to strike down the balance of the law. In legal terms, they said the mandate was severable from the rest of the law.

“It does seem fairly clear that the proper remedy would be to sever the mandate provision and leave the rest of the law in place,” said Justice Brett M. Kavanaugh.

Chief Justice John G. Roberts Jr. made a similar point. “Congress left the rest of the law intact when it lowered the penalty to zero,” he said.

Tens of millions of Americans gained insurance coverage under the 2010 law, which includes popular provisions on guaranteed coverage for pre-existing medical conditions, emergency care, prescription drugs and maternity care. Republican state officials, backed by the Trump administration, say that a key provision of the law is unconstitutional, and that this means the whole law must fall.

The law has survived two earlier challenges in the Supreme Court. In 2012, the court upheld the law’s requirement that most Americans obtain insurance or pay a penalty — the “individual mandate.” The vote was 5 to 4, with Chief Justice Roberts writing the controlling opinion, which said the mandate was authorized by Congress’s power to assess taxes. He was joined by what was at the time the court’s four-member liberal wing.

In 2015, the court said the federal government could provide nationwide tax subsidies to help poor and middle-class people buy health insurance, rejecting an argument that the subsidies were available only in states that had created marketplaces, known as exchanges, to allow people who lack insurance to shop for individual health plans. A contrary ruling would have created havoc in the insurance markets and undermined the law. The vote was 6 to 3, with the four liberals, the chief justice and Justice Anthony M. Kennedy, who retired in 2018, in the majority.

Since the last major challenge, three new justices have joined the court, all appointed by President Trump. One of them, Justice Amy Coney Barrett, has been publicly critical of the earlier rulings.

In a 2017 law review article, she questioned the chief justice’s 2012 opinion. “Chief Justice Roberts pushed the Affordable Care Act beyond its plausible meaning to save the statute,” Justice Barrett wrote.

In an interview after the 2015 decision, she said, “I think the dissent has the better of the legal argument.”

“That’s not to say the result isn’t preferable,” Judge Barrett said at the time. “It’s clearly a good result that these millions of Americans won’t lose their tax subsidies.”

The new case, California v. Texas, No. 19-840, was brought by Republican officials who said the mandate became unconstitutional after Congress in 2017 zeroed out the penalty for failing to obtain health insurance because it could no longer be justified as a tax.

They went on to argue that the mandate was a crucial feature of the law, meaning that every other part of it should be wiped out.

The challenge has largely succeeded in the lower courts. A federal judge in Texas ruled that the entire law was invalid, but he postponed the effects of his ruling until the case could be appealed. In December, the United States Court of Appeals for the Fifth Circuit, in New Orleans, agreed that the mandate was unconstitutional but declined to rule on the fate of the remainder of the health law, asking the lower court to reconsider the question in more detail.

Democratic states and the House, which intervened in the case to defend the health law, asked the Supreme Court to intervene, saying a prompt decision was needed to remove the uncertainty caused by the lower courts’ decisions.

The law’s defenders are hoping that the Republican challengers cannot run the table on three separate legal arguments they would need to win: that they have suffered the sort of injury that gives them standing to sue; that the zeroing out of the tax penalty made the individual mandate unconstitutional; and that the rest of the law cannot stand without the individual mandate.

The Republicans also face the challenge of the enormous practical effects of striking down the law. Doing so would increase the ranks of the uninsured in the United States by more than 20 million people — a nearly 70 percent increase — according to new estimates from the Urban Institute.

The biggest loss of coverage would be among low-income adults who became eligible for Medicaid under the law after all but a dozen states expanded the program to include them. But millions would also lose private insurance, including young adults whom the law allowed to stay on their parents’ plans until they turned 26 and families whose income was modest enough to qualify for subsidies under the law that help pay their monthly premiums.

Tuesday’s arguments, which will be heard by telephone, are scheduled for 80 minutes but are likely to last two hours or longer. Michael J. Mongan, the solicitor general of California, representing a coalition of liberal-leaning states, will defend the law; Kyle D. Hawkins, the solicitor general of Texas, representing a coalition of conservative-leaning states, will urge the justices to strike it down.