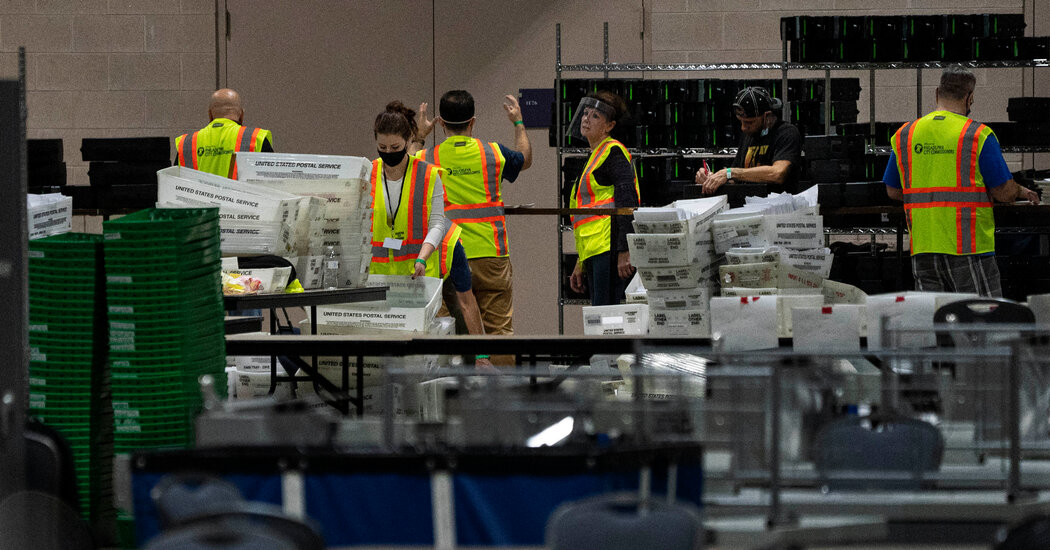 Joseph R. Biden Jr. on Friday took the lead in Pennsylvania, where a victory would give him the presidency, and was ahead in three other critical battlegrounds as his campaign focused on a presidential transition process and states worked to tally the remaining votes.

President Trump and his political lieutenants spent the day continuing to float baseless conspiracy theories about the legitimacy of the election, and Republicans in several states threatened or took legal action aimed at slowing or halting the counting of ballots. But there were also mounting indications that Mr. Trump would not have the full support of his party if he persisted in a scorched-earth effort to impede the electoral process.

Mr. Biden and his team projected confidence, after overtaking Mr. Trump in the vote count in both Pennsylvania and Georgia early Friday.

But in both states, as well as in Arizona and Nevada, Mr. Biden was not yet leading by a sufficiently wide margin to completely foreclose any possibility — however remote — that the count could still turn against him. On Friday evening, Mr. Biden was ahead in Pennsylvania and Georgia by less than a percentage point, and by not much more than that in the two Western states.

Should Mr. Biden win any combination of two states, or the state of Pennsylvania alone, he would clinch a majority of votes in the Electoral College.

Republican strategists and Trump allies concede that it is highly probable that Mr. Biden will cross that threshold soon enough, and that he may ultimately carry all four of the states in question. In three of them, the remaining ballots are seen as likelier to favor Mr. Biden than Mr. Trump; in the fourth, Arizona, Mr. Trump gained ground on Mr. Biden but perhaps not by a sufficient amount to erase the former vice president’s lead.

Mr. Biden was expected to speak Friday night and address the state of the race broadly, as he had the previous two days. Campaign advisers also indicated that they were ready to begin naming senior officials in an anticipated administration in a matter of days, if the race is called in his favor.

In Georgia, Mr. Biden went into the lead overnight Thursday, thanks to a vote tally from Clayton County, a Democratic-leaning area near Atlanta. Secretary of State Brad Raffensperger, a Republican, said the state remained “too close to call” and predicted that it was headed for a recount, given that Mr. Biden’s lead stood at a mere 4,000 or so votes out of five million cast.

Mr. Biden held a lead of about 30,000 votes in Arizona, after a new tranche of ballots from Maricopa County, the state’s population center, helped Mr. Trump close the gap by about 7,000 votes on Friday night.

Katie Hobbs, the Arizona secretary of state, said on CNN that 173,00 ballots remained to be counted statewide, including 92,000 in Maricopa County.

In Nevada, Mr. Biden picked up about 2,500 votes in the Las Vegas area, officials said late Friday, giving him a lead of more than 22,000. Tens of thousands of ballots remain to be counted, but they continue to favor Mr. Biden.

It was in Pennsylvania, though, where the race seemed to turn emphatically in Mr. Biden’s direction. Early Friday morning, a few thousand votes from Philadelphia were posted, vaulting the former vice president into the statewide lead and setting off joyous celebrations in the city where Mr. Biden formally began his campaign last year and has long considered a second home. By Friday evening, Mr. Biden was leading in the state by just under 22,000 votes.

Outside the city’s convention center, jubilant Biden supporters danced along a blockaded part of the street as a D.J. with a speaker system blasted music. They unfurled a banner declaring “The People Have Spoken.”

Bernadette Golarz, 36, a nurse from Philadelphia, said she was celebrating because she expected Mr. Trump to be defeated.

“We’re here to make sure every vote counts,” she said. “We want to make sure that our voters are counted and that our democracy is not stolen from us. We’re celebrating everybody’s right to vote and the fact that we all showed up to put him out.”

Pennsylvania Democrats, however, were growing frustrated by the slow count and were eager for Philadelphia and Pittsburgh to post more returns.

In what appeared to be another attempt to create an artificial sense of uncertainty around the vote count, the Pennsylvania Republican Party appealed to the U.S. Supreme Court on Friday, asking it to order state election officials to separate mail-in ballots that arrived after Election Day from all the other votes they were tabulating — even though Republicans acknowledged in the filing that Pennsylvania’s secretary of state had already issued an order to that effect.

The attempt to involve the Supreme Court came as part of a larger legal fight over mail-in balloting rules in Pennsylvania, in which the high court has already declined twice to get involved. But state authorities said there were fewer mail-in votes arriving after Tuesday than they had anticipated, suggesting that the stakes in the litigation might be relatively low.

Late Friday, a federal court in Nevada denied an injunction request by Republicans that could have delayed the count here by several days. The G.O.P. wanted to stop the use of a signature verification machine in Clark County, home to Las Vegas and a stronghold of Democratic votes. Judge Andrew Gordon of U.S. District Court refused to wade in, saying that the plaintiffs lacked evidence that the automatic scanner was affecting voters.

So far, lawsuits brought by Mr. Trump and other Republicans this week have had no meaningful effect on the tabulation of ballots, and they seem designed largely or even entirely for public-relations purposes. The Trump campaign has not outlined a theory of how its various legal interventions could actually lead to a reversal in the underlying vote count.

On Friday, Mr. Trump vowed to exhaust all legal options available to him, making his case in an emailed statement to the news media by his campaign.

Campaign officials met with White House officials on Friday, including the White House counsel Pat Cipollone, an administration official confirmed, but the legal path forward for Mr. Trump to contest the validity of the election results wasn’t resolved.

Mr. Trump has been as angry in private as he has been in public, people who have spoken to him said. One adviser said the president wants “fighters” defending him and is as concerned with the news media battle as he is with the legal challenges.

Fleeting efforts to gently make him understand that the situation is bleak and unlikely to change haven’t been successful. And he is being egged on by Rudolph W. Giuliani, his personal lawyer, and a small handful of White House advisers.

But another group of advisers have been more candid with Mr. Trump. Late Thursday and on Friday afternoon, a handful of aides told the president that they’re willing to keep fighting the legal battles, but that it is an uphill climb without a likely positive outcome, according to people familiar with the discussions, who spoke on the condition of anonymity because they weren’t authorized to discuss private conversations. Mr. Trump, one adviser said, heard what they were saying, but is not yet ready to accept it.

On Capitol Hill, some Republican leaders resisted coming to terms with the likelihood of a Biden presidency, at least in their comments for public consumption. Representative Kevin McCarthy of California, the House minority leader, firmly aligned himself with Mr. Trump. He appeared on Fox News late Thursday night to insist that the president had “won this election” and again linked arms with the president on Friday. “Republicans will not back down from this battle,” he said.

But a handful of rank-and-file House G.O.P. lawmakers declined to rise to the president’s defense. “Baseless allegations undermine the public’s confidence in our electoral system, which is the foundation of our Republic,” said Representative Steve Stivers, an Ohioan who was chairman of the House Republican campaign committee two years ago when the midterm backlash against Mr. Trump cost the party its majority.

In private, some longtime House Republicans were even more caustic — dismayed, if not surprised, at the president’s handling of the election. Some said they were eager for him to concede, though Mr. Trump has told allies he has no plans to do so while states are still counting and the vote isn’t certified. What that means in the longer term is not clear.

Yet in a sign of the hold Mr. Trump retains on the party’s hard-line base, few Republicans in either chamber who are not retiring or regular critics of the president would confront him by name. In Kentucky, Senator Mitch McConnell, the majority leader, repeatedly evaded questions from reporters about the president’s inflammatory rhetoric, pointing to a statement he had made Friday morning that “every legal vote should be counted.”

There were, however, more indirect signs that Senate Republicans were moving on from the Trump years. Mr. Graham, an ally of the president’s who just won re-election in commanding fashion, said he was not assuming that Mr. Trump had lost but allowed that he was eager to work on immigration and infrastructure and that he also thought Mr. Biden deserved to have his cabinet confirmed.

House Speaker Nancy Pelosi called Mr. Biden the obvious winner in her weekly news conference, telling reporters that he would enter office with a “tremendous mandate” to govern and referring to him as president-elect, even though Mr. Biden himself has not yet declared victory.

While Democrats have set up an extensive legal operation to counter Mr. Trump in court, the Biden campaign struck a dismissive tone on Friday toward the president’s digging in and depicted him as a sore loser rather than as a menace to the democratic process.

Andrew Bates, a spokesman for Mr. Biden, suggested that if Mr. Trump declined to concede an election he had lost, then “the United States government is perfectly capable of escorting trespassers out of the White House.”