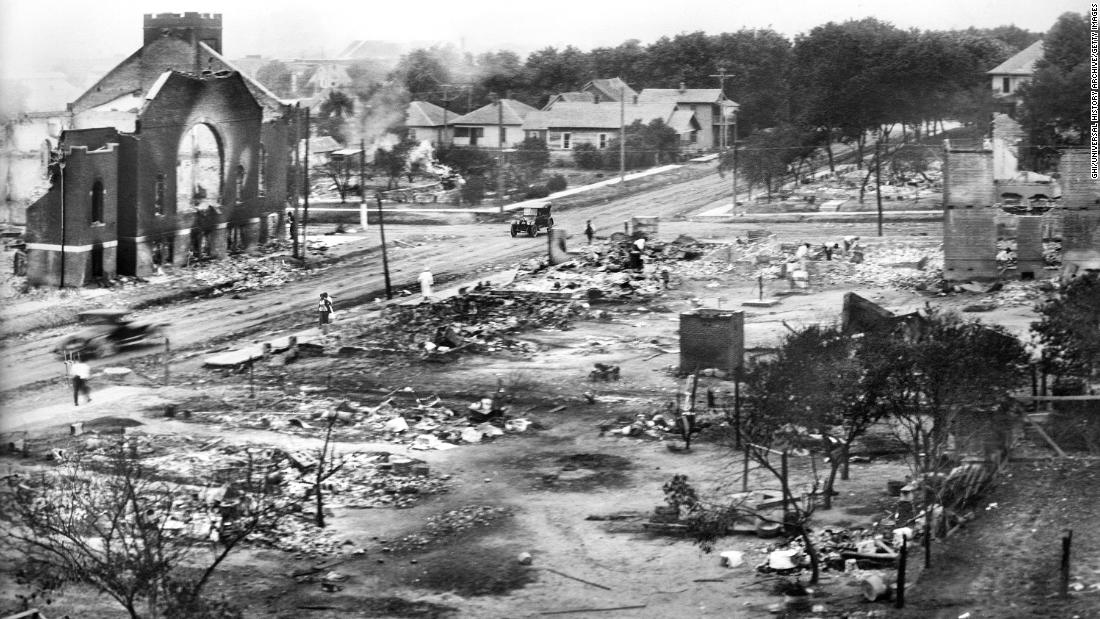 Lessie Benningfield “Mother” Randle, was a little girl when an angry white mob rampaged through the city’s Greenwood District, known as “Black Wall Street” because it was home to more than 300 black-owned businesses.

The lawsuit was filed Tuesday in Tulsa County District Court by Justice for Greenwood Advocates, a team of civil and human rights lawyers. The plaintiffs include Vernon A.M.E Church — the only black-owned building to survive the massacre — descendants of other victims and the Tulsa African Ancestral Society.

The lawsuit claims that the racial and economic disparities caused by the massacre created a public nuisance and an economic blight that remains. It says local government and agencies failed to help the neighborhood rebuild.

Among the defendants, the city of Tulsa, the Tulsa Regional Chamber and the Tulsa County Board of Commissioners said they would not comment on pending litigation. The Tulsa County sheriff, Tulsa Development Authority and Tulsa Metropolitan Area Planning Commission, also named in the suit, did not respond to requests for comment.

The state of Oklahoma used the public nuisance law to win a $572 million lawsuit against drugmaker Johnson & Johnson last year for its role in the state’s opioid crisis.

According to the lawsuit, the mob looted and destroyed Randle’s grandmother’s home, causing her “emotional and physical distress that continues to this day.”

“She experiences flashbacks of Black bodies that were stacked up on the street as her neighborhood was burning, causing her to constantly relive the terror of May 31 and June 1, 1921,” the lawsuit said.

Randle is one of the last living survivors of the massacre, which occurred after a 19-year-old Black man, Dick Rowland, was accused of assaulting a 17-year-old white girl named Sarah Page in the elevator of a Tulsa building. Charges against Rowland were later dismissed, according to the Tulsa Historical Society.

Attorney Damario Solomon Simmons told CNN that Randle is in poor health but was “upbeat and encouraged” when she heard about the lawsuit.

The Oklahoma National Guard, in a statement, defended its actions at the time.

“The historical record shows that a handful of Guardsmen protected the Tulsa armory and the weapons inside from more than 300 rioters. The actions of these Guardsmen substantially reduced the number of deaths in the Greenwood District. In the days following the riots, Oklahoma Guardsmen restored order to the area and prevented further attacks by both black and white Tulsans.”

The lawsuit says that Greenwood residents suffered $50 million to $100 million in property damage from the massacre and says that policies implemented in the following decades led to the decline of Greenwood and North Tulsa and increased inequality.

It does not ask for a specific dollar amount in reparations, but calls for victims to be compensated for their lost property and the money that should have gone to the community since 1921.

The lawsuit calls for the creation of a victim compensation fund, mental health and education programs for residents of Greenwood and North Tulsa and a college fund for descendants of massacre victims. It seeks construction of a hospital in the community and asks that Black residents from the Greenwood and North Tulsa communities to have priority consideration for city contracts.

“Ms. Randle has been hurting all these years by what happened in Tulsa. It’s been a huge burden on her and she believes it’s about time for the city to pay what’s owed,” Solomon-Simmons said. “Ms. Randle wants respect, restoration and repair from the City of Tulsa.”