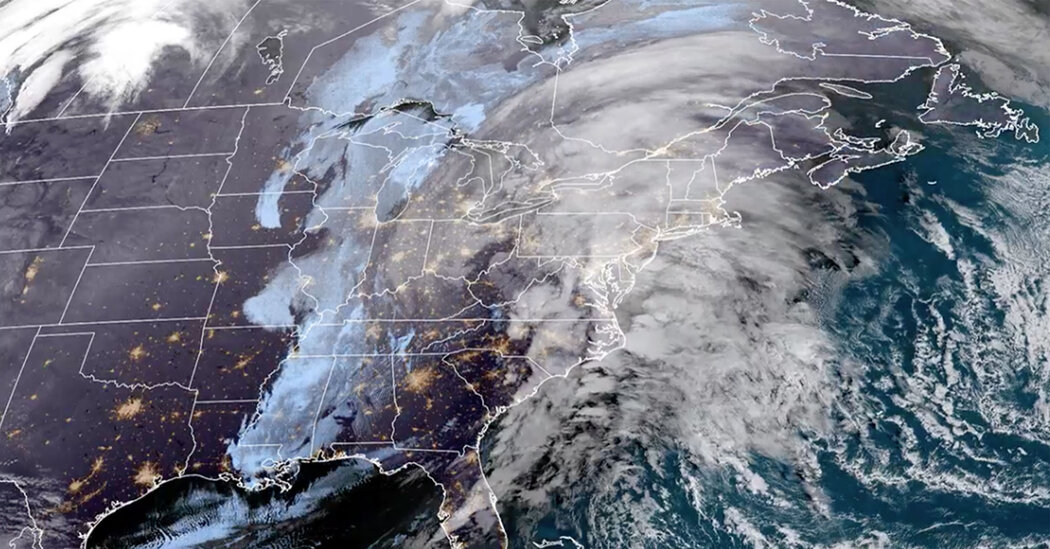 Heavy rains were possible across New England from Monday evening into Tuesday, and heavy snow was likely from the lower Great Lakes to the Ohio Valley on Monday night and Tuesday. Forecasters said the strong storm system that was bringing “widespread inclement weather” across the eastern United States would be slow to move on, bringing heavy rain and possibly thunderstorms to the region ahead of a cold front in Maine on Tuesday. About 30,000 customers were without power in Maine, where crews from Central Maine Power braced for outages caused by strong wind gusts starting Monday night and into Tuesday.

The snow was forecast to start falling on Tuesday in southwest Pennsylvania and northern West Virginia, with estimated accumulations of four to seven inches, according to the National Weather Service. In Moon Township, Pa., about 1.7 inches of snow had accumulated by 7 a.m., it said.

Winter storm warnings in those areas will remain in effect until 7 a.m. Wednesday.

Warnings were also issued for the same period for Garrett County, Md., where about five to 10 inches of snow was expected. The east Tennessee mountains could also see anywhere from two to eight inches through noon on Tuesday.

The steadiest snow is expected through Tuesday night, the weather service said.

Snow was expected to blanket portions of north central and northeast Ohio, where storm warnings were going into effect from 7 p.m. Monday to 10 a.m. Wednesday.

“Travel could be very difficult,” the National Weather Service said of the conditions in southwest Pennsylvania, northern West Virginia and Garrett County, Md. “The hazardous conditions could impact the morning or evening commute.”

Heavy snow was also forecast for south of Lake Erie in northeast Ohio and northwest Pennsylvania, where as much as nine inches of snow could fall.

“The snow is forecast to reach as far south as the higher elevations of the southern Appalachians under a cold and blustery northwesterly winds in the wake of the storm,’’ according to the Weather Service.

Georgia also had a winter storm advisory from 5 p.m. Monday through 7 a.m. Tuesday as snow showers were expected to drop about two inches across north and northeast portions of the state. “Plan on slippery road conditions,” the National Weather Service said.

Hazardous conditions in parts of north and central Georgia were expected to ease on Tuesday as snow tapered off after sunrise, forecasters said.

The storm is expected to strengthen and grow in size through Monday evening, producing blustery winds with heavy rains reaching New England.

Damaging wind gusts and tornadoes could accompany scattered thunderstorms from parts of Florida into the Carolinas and southern New Jersey through 6 p.m. Monday.

In the metropolitan New York region, the storm will bring heavy rain and high winds. “It’s a low pressure system that has been coming up the East Coast,” said James Tomasini, a meteorologist with the National Weather Service office in Upton, N.Y., which oversees the Hudson Valley, New York City, Long Island and northeast New Jersey. “The biggest thing with this system is the heavy rain and the winds.’’

He said wind advisories were issued on Monday morning for Long Island, Brooklyn and Queens and also for southern Connecticut. Peak sustained winds were estimated to be between 25 to 30 miles per hour, with gusts between 45 to 55 m.p.h.

“Pretty much the whole area is going to be seeing heavy rain,” he said.

The storm was already causing scattered power failures. About 600 Public Service Enterprise Group customers in New Jersey were without power on Monday afternoon, said Rebecca Mazzarella, a spokeswoman for the company.