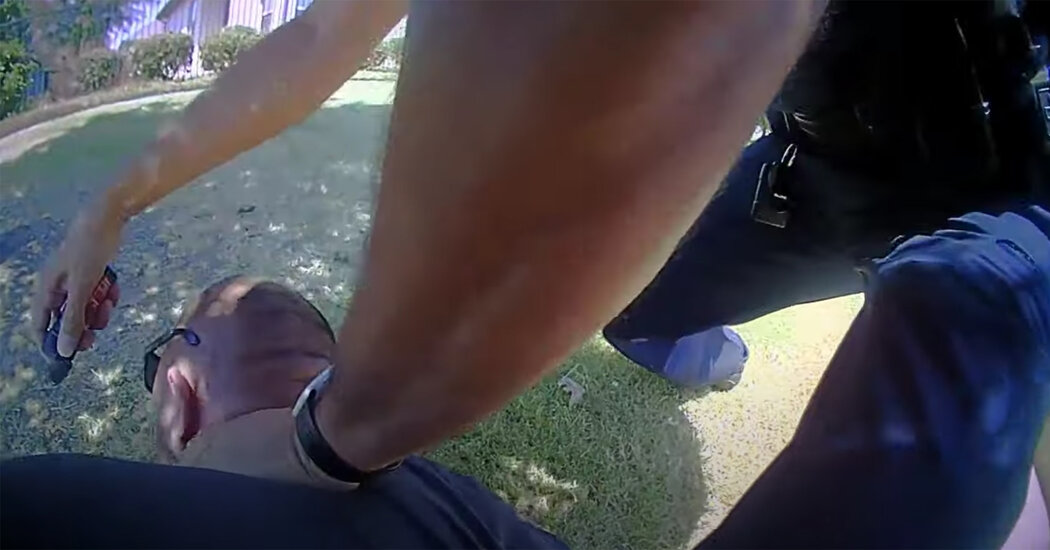 Marco and Dillon Puente, a father and son, say that living in the city of Keller, Texas, often means looking over their shoulder.

As Hispanic men in Keller, which is about 30 miles northwest of Dallas and whose population is 87 percent white, Marco Puente said that for him and his son, there’s a sense that “every time you see a cop, it’s: Is this cop going to pull us over? Are they going to target us? Do they know who we are?”

“It’s just this weird feeling that when you’ve done nothing wrong but you don’t want somebody else to be mad,” he said.

That uneasy vigilance came into play on Aug. 15, he said.

That day, as Mr. Puente and his son headed in separate cars to meet at a relative’s house, Mr. Puente, 39, saw his son, Dillon, being pulled over by the police.

Mr. Puente was recording video with his cellphone when he caught the attention of an officer, and according to a lawsuit filed this month in federal court, he was pepper-sprayed and handcuffed.

The lawsuit says two members of the Keller Police Department — Blake Shimanek, who at the time was a sergeant, and Officer Ankit Tomer — violated Mr. Puente’s civil rights. Lawyers representing Mr. Puente accuse them of using excessive force, among other claims.

“It’s undeniable that their conduct was horrible,” Scott Palmer, one of the lawyers representing Mr. Puente, said, referring to the officers. “They’re supposed to preserve and protect, and they caused havoc and mayhem.”

A lawyer representing Officers Shimanek and Tomer did not respond to requests for comment on Saturday.

Dillon Puente, 22, was on his way to his great-grandfather’s when he was pulled over by Officer Shimanek for making an improper wide right turn, according to the lawsuit.

Footage from Officer Shimanek’s body camera shows that Dillon Puente was asked to step out of the car and was then handcuffed.

As his son was being questioned, Marco Puente pulled up on the other side of the road and started to record the interaction on his phone from his truck, footage shows. Officer Shimanek yelled at him for obstructing the roadway and threatened him with arrest.

Mr. Puente repeatedly asked for a towel, but Officer Shimanek replied that Mr. Puente would receive medical attention after being taken to jail. Body camera footage later showed Officer Shimanek wiping himself with a towel taken from the back of his patrol car after refusing one to Mr. Puente.

Mr. Puente was charged with resisting arrest and interference with public duties, his lawyers said. He was released the night he was arrested, and the charges were later dropped.

Dillon Puente, who was placed in a patrol car separate from the one his father was in, was also arrested and taken to jail on charges of making an improper wide right turn. He was later released after paying a fine, Marco Puente’s lawyers said.

The Keller Police Department started an internal investigation that included recommendations from the Police Chief’s Citizen Advisory Council, the mayor of Keller, Armin Mizani, said in a statement released on Wednesday.

Officer Shimanek faced two allegations of misconduct: arresting an individual for an offense that was not committed and making an illegal search, according to a complaint filed with the city.

On Sept. 8, the police chief, Brad Fortune, said evidence supported the allegation that Officer Shimanek had arrested Mr. Puente for an offense he did not commit. Officer Shimanek was demoted to officer from his previous rank of sergeant with the opportunity to reapply to the position after one year. Officer Tomer was not disciplined.

Capt. Chad Allen, a police spokesman, said Officer Tomer had “acted accordingly” under orders from Officer Shimanek, who was his supervisor at the time.

Kevin Lawrence, executive director of the Texas Municipal Police Association, which represents more than 30,000 police officers in Texas, said a lawyer with the association was monitoring the lawsuit against Officers Shimanek and Tomer. The group does not represent the Keller Police Department or have a lawyer involved in the litigation. Both officers are members of the association.

“This is one of those cases where I would say you may want to take a step back and not take the pleading at face value,” Mr. Lawrence said about the lawsuit.

Chief Fortune met with Marco Puente two days after his arrest, apologized and said the officers “were in the wrong, not Mr. Puente,” according to the lawsuit.

Mr. Puente said in an interview that he had accepted the chief’s apology as a nice gesture but that he believed more needed to be done to hold the police accountable.

“This is going on everywhere,” Mr. Puente said about police misconduct. “If people keep on brushing it under a rug, it’s going to keep happening.”