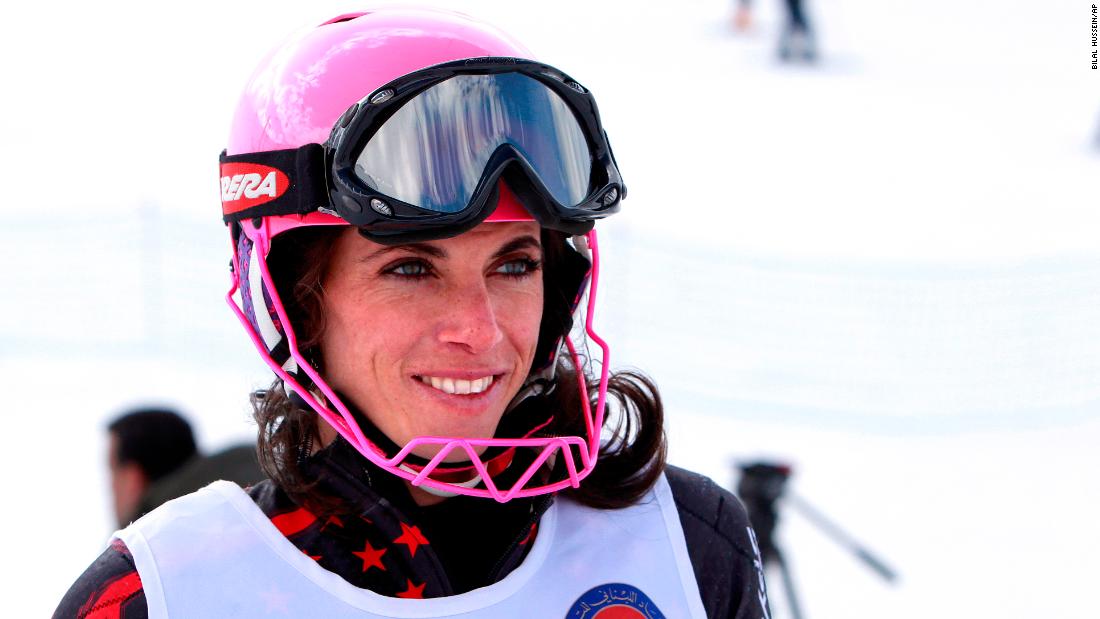 Within seconds, her mother was hanging up the phone as she tried to make sure the rest of their family was okay.

The August 4 explosion was unprecedented in magnitude, devastating the port of Beirut and Lebanon’s strategic grain reserve. Over 180 people were killed, more than 6500 injured and 300,000 people were left homeless.

Njeim competed in three winter Olympics as an alpine skier before switching to the marathon for the Rio 2016 summer games and needs a strong time from her next marathon to qualify for Tokyo 2021.

She lives and trains in Chicago, but watching the impact of the blast unfold on television she was racked with guilt for not being in Lebanon.

“This one really hit a lot of Lebanese, abroad and in Lebanon. I kept watching on TV and feeling very helpless.”

“It was a disaster. The hospitals were an absolute mess, people were walking in. Looking at photos from here and it was just heartbreaking. I know that they [the government] are not prepared for this and this is not the first time this happened.

“It has hit people really deep, that I think we are ready for a change. I don’t think that people are going to give up unless we see a change in the government.”

Days after the blast, the government of Prime Minister Hassan Diab, a self-styled technocrat, stepped down. In his resignation speech, Diab chastised Lebanon’s political elite, accusing them of hindering economic and political reforms.

At the end of August, Lebanon’s leaders designated the country’s ambassador to Germany, Mustapha Adib, as the new premier, hours before the arrival of French President Emmanuel Macron in Beirut.

Adib, who has been Beirut’s Berlin envoy since 2013, is affiliated with a small Sunni party headed by former Prime Minister Najib Mikati. He received the endorsement of most parliamentary blocs, including Iran-backed Hezbollah and the Saudi-backed party of former Prime Minister Saad Hariri.

“There is no time for talk, promises and wishes. It is a time for action,” Adib said, in a short acceptance speech from the presidential palace where President Michel Aoun tasked him with forming the country’s next government.
READ: Disruptors plan Hollywood ending for LA women’s soccer club

Njeim says that although she’s not sure what’s right and what’s wrong, she believes that the government needs a complete overhaul, saying that new beginnings would bring hope to the Lebanese people.

“We need a fresh start. The people make Lebanon, and right now they are the ones rebuilding the country. They are the ones helping each other. Our government is not doing anything about that.

“And I think if that’s the case, then we really need someone to give us hope. Someone to lift us up, someone to make us feel like we’re going to rebuild this and we will together work through this.

“Because right now it’s just the people helping people, and that’s what really makes Lebanon such an awesome place.”

While the country waits to see what the next move for the new government will be, Njeim explained that although the people will always remain resilient, she says the devastation from the explosion will never truly heal.

“We can rebuild Lebanon, that’s not a question. I believe in the people, I believe we can get back on our feet. But the life that was taken away, all the innocent people that died because of it. It’s just heartbreaking.

“It’s something that we will never forget as Lebanese, so hopefully we can pass through it and move forward.”

With the coronavirus pandemic shutting down most elite marathons for the year, Njeim must wait for her chance to qualify for Tokyo.

If she does qualify, she says her fifth Olympic games would be momentous.

“It’s representing my country and it means a lot to me. With everything that’s happening in Lebanon, it just gives me even more desire to represent Lebanon. It’s such a beautiful country. So, to me, racing for Lebanon is something that will never change.”

The runner wants to use the next Olympic games to tell the world about her country and its people.

“More than ever, I feel like I am proud to be Lebanese because we are people that will stand up, we’ll move forward. No matter how hard we get hit, we will stand up.

“I am more than excited to hopefully, if the Olympics happen, represent Lebanon. And this one will be very special because I want people to hear about Lebanon.

“I want them to know that it’s not a place where every time you think of Lebanon, you think of war or terrorism, it’s a beautiful place. We have everything there; lands, people, food, and it’s such a great place. I really hope that I can represent Lebanon that way.”

For the next Olympic Games, Njeim says Lebanon has decided to only take one athlete from the country in athletics, meaning she will need to give it her all to make the team.

For her, to get one more chance to represent Lebanon would mean everything.

“I really think this one will be a special one just because it will be my fifth one. And with everything happening, I have this burn to be there. To me, it’s not about being at an Olympics, it’s about representing Lebanon and telling people about this beautiful country.

“I will not be winning the marathon, but I will be there representing Lebanon and to me that is winning.”