Mask Rules Expand Across U.S. as Clashes Over the Mandates Intensify 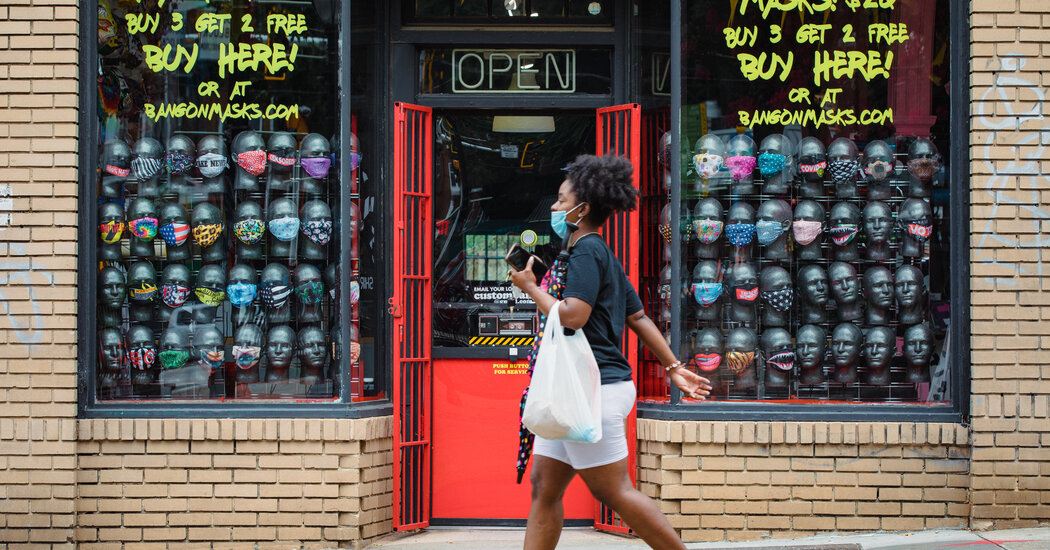 As images of people wearing surgical masks flashed across the screen, Morgan Freeman’s deep, soothing voice delivered a message to America: “When you wear a mask, you have my respect. Because your mask doesn’t protect you, it protects me.”

Using familiar actors, stirring background music and the arresting eyes of people peering out above their masks, a broad national ad campaign unveiled on Thursday by New York State, once the center of the coronavirus pandemic, aimed to educate people about how covering their mouths and noses could save lives.

That it was needed at all — six months since the virus was first detected in the United States — speaks to the lingering fight about the use of masks. At local government meetings and in the checkout lines of big-box stores, Americans continue to wrestle over one of the simplest methods that health officials recommend for stopping the spread of the virus.

A tidal wave of new mask requirements has been issued in the last few days, amid surging cases in many regions, including more than 74,000 new coronavirus cases across the country on Thursday, the most in a single day. Face coverings will be required at stores like Walmart, Target and CVS, and in a growing number of Republican-led states where governors once resisted such mandates.

More than half the states have issued statewide mask requirements, including Arkansas, where Gov. Asa Hutchinson, a Republican, announced a face covering requirement on Thursday, after previously taking a more hands-off approach. Gov. Jared Polis of Colorado, a Democrat, also issued a mask order on Thursday, after questioning whether such a mandate would be enforceable.

But there remains firm resistance in many circles, including from some Republican leaders who view mask requirements as a threat to personal liberty.

Gov. Brian Kemp of Georgia, who announced this week that he was suspending all local mask mandates, filed a lawsuit on Thursday challenging the authority of leaders in Atlanta to require masks inside their city’s limits. As the mayor of Atlanta, the suit said, Keisha Lance Bottoms “does not have the legal authority to modify, change or ignore Governor Kemp’s orders,” only to carry them out.

And in Oklahoma, Gov. Kevin Stitt said this week that he remained opposed to a mask order, even after he became the first governor known to test positive for the virus. “You can’t pick and choose what freedoms you are going to give people,” Mr. Stitt said during the Zoom call on which he announced his positive test.

Masks have been broadly accepted in many European and Asian countries. Britain and France issued nationwide mask orders for certain public places this week, joining a long list of nations that already required them.

But in the United States, there was initially confusion and shifting guidance over masks. The issue became politicized when, even as the Centers for Disease Control and Prevention began urging Americans to wear face coverings, President Trump stressed that the measure was voluntary, and said that he did not think he was “going to be doing it.” Mr. Trump publicly wore a mask for the first time on Saturday.

Early in the pandemic, federal officials instructed Americans not to buy or wear masks. The guidance came in part because of an early, limited understanding of the virus and because of shortages in medical-grade masks, which were needed for essential workers.

In April, the C.D.C. revised that guidance, advising that cloth face coverings were recommended.

Public health officials increasingly see masks as a powerful weapon against the virus, particularly after the World Health Organization acknowledged that the virus can be airborne, with tiny respiratory droplets able to linger in the air for hours. Masks can block dangerous respiratory droplets that would otherwise be spread by infected people, and universal mask wearing can help stop inadvertent transmission by people who are asymptomatic.

In an example cited by the C.D.C. this week, vigilant mask wearing was credited with preventing two ill stylists at a hair salon in Missouri from spreading the virus to nearly 140 clients, none of whom became ill. Dr. Robert R. Redfield, the director of the C.D.C., said in an interview with the Journal of the American Medical Association on Tuesday that if all Americans embraced rigorous mask wearing, the country could control the virus within one to two months.

The vast majority of Americans support wearing masks, polling suggests. According to a Gallup survey conducted online from June 29 to July 5, 72 percent of adults surveyed said they always or very often wore a mask when outside their homes, while 18 percent said they wore a mask rarely or never.

But in some conservative areas, wearing a face covering is also seen as a political and cultural symbol, and mask requirements have been considered a serious infringement.

“It’s absolutely not acceptable in a free world,” said Ammon Bundy, who once led an armed takeover of an Oregon wildlife refuge and was protesting a mask ordinance in Idaho on Thursday.

Idaho has faced a sharp rise in cases and warnings from hospital leaders about the trajectory in the state, and a local health board scheduled a meeting to discuss masks. But a heated discussion emerged on Thursday between protesters and local health officials. A young girl began crying, police officers arrived to calm the situation, and the board canceled the meeting.

In Provo, Utah, dozens of people packed a county commissioners meeting where officials were scheduled to discuss whether students should wear masks when they return to school in the fall. That meeting on Wednesday was postponed shortly after it started — many people in the audience had shown up without masks.

Some in the audience booed the chairman of the commission when he pointed out that the crowd was not following public health guidelines.

“This is the exact opposite of what we need to be doing,” the county chairman, Tanner Ainge, a Republican, said, his mask looped around his ears but lowered to his chin. “We are supposed to be physically distancing, wearing masks.”

Clashing views on masks have grown especially pronounced in parts of the Deep South. The Republican governors of neighboring states, Alabama and Georgia, issued markedly different orders on Wednesday despite facing urgent outbreaks.

Gov. Kay Ivey of Alabama issued a statewide mask order, drawing blowback from some in the ranks of the Republican-held State Legislature, even as Mr. Kemp suspended all local mask mandates, a move that affected at least a dozen cities and drew pledges of defiance from some officials.

“It’s like a rebellion,” said Russell Edwards, a Democrat and the mayor pro tem of Athens-Clarke County, Ga., where Mr. Kemp is from.

Before Mr. Kemp’s suit was filed, Mayor Bottoms of Atlanta, a Democrat who has tested positive for the virus, seemed to anticipate the governor’s challenge of her authority to maintain a mask order. “I am not afraid of the city being sued,” she said, “and I will put our policies up against anyone’s, any day of the week.”

In New York, where the virus hit early and hard, there is fear that opposition to masks in other parts of the country could lead to a resurgence in the state. Gov. Andrew M. Cuomo, a Democrat, on Thursday unveiled the national ad campaign to promote mask wearing with eight 30-second television spots featuring stars such as Robert De Niro and Jamie Foxx.

The campaign comes as New York — which managed to slow an outbreak that has resulted in more than 30,000 deaths — is trying to prevent the virus from seeping back into the state. Travelers from 22 states where cases are rising are supposed to quarantine for 14 days upon arrival in New York.

Republican governors in states with surging cases are increasingly facing pressures from all sides. After Gov. Greg Abbott of Texas reversed his position on face masks and issued a statewide order, Republican groups in a handful of counties passed resolutions censuring him. While the resolutions are symbolic, they are among the strongest ways local leaders can voice their disapproval.

Mr. Abbott defended his mask order on Thursday as necessary to prevent another stay-at-home order. “I know that many of you all are frustrated — so am I. I know that many of you do not like the mask requirement — I don’t either,” he said in a video message at the virtual state Republican convention. “The last thing that any of us want is to lock Texas back down again. We must do all that we can to prevent that.”

In Oklahoma, Governor Stitt has enjoyed support from fellow Republicans for his approach to face masks. He has not issued a statewide order and routinely makes public appearances without a mask — at meetings at the State Capitol, at Mr. Trump’s rally in Tulsa last month and, recently, at a Walmart in Oklahoma City.

Mr. Stitt’s support from allies appeared unchanged after he tested positive for the virus.

“It hasn’t changed his view on it — it doesn’t change my view on it,” State Senator Nathan Dahm, who is a Republican from the Tulsa suburb of Broken Arrow and who remains opposed to a statewide mandate. “He understands the risk of wearing a mask or not wearing a mask. That was his choice. We wish him a speedy recovery.”

The state’s urban centers, though, are moving toward requiring masks. The Tulsa City Council passed a mask ordinance on Wednesday, deciding in a 7-2 vote to require people to wear a face covering in a business, school or public place, and the City Council in Oklahoma City was set to vote on a similar citywide indoor mask ordinance on Friday.

Mr. Dahm said he also opposed the local ordinances. While he said he carried a mask with him, and would wear it if required to do so to enter a business or if someone he was talking with asked him to wear it, “my default is to not wear a mask.”

Karen Keith, a Democrat and a commissioner in Tulsa County, said she considered herself “the queen of wearing a mask.”

Nevertheless, she is now among the growing number of Oklahomans who have contracted the virus, which she said she believed she picked up while on a road trip through Texas, at a convenience store where few people were masked.

“Good Lord, people, you have to wear a seatbelt. You have to have a driver’s license. You can’t drive while you’re drunk,” she said. “There are all sorts of rules and regulations that you have to follow every single day. This is not some infringement on anybody’s rights.”