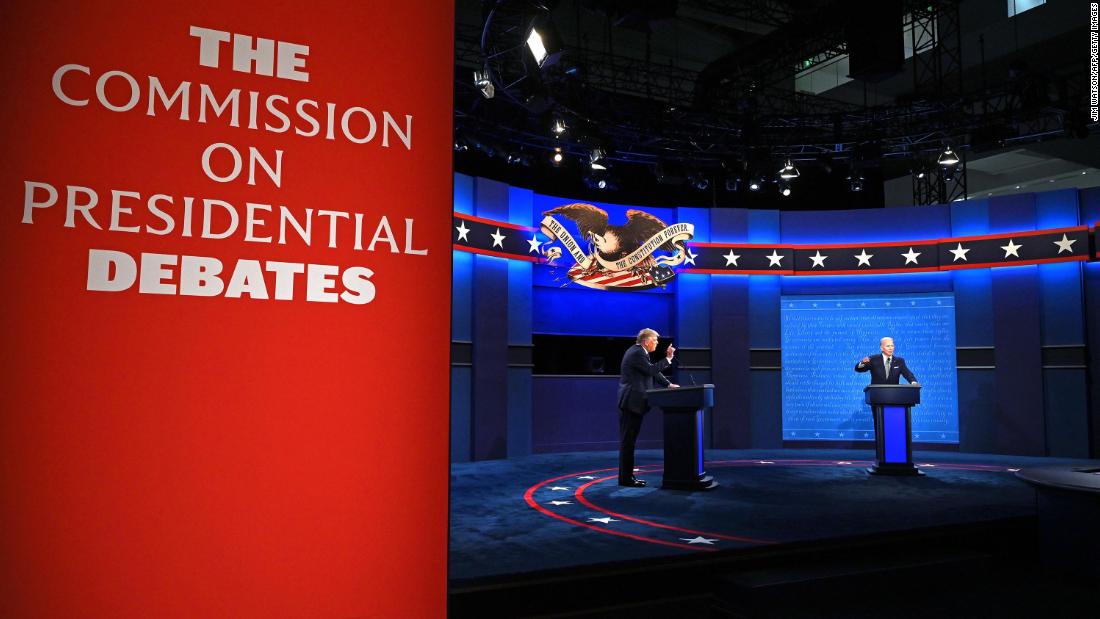 Trump has repeatedly attacked debate moderators and the commission, falsely claiming during an interview on “Fox & Friends” on Tuesday that his matchup with former Vice President Joe Biden this week is “so set up,” even though the debate topics and moderator were agreed to by both campaigns weeks ago.
“The president’s apparent strategy is to challenge the validity of the election should he lose,” John Danforth, a Republican and former US senator from Missouri who has been on the commission since 1994, wrote in a Washington Post op-ed Tuesday. “We saw this strategy initially in his claims that mail-in ballots are the tools for massive election fraud. Now we see it as well in his assertion that the debates have been rigged by the commission to favor former Vice President Joe Biden.”

Danforth noted that like other members of the commission he has maintained a “strict vow of silence” regarding personal feelings about the campaign, but now that the President and his supporters “have attacked the commission’s integrity, I feel compelled to respond.”

But, Danforth wrote, “the conclusion that any commission member would eschew fair play to push a partisan position is, to put it mildly, ironic.”

“The same people who decline to extend the presumption of fairness to members of the commission rightly assert that Amy Coney Barrett will put aside her personal beliefs on the Supreme Court,” he wrote. “But more importantly, the attack is just wrong.”

After an intense back-and-forth with both campaigns, the commission canceled the October 15 debate after Trump tested positive for coronavirus and refused to do a virtual format. The Trump campaign criticized the move, blaming the commission for lack of communication and not negotiating another debate date. Both campaigns instead held dueling in-person town halls. Danforth wrote that Trump’s charge that the commission opted for a remote-town hall debate to favor Biden was “nonsense.”

“(Speaking again for myself, had I wanted to help the Biden campaign, the last thing on my mind would have been to restrain the technique President Trump exhibited in the first debate),” Danforth wrote.

He added that although it is fair to question an organization’s decisions and that the commission “is not above criticism,” there is “an enormous difference between criticizing good-faith efforts and accusing the commission of corrupt favoritism.”

“The first is helpful for improving our work. The second destroys public confidence in the most basic treasure of democracy, the conduct of fair elections,” he wrote. “The second paves the way to violence in the streets.”

View 2020 presidential election polling
The commission announced Monday that both Trump and Biden will have their microphones muted during portions of second presidential debate that will take place on October 22. Debate commission co-chair Frank Fahrenkopf told CNN’s Wolf Blitzer Tuesday that muting non-speaking candidate’s microphones is a “necessary” after the interruptions during the first presidential debate in Cleveland last month.
“There’s no question that the first debate was a disappointment for everybody, I think particularly for the American people,” Fahrenkopf said during an interview on “The Situation Room.” “We, as a commission, knew we couldn’t change rules without the consent of both (campaigns), but saying to the candidates that what’s going to happen is when the moderator asks candidate number one to begin their two minutes to talk uninterrupted, the candidate’s mic will not be live. When those two minutes are up, it is then candidate B’s chance to talk.”