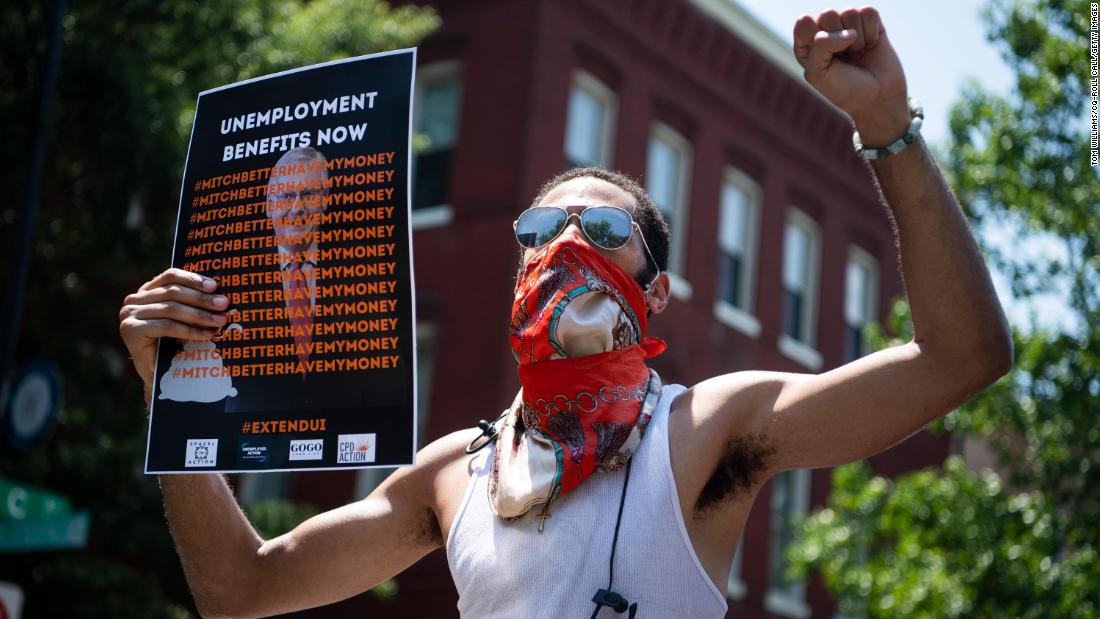 Senate Republicans remain divided over how much help to provide, delaying the release of their next economic relief proposal — though Republican Sen. John Thune of South Dakota said this past week that the pressure of missing a deadline on the expiration of benefits may force a deal.

Treasury Secretary Steven Mnuchin said Thursday that extending the program, which was part of the $2 trillion economic aid package passed in March, is a priority.

“We’re not going to pay people more money to stay at home than work, but we want to make sure that the people out there that can’t find jobs do get a reasonable wage replacement,” he told CNBC. “So it will be based on approximately 70% wage replacement.”

That would equate to about $200 a week, said Ernie Tedeschi, an economist at Evercore ISI.

Whatever happens on Capitol Hill, the unemployed will continue to receive state benefits, but those vary widely and replace only 40% of wages, on average.

Americans are suffering despite the extra cash

Even with the federal boost, many Americans are suffering financially, and its lapse comes days before August rent or mortgage payments are due. Eviction protections included in earlier congressional packages have also lapsed, raising the prospect of homelessness or dislocation for millions.

Losing the weekly $600 benefit would cause an estimated 41% to spend more than half their income on rent, leaving them at greater risk of evictions, according to an analysis released Thursday by Zillow.

More than a quarter of adults said they missed these payments last month or who have slight or no confidence that their household can pay next month’s rent or mortgage on time, according to a recent Census Bureau survey.

And nearly 11% of adults are in households where there was either sometimes or often not enough to eat in the last seven days, the survey found.

“No one wins and everyone loses if we allow supplemental UI benefits to expire with no replacement,” said Andrew Stettner, senior fellow at The Century Foundation, who estimates 25 million Americans are receiving the federal payments. “Families will be evicted from their homes, poverty will soar, children will go hungry, businesses will shutter and the economy will tank.”

Colton Blount of Dallas is worried about how he’ll pay his bills on just $520 a week in state benefits. A human resources consultant with a global firm, Blount, 29, was furloughed in mid-June. While he has savings that can carry him for a few weeks, he’s already reached out to his landlord and credit card companies to see how flexible they can be. But he’s hoping lawmakers act before he has to start prioritizing payments.

“Ending a program because they assume a few people are making a little extra while it’s keeping the rest of us afloat is ridiculous and shows how out of touch several are in the Congress,” he said.

When Congress approved the enhanced payments in March, lawmakers thought the economy would bounce back quickly.

Related: These 12 charts show the economic recovery is on pause
The number of Americans filing for first-time unemployment benefits rose last week for the first time in four months. More than 1.4 million people submitted initial applications, up 109,000 from the prior week.

And 975,000 people filed first-time claims for the pandemic unemployment assistance program, which Congress created in late March to temporarily help freelancers, independent contractors and others who don’t qualify for the traditional unemployment program. That’s up nearly 20,000 from the prior week.

The Census surveys also show that since mid-June, more adults are reporting that they had not been employed in the previous seven days. The figure rose by 6.5 million over the past month.

“The labor market remains in a precarious place as Covid-19 cases surge in some parts of the country and stricter measures are adopted in response,” said Nancy Vanden Houten, lead US economist for Oxford Economics.