More people watched Biden on ABC than Trump on NBC, MSNBC and CNBC 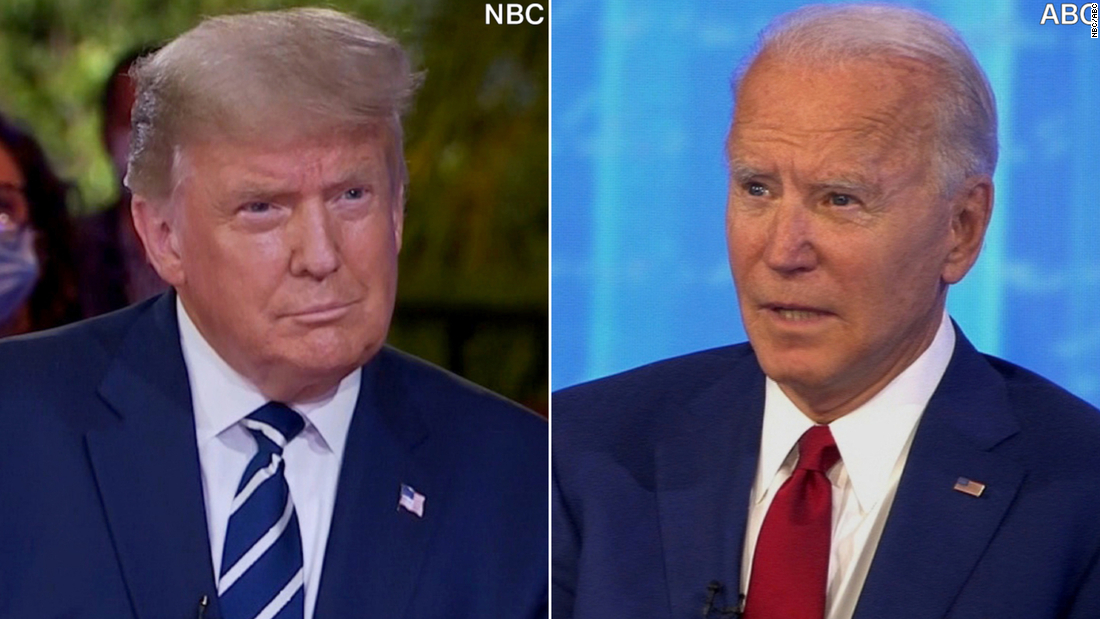 That alone was a result virtually no one in the TV business expected. And that’s not even the most surprising part.

The Trump town hall was simulcast by two of NBC’s cable channels, MSNBC and CNBC, but even when those channels are included in the total, Biden — on only one network — still prevailed.

The Trump town hall averaged 10.9 million viewers on the NBC broadcast network. On MSNBC, Trump reached 1.8 million viewers, and on CNBC, about 720,000 viewers. So Trump’s gross audience across the three channels was 13.5 million, still fewer than Biden’s audience on ABC alone.

The final totals were provided by Nielsen on Friday evening. Earlier, preliminary data showed slightly smaller audiences for both the NBC and ABC telecasts.

Staffers at ABC News privately admitted to their surprise about the ratings victory. And Biden allies wondered if Trump would react angrily.

In the run-up to Thursday night, the Trump campaign embraced the popular ratings narrative and predicted that Trump would outrate Biden. Trump campaign senior adviser Jason Miller said “we’re gonna have a much bigger audience than Joe.”

After Thursday night’s Nielsen data showed the opposite, Biden campaign national press secretary TJ Ducklo tweeted, “Turns out more people last night were interested in watching a leader with a clear plan to get this pandemic under control and Americans back to work, than the same combative, chaotic liar whose incompetence got us into this mess — regardless of how many channels he was on.”

The Nielsen ratings only measure viewership on TV sets at home and away from home. Both town halls were also live-streamed to phones, computers and other devices, and both ABC and NBC self-reported robust online viewership.

But there is no industry standard to measure all the various ways the town halls were streamed. In any event, that would be like trying to combine apples and oranges. In the apples to apples match-up between the two candidates, Biden had the better night.

Trump has been a Nielsen connoisseur for decades. While hosting “The Apprentice” on NBC, he paid close attention to the performance of his show and routinely exaggerated its success. He has continued to fixate on TV ratings during his years in the White House and has frequently congratulated Fox News for its ratings victories.

But when the TV ratings have disappointed him, he has also shifted to other metrics; when Biden had a bigger TV audience for his convention, Trump complained that “Online Streaming Numbers” weren’t being counted in the totals.

After the Nielsen ratings for the town halls came out Friday, Miller retweeted a Trump fan who tried to combine TV and YouTube data to portray Trump as the true victor. But that’s apples and oranges again, since a minute or two of on-demand YouTube viewership is not comparable to 60 minutes of TV viewership.

The Biden event actually stretched for two hours, including post-town hall coverage, while the Trump event was one hour long. ABC said the event was the network’s “most-watched primetime telecast” since the Oscars back in February.

The Biden town hall was also scheduled first — on the same day that Trump backed out of a scheduled presidential debate. Trump objected to the “virtual” format that was imposed by the debate commission as a consequence of his coronavirus infection. So Biden’s campaign agreed to a town hall in Philadelphia on ABC instead, following in the footsteps of Trump, who was on ABC on September 15.

The Trump campaign sought a debate replacement of its own, and struck an agreement with NBC for a town hall in Miami, just like the one Biden did with NBC on October 5.

NBC’s decision to schedule Trump head-to-head against Biden, in the same 8 p.m. Eastern time slot, provoked a big backlash, including within the company.
Some of the heat on NBC subsided, however, when moderator Savannah Guthrie pressed Trump for answers and pushed back on some of his misstatements.

While Trump was the runner up in the ratings race, it is still notable that he reached an audience of 13 million viewers on TV, because he usually reaches a much narrower audience during his calls to Fox News and other aligned media outlets.

His hour with Guthrie and a group of Florida voters was a rare chance for him to speak well beyond his base.

However, the debate that was supposed to take place on Thursday night would have been much more widely seen. The first, and so far only, debate of this fall was watched by more than 73 million Americans.

While surprising to many media and political observers, Biden’s ratings strength has been palpable for months.