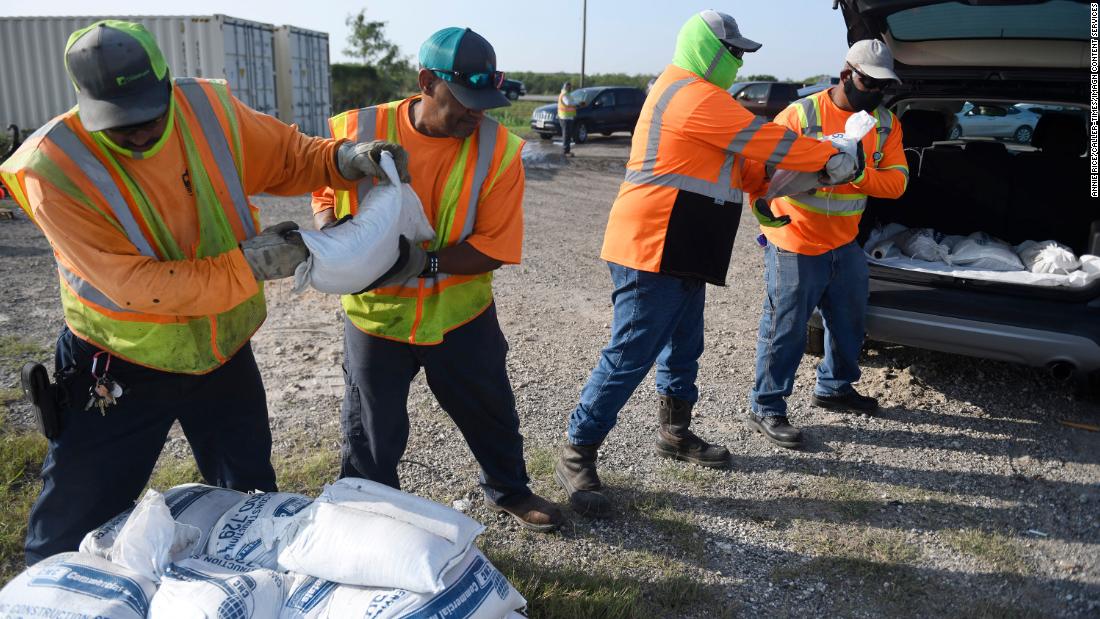 Official landfall is forecast to be very late Monday or early Tuesday, but Texans should prepare for tropical storm conditions late Sunday through early Monday.

A storm surge warning is also in effect from Port Aransas, Texas, to the Rockefeller Wildlife Refuge in Louisiana, where 2 to 4 feet of storm surge is possible.

“Persons located within these areas should take all necessary actions to protect life and property from rising water and the potential for other dangerous conditions,” according to the National Hurricane Center.

Flooding could occur with little warning

Louisiana Gov. John Bel Edwards urged residents to get ready for the storm.

“Prepare for heavy rainfall and the threat of storm surge and flooding in certain regions of the state due to Tropical Storm Beta,” Edwards said in a series of tweets Sunday.

The Texas State Operations Center has been activated to Level II, or Escalated Response Conditions, and Gov. Greg Abbott warned residents to heed the advice of local officials.

Texas officials warn that rainfall, flash flooding and isolated tornadoes could occur with little to no warning.

“We will continue to closely monitor the storm and work collaboratively with officials to ensure our fellow Texans are safe,” Abbott said.

A total of 8 to 12 inches of widespread rain is forecast, and isolated rainfall of up to 20 inches is possible from the middle of the Texas coast to southern Louisiana through Thursday.

It isn’t expected to be life-threatening, though, Henry said, just “terribly inconvenient.”

Voluntary evacuations have been issued for several parts of the county, including residents west of the Galveston Seawall and Jamaica Beach, “which has already experienced some pretty significant flooding,” Henry said.

Houston Mayor Sylvester Turner said the city would be watching the storm system “very carefully,” and what happens Monday would determine what officials recommend residents do, although that could change overnight.

“Whether or not we’ll ask people to stay home, whether or not the testing centers will close, that will be based on what we see and what we’re told tomorrow,” Turner said.

“But for right now, we’re going to proceed to a, let’s say, a normal workday schedule tomorrow,” he added. “But again, things could happen overnight and could change that assessment.”

The hurricane watch previously posted is discontinued, but Beta is chugging along at a dangerously sluggish 6 mph to the west-northwest, having slowed Saturday morning from 12 mph.

The storm has sustained winds of 60 mph, about 120 miles south-southeast of Galveston, and the hurricane center’s reconnaissance aircraft found no change in strength.

But at such a slow pace, the storm is still dangerous.

By comparison, an average human walks around 3 or 4 mph. Hurricane Sally made landfall at 3 mph. Florence made landfall at 6 mph and Harvey at 7, but both storms slowed very quickly after landfall and triggered tremendous flooding.

Beta is battling a good amount of shear and dry air in the Gulf of Mexico which is keeping the intensity of the storm from increasing.

Having a “high shear” environment prevents a storm from intensifying. A “low shear” atmosphere environment is favorable for the tropical system to develop further and intensify.

The shear is also making the storm very asymmetric, and the bulk of the rain and strongest winds are located to the north and northeast of the center.

Beta is named after the second letter in the Greek alphabet.

Alpha was named Friday, and a few hours later, Tropical Storm Beta was named in the Gulf of Mexico.

The NHC ran out of names for the 2020 Atlantic Hurricane season and began drawing from the Greek alphabet for only the second time in recorded history.

The other time was in 2005, when the season produced so many storms it exhausted the season’s list of 21 names.

The Atlantic hurricane season officially runs from June 1 through November 30. With two months remaining, 2020 could easily surpass the record set in 2005.

The season has produced almost twice the average number of storms with 23 named so far. The average hurricane season produces 12.