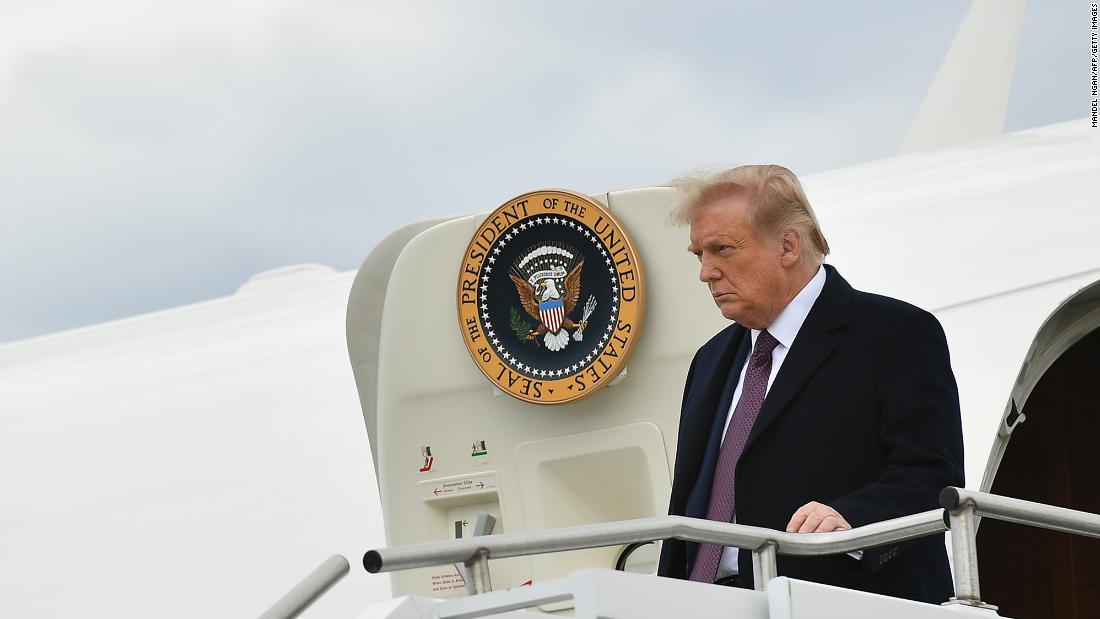 With Trump hospitalized at Walter Reed National Military Medical Center, 69% of Americans said they trusted little of what they heard from the White House about the President’s health, with only 12% saying they trusted almost all of it.

Disapproval of the President’s handling of the coronavirus outbreak stands at a new high in the survey, with 60% saying they disapprove. Additionally, 63% say his own infection is unlikely to change anything about the way that he handles the pandemic.

Questions about Trump’s coronavirus diagnosis were added to a survey already in progress on Friday.

Overall, Trump’s approval rating in the poll stands at 40% approve to 57% disapprove. Disapproval is up from 53% in early September.

About a third (32%) say they are concerned about the government’s ability to operate while Trump is ill, with concern higher among Democrats (48% very or somewhat concerned) than independents (30%) or Republicans (15%). Most, 62%, say Vice President Mike Pence is qualified to handle the presidency should that become necessary, while 35% think he is not. Those views are also sharply divided by party. While 93% of Republicans consider Pence qualified to handle the presidency, only 38% of Democrats agree.

The view that Trump acted irresponsibly regarding the risk of coronavirus to others around him cuts across most demographic lines, and is particularly strong among several groups whose support could be critical to Trump’s re-election bid. Among women, 72% say Trump acted irresponsibly. That stands at 66% among those 65 and older as well as among independents, and 65% among Whites with college degrees. The President’s supporters (79%) and Republicans (76%) are about the only groups among which a majority say Trump acted responsibly.

Distrust of information from the White House about the President’s health also crosses most demographic lines, and again Republicans (65%) and Trump voters (66%) are some of the only groups where a majority say they trust most of what they hear about Trump’s health.

There is agreement across party lines, though, that Trump’s diagnosis will not change the way he handles the pandemic. Most Democrats (70%), independents (59%) and Republicans (62%) agree on that.

Most Americans interviewed after Trump’s diagnosis said the remaining scheduled debates should be held: 59% said yes, 36% said no, with Democrats more inclined to say they should not (49%) than independents (39%) or Republicans (17%).

Americans are evenly split over whether the worst of the coronavirus outbreak is behind us (48%) or yet to come (47%). In early September, opinions on this question tilted toward being through the worst (51% behind us, 43% yet to come), but infection counts have been on the rise in many states in recent days.

Democrats continue to be more likely to say that the worst is ahead (69%) than are independents (48%) or Republicans (20%), but the shift since September comes mostly among Republicans. In last month’s poll, just 11% of Republicans said the worst was ahead, while Democrats (69%) and independents (47%) were about the same as now.

Beyond their split on the trajectory of the country’s coronavirus outbreak, Americans are far from united on their comfort level in returning to regular routines, on the state of the economy and on their willingness to get a coronavirus vaccine if one were available. Partisanship is at the core of each of those divides.

And perhaps most concerning, division over whether to get a coronavirus vaccine if one were available at low cost has increased. Overall, 51% say they would try to get vaccinated, the smallest share in CNN polling since May. While most Americans say they are confident that the ongoing vaccine trials are properly balancing safety and speed (61%), the poll suggests a shifting partisan divide over whether to get vaccinated as Trump touts a fast-moving process for approval.

The CNN Poll was conducted by SSRS October 1 through 4 among a random national sample of 1,205 adults reached on landlines or cellphones by a live interviewer. Results for the full sample have a margin of sampling error of plus or minus 3.3 percentage points. For questions added on October 2, it is plus or minus 4.2 percentage points.