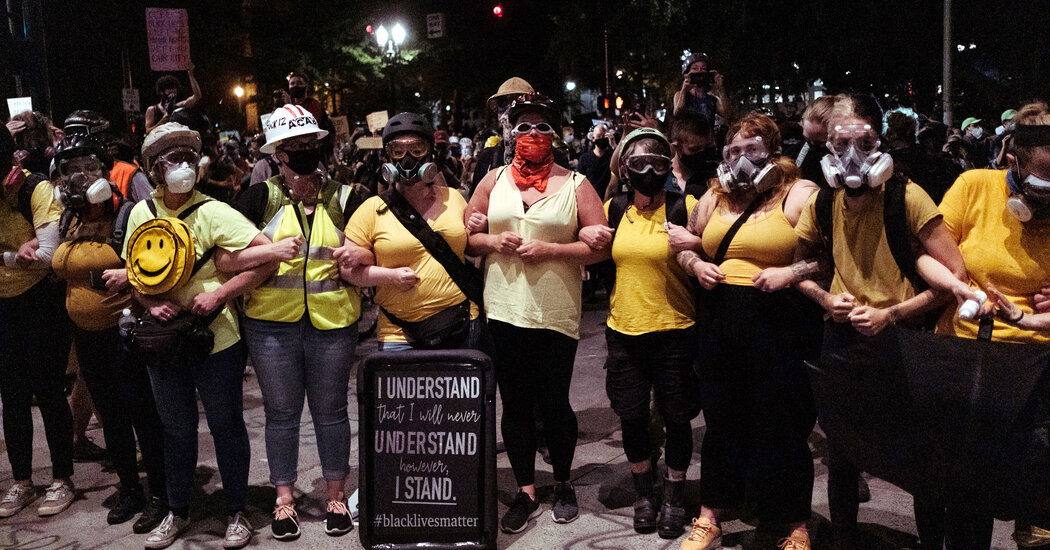 Wearing matching shades of white or yellow, the women of the “Wall of Moms” in Portland, Ore., have become instant icons of the city’s protests, though the mothers nightly gatherings only began last Saturday and the city’s protests have been going on for more than a month.

They join a long line of mothers’ protests against state violence and what they view as authoritarianism around the world, including in South Africa, Sri Lanka, Argentina and Armenia, which have shown that mothers can be particularly effective advocates for a cause — but also that there is a catch.

History suggests that mothers’ power is most potent when they are able to wield their own respectability, and the protections it brings, as a political cudgel. But that is easiest for women who are already privileged: married, affluent, and members of the dominant racial or ethnic group.

Mothers who are less privileged often struggle to claim that power, even though they are often the ones who most urgently need it.

Theresa Raiford, a Black mother who is the executive director of Don’t Shoot Portland, a local group that works to end police violence, helped to organize and direct the Wall of Moms’ early actions, but noted that the positive response to the mostly white mothers has been proof of the very racism they are protesting.

Mothers had been participating in the protests for five weeks, but “nobody recognized them until they literally put on white so they could be highlighted as white,” she said.

“What it does show us is that Black lives don’t matter here, white moms do,” she said. “And those moms know that, too. That’s why they’re standing in solidarity with us.”

‘Mothers are symbolic to the nation’

Bev Barnum — who posted the original Facebook message asking moms to come and protest, and serves as the group’s informal leader and organizer — said she had asked women to color-coordinate their outfits in order to stand out in the crowd, but otherwise told them to dress “like they were going to Target.”

“I wanted us to look like moms,” Ms. Barnum said in an interview. “Because who wants to shoot a mom? No one.”

Ms. Barnum said she identified as Mexican-American, not white, but other members say the group is mostly white.

Mothers’ protests are often powerful precisely because the gender roles that ordinarily silence and sideline women, allowing them to be seen as nonthreatening, turn into armor for political activism, experts say.

During Armenia’s 2018 “velvet revolution,” a largely nonviolent uprising that eventually toppled the country’s leader, Serzh Sargsyan, mothers took to the streets pushing their children in strollers, indelibly tying their maternal identities to their political demands.

In Armenia, “mothers are symbolic to the nation and, to some extent, have immunity in protests,” Ulrike Ziemer, a sociologist at the University of Winchester in Britain, wrote in a 2019 book chapter about the uprising. “If police would have touched mothers with their children in prams during the protests, that would have brought shame on them individually, but also on the state apparatus they represent.”

In the Armenian protests, mothers from all walks of life were able to claim those protections, Dr. Ziemer said in an interview. But in societies that are divided along racial or ethnic lines, mothers from marginalized groups cannot access that full political power so easily.

In South Africa, the Black Sash, a group of white women who opposed the apartheid regime, were able to use their gender and race as a shield for their political activity that others could not.

“The Government has let Black Sash survive while closing down other anti-apartheid groups in part because white South African society has perched its women on pedestals,” The Times reported in 1988. “The police find it awkward to pack the paddy wagons with well-bred troublemakers who look like their mothers or sisters.”

The government had no such compunction about locking up Black women. Albertina Sisulu, a pioneering Black anti-apartheid activist who was also a married mother of five, was arrested and held in solitary confinement multiple times. Countless other Black women suffered even worse fates.

In Sri Lanka, women from the Tamil minority group have been protesting for years to demand information about sons and daughters who were kidnapped by state forces during the country’s civil war and never heard from again. Their activism has drawn international attention and some limited engagement from the country’s government.

But when the women’s demands went beyond their own individual grief and engaged with politics more broadly, national politicians and civil society groups dismissed them as pawns of male activists, said Dharsha Jegatheeswaran, co-director of the Adayaalam Centre for Policy Research, a Sri Lanka-based think tank. As members of a marginalized minority group, she said, motherhood could take them only so far.

In the United States, there is a long tradition of Black women claiming their identities as mothers when protesting against police shootings, lynchings, and mass incarceration. But, like the Tamil activists in Sri Lanka, they have tended to be viewed through the narrow lens of their own grief and fear for their children. White women have typically been taken far more seriously by white audiences as representing mothers generally — another case of bias on display.

Ann Gregory, a lawyer and mother of two who joined the wall of moms in Portland on Sunday, said they had hoped to serve as a buffer between other demonstrators and law enforcement.

“We realize that we’re a bunch of white women, and we do have privilege,” she said. “We were hoping to use that to protect the protesters.”

Instead, the women got a crash course in the grievances that had set off the protests in the first place.

Ms. Barnum, new to such activism, said she was surprised when other demonstrators warned her group that they could be in danger.

“The news said that if you give the police officer a reason to fear for their life, a reasonable fear, they could hurt you,” she said. “But if you didn’t give them a reason then they wouldn’t hurt you.”

The moms, she reasoned, would be peaceful and give the officers no cause for alarm, so had no reason to worry.

That may seem an unusual belief for someone attending a protest against police violence, but it illustrates the privilege taken for granted by many people who have not had run-ins with law enforcement.

So on her first night at the protests, when federal officers fired tear gas and flash-bang grenades at the group of moms, “I couldn’t believe what was happening,” she said. “We weren’t being violent. We weren’t screaming expletives at them.”

The power wielded by police has long been justified with the claim that officers must be able to use force when necessary to protect themselves or the public, and that people who have done nothing wrong have nothing to fear. Black activists and their allies have been contesting that claim for years, but the tide of public opinion has been slow to turn against law enforcement.

However, when officers fire tear gas and projectiles at soccer moms holding sunflowers, as happened in Portland on Sunday night, even more observers — who may not previously have thought they could be at risk — see that as a fate that might befall anyone. And history suggests that could have profound political consequences.

In Argentina in the late 1970s and early 1980s, the Mothers of the Plaza de Mayo, women whose children had been “disappeared” by the military government — seized, tortured and murdered in secret — were the most visible opposition to the regime, with their distinctive white kerchiefs.

They “continually pointed out that the majority of the disappeared were not terrorists, as the junta claimed, but loyal members of the opposition, including people who had never engaged in politics and even some members of the establishment,” the political scientist Marguerite Guzman Bouvard wrote in “Revolutionizing Motherhood,” her 2002 book on the group.

“In shattering the lies that served as a rationale for the junta’s terror,” Dr. Bouvard wrote, “the Mothers exposed the glaring weakness of the entire system.”

There are obvious differences between the Argentine dictatorship of and the United States today. But Ms. Gregory, the Portland mother who joined Sunday’s demonstration, was deeply disturbed by the federal officers’ violent response to the protest.

“We weren’t any danger to them,” she said. “We were just standing there with flowers. We’re a bunch of middle-aged moms.”

Ms. Raiford, the longtime activist, is cautiously hopeful about the power of that message — and its messengers.

“Sometimes when people hear activists say ‘Black lives matter,’ they say ‘well that has nothing to do with me.’” she said. “But when we talk about the intrinsic value of humanity, and how all of our lives intersect because we have children, we have families, we live in communities, we have loved ones, I think that that creates less of a barrier.”

She hopes the attention on the moms will help to spread that message. “We don’t need silent victims,” she said. “We need loud witnesses.”