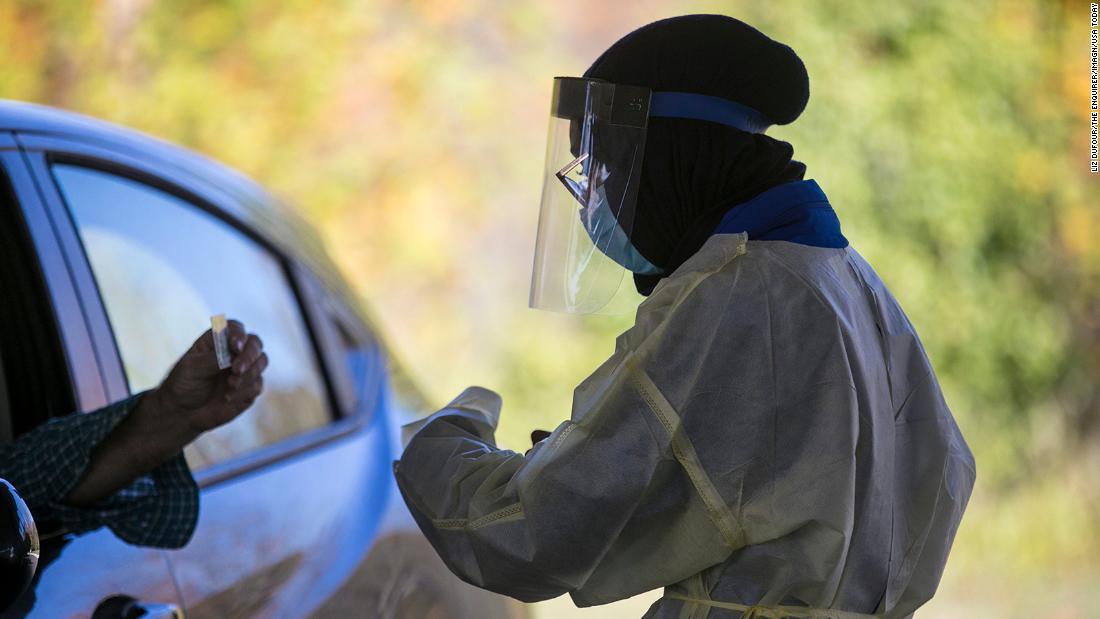 Dr. Scott Gottlieb, former commissioner of the US Food and Drug Administration, said on CNBC’s “Squawk Box” on Monday that the US was at a tipping point where aggressive action could stem the worst of the pandemic.

“But we’re not going to do that and I understand why. There’s a lot of fatigue set in and a lot of policy resistance to taking strong action ahead of, you know, the spread,” he said.

“I think we’re right now at the cusp of what’s going to be exponential spread in parts of the country.”

At 69,967 new cases per day, the 7-day average of new cases is at the highest levels since the pandemic began, bringing the national death toll to 225,720, according to data from Johns Hopkins.

And state numbers are worrisome too: 37 states are reporting at least 10% more new cases in the past week compared to the previous week, and 21 states saw their highest 7-day averages on Sunday.

In all, 29 states have reported at least one record high day of new cases during the month of October, according to Johns Hopkins University data.

Whether these states are seeing a new wave of cases or just an exacerbation of the original wave is just semantics, according to Dr. Anthony Fauci, the director of the National Institute of Allergy and Infectious Diseases.

“No matter how you look at it, it’s not good news,” Fauci said.

Officials in states and cities alike are responding to the bad news by rolling back reopening plans.

“Everywhere you look, it is screaming out that this is surging right now folks, and we have all got to band together and turn these numbers down, particularly hospitalizations and loss of life,” Murphy said.

Newark, which is in the counties with the top five case counts, will begin implementing restrictions including closing non-essential businesses by 8 p.m. starting Tuesday, according to a press release.

“This is not the first time COVID-19 has threatened our city and its residents at this magnitude and once again, we will meet this challenge with determination and guided by data,” said Newark Mayor Ras Baraka in the statement.

In Massachusetts, 13 communities are rolling back their reopening plans as well after the state reported more than 1,000 new cases for three days in a row.

The communities are going back to step one of Phase 3 of the state’s plan, which closes many indoor recreation businesses, reduces occupancy in establishments like gyms and museums to 40%, restricts outdoor gatherings at event venues to 50 people and reduces outdoor performances to 25% capacity.

In Idaho, even though Gov. Brad Little said the economy will remain open, the state moved back from Stage 4 of the reopening plan to Stage 3.

“It doesn’t mean in-person church will end. It doesn’t mean we’re restricting travel in or out of the state,” he added. “It especially doesn’t mean that we should go to for remote learning in our schools.”

Yet other states have resisted taking more serious restrictions or requiring people to wear masks, which are proven to limit the spread of the virus.

“Over the last 24 hours as we were here and we were in your grocery stores and in your restaurants, and frankly even in your hotels, this is the least use of masks that we have we seen in retail establishments of any place we have been,” Birx told local reporters, according to the Bismarck Tribune. “And we find that deeply unfortunate because you don’t know who’s infected and you don’t know if you’re infected yourself.”

There is not currently a mask mandate in North Dakota — one of 15 states without such policy.

As coronavirus cases rise across the nation, the impact on children has grown.

Over the past two weeks, the amount of cases among children has increased by 14%, The American Academy of Pediatrics said Monday.

The group, which represents pediatricians, says about 792,188 children have been infected in the US as of October 22. And the AAP said 94,555 new cases among children 17 and under were reported from October 8 to October 22.

To stay safe and prevent infection, children may not be able to celebrate Halloween the way they are used to this year, the US Centers for Disease Control and Prevention said

“There are lots of ways to celebrate the spooky season that are safer than traditional activities,” Dr. Michael St. Louis of CDC’s Community Guidance Team said on a call with community leaders.

Options include virtual costume parties, scavenger hunts for candy, small outdoor and distanced gatherings and one-way trick or treating, where candy is placed at the end of the driveway for children to collect, he said.

People may have to find creative ways to incorporate face masks into their costume this year, St. Louis noted.

“It’s important to understand that a costume mask is not a substitute for a cloth face mask, unless it has two or more layers of breathable fabric and fits snugly around the nose, mouth and under the chin,” he said.

A coronavirus vaccine may not be widely available until next year, so people are going to have to wear masks for quite a while longer, Fauci and two top staffers argued Monday.

They spoke out in defense of cloth masks — recently attacked by Sen. Rand Paul — and said taking tests regularly is not enough to excuse people from wearing a mask.

Masks are useful for blocking large particles coming from people’s mouth and nose, but the researchers said that recent reports show that aerosols from singing, shouting or heavy breathing can linger and travel farther.

“Light-scattering experiments indicate that 1 minute of loud speaking potentially can generate more than 1,000 virion-containing aerosols that may linger in the air in a closed, stagnant environment,” they said. “Therefore, the commonly observed practice of individuals removing their mask when speaking is not advisable.”

And with winter coming, people will have to wear masks even more, they said.