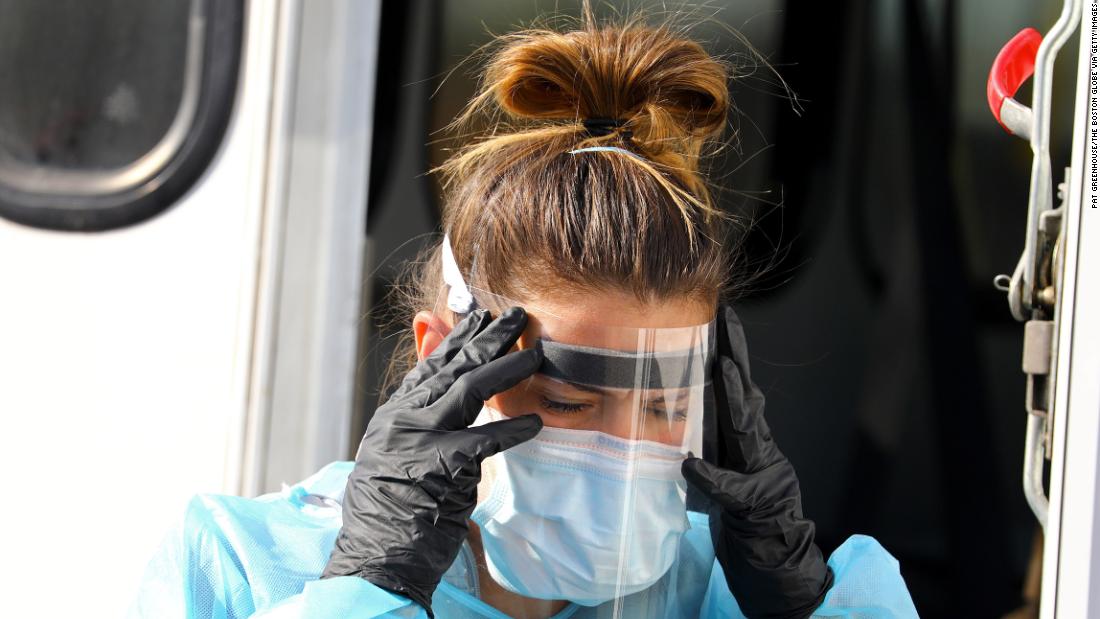 The daily case count on Friday hit 75,056, according to data from Johns Hopkins University. That’s the second-highest number of cases reported in a single day since the pandemic began. The highest day for new infections was on July 16 with 77,362 cases.

Friday’s case tally continues the trend from Thursday when the US reported more than 70,000 new infections. Thirty-two states have been reporting rising Covid-19 infections, according to data from Johns Hopkins.

Adams cautioned that hospitalizations are starting to go up in 75% of the jurisdictions across the country and officials are concerned that in a few weeks, deaths will also start to increase.

The good news, Adams said, is that the mortality rate in the country has decreased by about 85% thanks to multiple factors, including the use of remdesivir, steroids and better management of Covid-19 patients.

More than 41,000 people were hospitalized across the country, according to the Covid Tracking Project. This is the highest level of nationwide hospitalizations since Aug 20.

The number of people hospitalized has increased by 33% since the beginning of October, the CTP says.

Deaths are also creeping upward, with 856 on Thursday, Johns Hopkins says. The 7-day average of deaths continues to climb and is up to 763. That is the highest level of average weekly deaths in a month.

In White House coronavirus task force reports obtained by CNN this week, officials say there are “early signs of deterioration in the Sun Belt and continued deterioration in the Midwest and across the Northern States.” And more state leaders have sounded the alarm on increasing infections, hospitalizations and deaths.

A vaccine trial resumes after being halted

Drug manufacturer AstraZeneca announced Friday it will resume the trial of its experimental coronavirus vaccine in the US.

The company said the US Food and Drug Administration has given approval to continue the trial after reviewing all of the global safety data and concluding it was safe to resume.

The trial was paused last month after a volunteer in clinical trials in Britain developed a neurological condition.

“This is going to be the most scrutinized vaccine ever produced,” Adams said Friday referring to a potential Covid-19 vaccine.

While President Donald Trump said Thursday that he is hopeful that a vaccine will be approved before the end of the year, the director of the National Institutes for Health remains “cautiously optimistic.”

NIH Director Dr. Francis Collins said Friday that “it might not happen and it might take longer.”

“FDA is not going to approve a vaccine that has less than 50% effectiveness,” Collins said Friday during a National Press Club virtual event.

But even if it’s approved, it’s unclear whether Americans will take it. Collins said he’s troubled to see that the percentage of people willing to take the vaccine appears to be failing.

“I’ve been talking so optimistically about how we are likely to have a vaccine by the end of the year, but if only 50% of Americans are interested in taking it, we’re never going to get to that point of immunity across the population where Covid-19 goes away. It could be here for years,” Collins said.

Only 51% of Americans said they would try to get a Covid-19 vaccine once one is widely available at a low cost, according to a CNN poll conducted by SSRS earlier this month.

Just one state is headed in the right direction

Oregon is the only state whose Covid-19 statistics are trending in the right direction, according to Johns Hopkins data, which also show:

In North Carolina, more than 100 cases have been linked to a church convocation even in Charlotte, health officials said Friday.

At least three deaths and a cluster of 12 cases at a senior living community have been linked to the events earlier this month at the United House of Prayer for All People, Mecklenburg County officials said.

In Nashville, Tennessee, hospitals are reporting a 40% increase in patients. Hospital officials say a major surge of new Covid-19 cases could threaten their ability to serve patients with many diagnoses requiring hospitalization.

Social gatherings in Colorado will be limited to 10 people from no more than two households after a surge in coronavirus cases, health officials announced Friday.

The decision was based on case data showing that attending social gatherings and community exposures has become more common among new cases since July.

“We are asking all Coloradans to act with an abundance of caution to reverse these worrying trends,” Colorado Department of Health and Environment Executive Director Jill Hunsaker Ryan said in a statement. “We need to keep gatherings smaller and with people from fewer households — we are asking everyone to ‘shrink their bubble’ to reduce the spread.”

Experts fear the holidays might raise infections. Doctors worry that college students returning home could bring the virus, with large family gatherings for Thanksgiving and other events adding to the spread. Infectious disease experts say virtual celebrations might be best this year.

“This is being driven by individual behaviors at this point,” he told CNN’s Jim Sciutto. “We’ve got to keep focused on washing our hands, watching our distance and wearing our face coverings when we can’t watch our distance, and in particular being careful in household gatherings.”

The University of Washington’s Institute for Health Metrics and Evaluation says the “fall/winter surge has begun” — just a couple weeks behind Europe — and will intensify in November and December before reaching a peak in January.

“Many states will face enormous pressure on hospital capacity and will likely have to re-impose some social distancing mandates,” IHME said. “The best strategy to delay re-imposition of mandates and the associated economic hardship is to expand mask use.”

The IHME said in another study Friday that if 95% of Americans wore masks in public, more than 100,000 lives could be saved through February.

The study notes that about 49% of US residents report that they “always” wear a mask in public.

At that rate and with states continuing to remove social distancing mandates, the US death toll could reach about 1 million by February 28, according to the study.