Obama in Florida: Trump’s tough guy schtick is a fraud 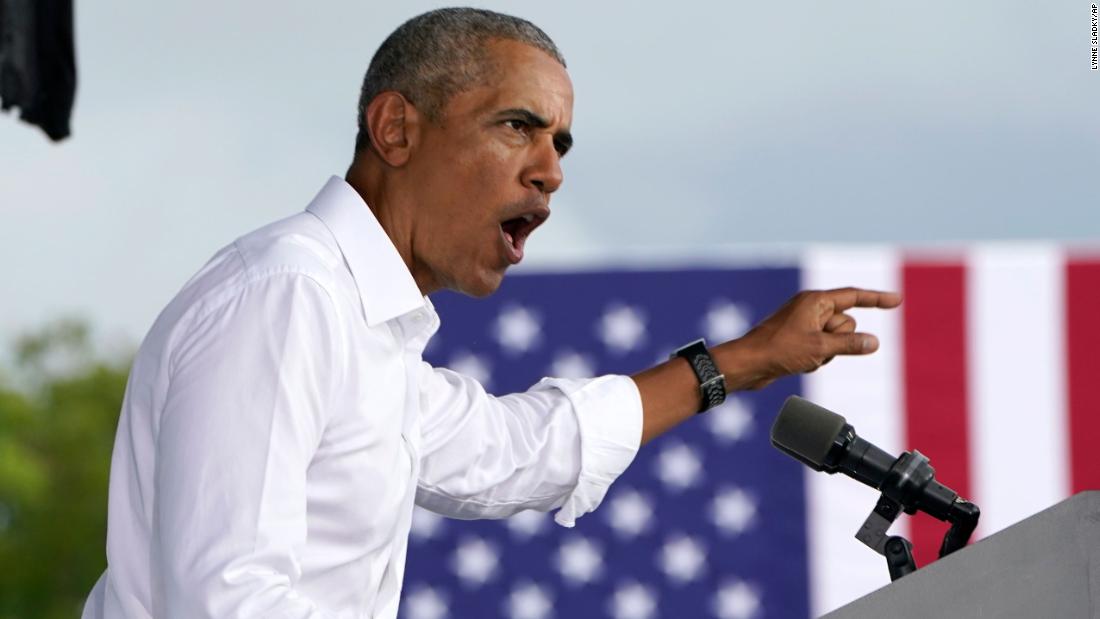 “He likes to act tough and talk tough. He thinks scowling and being mean is tough,” Obama said at a drive-in rally in South Florida. “But when ‘60 Minutes‘ and Lesley Stahl are too tough for you, you ain’t all that tough.”
The decision to appear in Florida, where the polls indicate the race will be decided by the finest of margins, with less than 10 days until Election Day underscored the state’s potentially decisive role in the election. It also suggested the Biden campaign believes that victory there would put a pin in the expected election night drama by cutting off Trump’s increasingly narrow path to reelection.

“If you bring Florida home, this thing’s over,” Obama told volunteers at an unannounced stop in Miami Springs earlier in the day. “That way I don’t have to stay up too late. I don’t have to wait for the results through the next day. I want to go to sleep knowing that we’re going to have a president fighting on our behalf.”

Trump was in Ohio on Saturday, but he had Obama on his mind. During remarks in Circleville, he brought up the former president’s return to the stump.

“I guess it started yesterday or the day before, right? They had 42 people show up, 42,” Trump said. “We have thousands, tens of thousands and outside it’s five times what this is.”

Obama, like Biden, is not holding typical campaign rallies in deference to the coronavirus pandemic, which has claimed the lives of more than 224,000 Americans and, on Friday, recorded the highest single day of new cases since the pandemic began earlier this year. Trump has ignored public health officials warning and pleas in order to host larger events, which are not socially distanced and feature only occasional mask-wearing.

In his remarks in Florida, Obama wove a detailed prosecution of Trump’s record in office with mockery of the President’s rough-and-ready persona, joking that anyone who gets rattled by a “60 Minutes” correspondent is “never going to stand up to a dictator.”

The former president, who has remained an obsession of Trump’s throughout his time in office, described the President’s behavior as “not normal” and compared him unfavorably to “Florida Man,” an internet meme that plays on news headlines about wild, unruly and often illegal behavior.

But Obama returned throughout his speech to the spiraling pandemic and Trump’s response — and his failure to chart out a coherent one that addresses the scale of the crisis.

“Eight months into this pandemic, new cases are breaking records. Donald Trump isn’t going to suddenly protect all of us. He can’t even take the basic steps to protect himself,” Obama said, returning to an argument he first made on Wednesday in reference to Trumps’ own bout with the illness. It is believed the President caught the virus during a White House ceremony, which Obama — like many others — called a “superspreader event,” for Supreme Court nominee Amy Coney Barrett earlier this month.

Obama also tied the surging toll of the pandemic to Trump’s efforts to dismantle his own signature achievement, the Affordable Care Act. If the 2010 health care law is struck down in the Supreme Court, where its fate could be decided after the election, popular provisions like protections for patients with pre-existing conditions would fall with it.

Trump has repeatedly claimed that he has a replacement ready to go, but has not yet — after years of promising — presented one to the public.

“The reason they don’t show you their plan to actually provide people protections when it comes to preexisting conditions is because they don’t have one, and they never have,” Obama said. “That’s just a fact. And instead of just ‘fessing up that they don’t want people to have health insurance, they’ve attacked the Affordable Care Act at every turn.”

In his spat with “60 Minutes,” Trump released unedited footage from the interview, a portion of which showed Stahl pressing him on the whereabouts of his long-promised health care plan. But Trump, unable to point to any specific legislation or blueprint, only reasserted his vague promises.

He was clear, though, on his desire for the Supreme Court to terminate the law.

“Why would you want to take people’s health insurance just at the very moment when people need health insurance the most?,” Obama said on Saturday, in reference to Trump’s comment. “What’s the rationale in that? And think about what that would do to families right here (in Miami-Dade).”

Obama concluded with another call for Americans to turnout in record numbers ahead of and on Election Day. He hailed the grassroots movements that fought back against the Trump administration’s family separation policy at the US-Mexico border and took to the streets this summer to demonstrate against racism and police brutality.

But, he said, failing to vote would amount to an abandonment of the principles those protesters lined up to protect.