Opinion: Why President Trump is targeting the 1619 Project 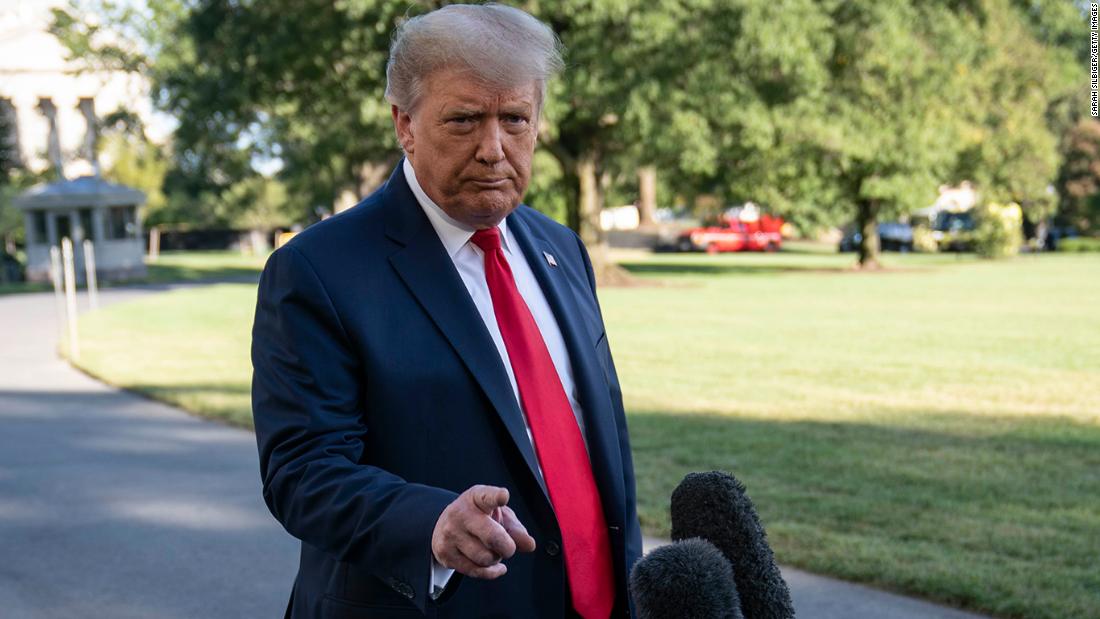 On Thursday, Trump attended the White House Conference on American History at the National Archives and railed against the left for everything from “defil(ing) the American story” to “attempting to destroy” Martin Luther King Jr.’s vision for every child to be judged by the content of their character, rather than their skin color.
“The left-wing rioting and mayhem are the direct result of decades of left-wing indoctrination in our schools. It’s gone on far too long,” he said.
He went on to announce the creation of the 1776 Commission “to promote patriotic education” in a direct response to the New York Times’ 1619 project — a Pulitzer Prize winning project that traces the history and legacy of slavery in the US.
In establishing the 1776 Commission, the President vowed to, “Encourage our educators to teach our children about the miracle of American History” and promised, “Our heroes will never be forgotten. Our youth will be taught to love America with all of their heart and all of their soul.”

The 1776 Commission is a bad idea in the hands of a hyper-partisan President. By folding our education into the culture wars that the President hopes will get him reelected, Trump will turn the research and pedagogy of academia into more fodder in the partisan wars of Washington.

This is yet another effort to exploit backlash politics in order to build a coalition that ignores the needs and experiences of millions of Americans who won’t vote for him (and even of some who did vote for him). Besides the politics, his campaign for a “patriotic history,” as he defines it, would undermine the quality of the education students will receive.

The President’s attacks focus on changes in the history profession since the 1960s. The Baby Boom Generation of historians challenged the notion that history textbooks should focus exclusively on presidents and legislators. That approach, they said, missed huge swaths of the lived experience of Americans. This generation of historians also took aim at a portrait of US history that depicted the country as forever moving in a positive direction and always correcting long-standing weaknesses.

Historians from the 1970s, 1980s, and 1990s integrated issues of racism, sexism, nativism, class conflict and more into our understanding of our country and broadened the canvas of actors who were considered important, including marginalized and disenfranchised peoples who struggled for their rights.

One of the classic works of this genre came from Columbia University’s Eric Foner, who produced a brilliant reframing of history in his 1988 book “Reconstruction: America’s Unfinished Revolution, 1863-1877,” which placed freed African Americans at the center of the story. Despite President Trump’s comments that “our heroes will never be forgotten,” Foner’s book is filled with exemplary Americans, just not the limited canon to which Trump refers.

Over the past two decades, Generation X and Millennial historians have also brought high politics back into the picture (I have been part of this cohort) by taking a fresh look at political and economic elites.

Instead of presenting presidents and legislators as isolated figures who embodied the nation, however, we portrayed them as politicians who governed in relationship to society, culture, and social movements. We explored how social divisions and cultural biases informed public policy and political leadership. And, yes, many very good historians found that the United States has not been as exceptional as older generations liked to think.

The nation was shaped by the same sorts of bitter and ongoing conflicts, as well as injustices, that were evident elsewhere around the globe. We often failed to correct our deeply-rooted problems.

The New York Times’ 1619 Project attempted to bring some of these approaches to their pieces about the effects of slavery in American history. Instead of beginning the story of the country with the Revolution against the British Empire, the project pushed the timeline back to 1619, the year enslaved Africans were brought to Jamestown in order to reveal how slavery and racial injustice have been an integral part of American history.

To be sure, there was a group of prominent historians, including my colleague Sean Wilentz and Brown University’s Gordon Wood, who criticized key parts of the publication and disagree on some of the narrative. For instance, they contend that the 1619 Project downplayed the impact of the anti-slavery movement on the founders and skewed the ideals that drove the revolution.

Nonetheless, even these critics agree that slavery and race relations belong at the center of our American history. As Wilentz and others said in their letter criticizing the 1619 Project, “We applaud all efforts to address the foundational centrality of slavery and racism to our history.”

There is nothing unpatriotic about a clear-eyed view of our nation’s past. Indeed, understanding the problems and failures at the center of our nation is to take our history seriously.

Of course, there will be serious disputes about the American history, such as which ideas guided the nation’s founders and over the different ways that racism has impacted contemporary American life.

But let the historians hash this out with our professional standards of archival evidence and historiographical argumentation. We have that covered.

Given how President Trump has treated so much of his responsibilities as president, we can assume that this commission will be another extension of his effort to maintain power at all costs, even when that comes at the health of our Republic and knowledge itself.

By trying to wipe away so many key parts of our past, he is playing a political game that uses historical knowledge as yet another weapon to maintain power. Given how much disinformation has been poured into the public commons since the start of his tenure, it’s urgent that Americans don’t let this drown out a serious debate about our nation’s past.