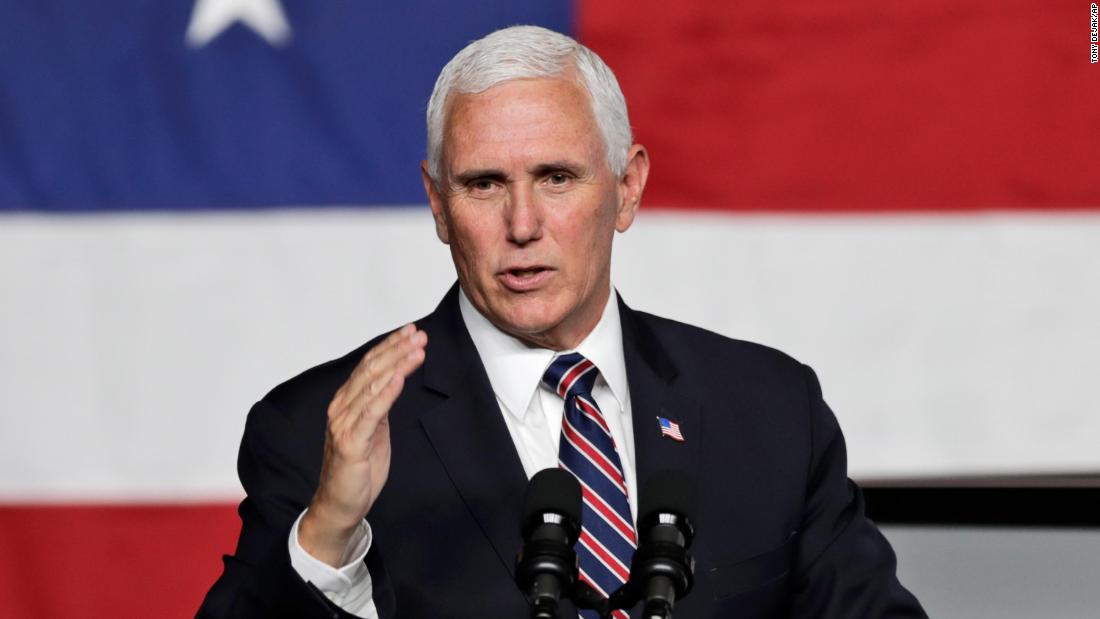 As those health experts — including Drs. Deborah Birx and Anthony Fauci — looked on, Pence characterized attending a rally as a personal decision the government could not impede.
“The freedom of speech, the right to peaceably assemble is enshrined in the Constitution of the United States,” Pence said when asked — during the first public briefing by the White House coronavirus task force in two months — why he and President Donald Trump moved forward with campaign events.

“We have an election coming up this fall,” Pence said. “And President Trump and I believe that, taking proper steps — we created screening at recent events — and giving people the very best counsel that we have, we still want to give people the freedom to participate in the political process. And we respect that.”

Pence’s answer illustrated the wide gap between what Trump’s administration is recommending amid a once-in-a-generation health crisis and what Trump himself is actually doing. As experts such as Fauci and Birx encouraged Americans to heed recommendations from the federal government on socially distancing and wearing masks, Pence sought to frame the debate as one of personal choices.

“I think it’s really important that we recognize how important freedom and personal responsibility are to this entire equation,” he said.

Yet Trump has shown little willingness to make those choices himself, either by refusing to wearing a mask in public or insisting on convening mass rallies where social distancing is impossible.

Trump himself did not attend Friday’s task force briefing, which occurred at the Washington headquarters of the Department of Health and Human Services rather than the White House briefing room.

Instead, in the middle of the briefing, Trump tweeted about attempts to tear down statues and monuments, an issue to which he has mounted a major administration response even as he remains largely in the background on coronavirus.

Pence, who Trump tasked in February with leading the coronavirus response, sought to balance the reality of record levels of positive tests with a rosy view of how the administration has handled the pandemic.

He said he would travel next week to Texas, Florida and Arizona, states where the virus is surging. And he acknowledged the country “still has work to do.”

But he insisted an increase in cases could be explained partly by scaled-up testing, an explanation Trump has seized upon as he seeks to explain why the virus is still raging.

“To one extent or another, the volume of new cases coming in is a reflection of a great success in expanding testing across the country,” Pence said.

As cases spiked in Oklahoma, Trump held a campaign rally last weekend in Tulsa, though turnout was dramatically lower than initially previewed by the campaign and the President himself. Some of Trump’s advisers later acknowledged privately that even some of Trump’s supporters remain wary of attending large events amid the ongoing pandemic.

Still, in the week following the rally, it has emerged that multiple campaign staffers who worked on the event tested positive for coronavirus. Dozens of US Secret Service personnel were told to quarantine. And some campaign staff have also quarantined.

Trump, meanwhile, has insisted on returning to normal after an extended period of lockdown that caused an economic slump. Even as case counts begin to surge, Trump has ruled out shutting down businesses again and says he thinks the economy will surge in the third quarter.

Following the rally in Tulsa, Trump spoke at an event for young supporters in Arizona — one of the states seeing coronavirus surging — where roughly 3,000 people packed into a megachurch with no social distancing and few attendees wearing masks.

Pence on Friday said Americans have the right to choose to attend campaign rallies, with large crowds and little ability to socially distance.

“Even in a health crisis, the American people don’t forfeit our constitutional rights,” he said. “And working with state officials as we did in Oklahoma, as we did in Arizona, we’re creating settings where people can choose to participate in the political process. And we’ll continue to do that.”

Yet few similar events are occurring outside of Trump’s campaign as concerts and sports seasons remain on hold.

At Friday’s briefing, Pence arrived bare-faced even as other members of the task force wore masks. Unlike Trump, Pence has worn a mask during his trips around the country, including on Thursday in Ohio.

Asked if he was concerned the wearing of masks had become overly political, Pence demurred.

“The first principle is that people ought to listen to their state and local authorities,” Pence said.