Pompeo Delivers R.N.C. Speech From Israel, With Eye Toward 2024 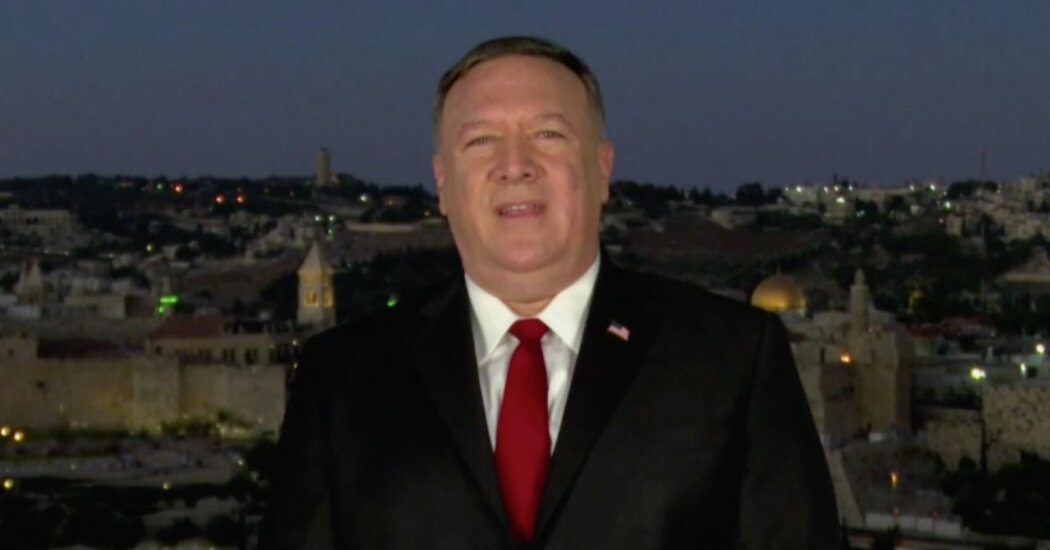 [What to watch for tonight at the Republican National Convention.]

WASHINGTON — In addressing the Republican Party faithful on Tuesday night from one of the world’s holiest cities, Secretary of State Mike Pompeo is betting that he has more to gain politically than he would lose by challenging decades of diplomatic decorum.

Mr. Pompeo spoke to the Republican National Convention in a pretaped speech from Jerusalem, with the lights of the Old City and its Jewish, Muslim and Christian shrines visible over his shoulder. It provided him with a vantage point to punch at American adversaries, including Iran and the Islamic State, and to praise one of President Trump’s few foreign policy achievements that has received wide and bipartisan support: the normalization of diplomatic relations between Israel and the United Arab Emirates.

It also gave him a national platform with Mr. Trump’s core supporters — a political base that Mr. Pompeo is courting as he weighs a future presidential campaign.

“I have a big job — as Susan’s husband and Nick’s dad,” he said by way of introducing himself and his family to viewers.

Nearly four minutes later, he ended by referring to his military service decades ago. “As a soldier, I saw firsthand people desperate to flee to freedom,” Mr. Pompeo said. “The way each of us can best ensure our freedoms is by electing leaders who don’t just talk, but who deliver.”

It was the first time in at least 75 years that a sitting secretary of state addressed a national convention to nominate a party’s presidential candidate, said Michael Beschloss, a presidential historian.

“And that was not by accident,” Mr. Beschloss said. “There was a feeling that foreign policy should be sacrosanct, and that secretaries of state should not be mixing that directly in domestic politics.”

Assessing Mr. Pompeo’s political ambitions, Mr. Beschloss said, “If he has any interest in running for president in the future, this is a way of inserting himself into presidential politics, but at the cost of breaking an important tradition in American history.”

Mr. Pompeo has been under criticism since it became clear several days ago that he would be giving the speech while on an official diplomatic trip to the Middle East and North Africa.

For nearly a year, Democrats in Congress have accused Mr. Pompeo of violating the federal Hatch Act, which prohibits federal employees from engaging in political activities while on the job, by using taxpayer-funded government aircraft and hosting receptions at the State Department to further his political ambitions.

In January, the government’s Office of Special Counsel, which takes up whistle-blower complaints and investigates charges that officials have violated the Hatch Act, reported that it found no evidence that Mr. Pompeo acted improperly while exploring a Senate run from Kansas last year.

But hours before Mr. Pompeo’s speech aired on Tuesday, Representative Joaquin Castro, Democrat of Texas, questioned whether the convention appearance had violated the Hatch Act. He demanded that the State Department turn over information about plans, assistance and clearances that Mr. Pompeo received as he prepared to make his address.

Mr. Pompeo did not declare the convention speech on his public schedule. A State Department official said that no department resources — staff members or funds — would be used to film it.

Stuart Stevens, a Republican political consultant and former top strategist to Mitt Romney’s presidential campaign in 2012, said party loyalists “won’t care” whether Mr. Pompeo violated bans on engaging in partisan activities while traveling overseas on official business. “They might even like it,” Mr. Stevens said.

The bigger problem for Mr. Pompeo is the prospect of a Republican Party so fractured after November that those who follow Mr. Trump will be unable to draw the widespread support needed to win the 2024 presidential election.

Daniel Cameron, investigating the police killing of Breonna Taylor, mentioned her only in passing.

“This is not going to be a convention that people are going to look back on and be glad they were associated with it,” said Mr. Stevens, who is now advising the Lincoln Project, a campaign of Republicans who oppose Mr. Trump’s re-election.

He said Mr. Pompeo’s decision to deliver the speech — and the appearance of impropriety associated with it — could pose a problem with centrist Republicans. “I think most Americans care about not breaking the law, and it will be a negative for him,” Mr. Stevens said.

Since becoming America’s top diplomat in 2018, Mr. Pompeo has positioned himself as the most forceful defender of the president’s national security policy. The vast majority of Mr. Trump’s diplomatic priorities, however, have fallen flat — despite Mr. Pompeo’s insistence to the contrary on Tuesday.

Negotiations to freeze and dismantle North Korea’s nuclear program have stalled. The Trump administration’s so-called maximum pressure campaign to force Iran into a new nuclear deal has isolated the United States from its staunchest European allies. Efforts to force President Nicolás Maduro of Venezuela from power have so far failed. Threats to punish China and Russia have done little to stop either country from military encroachment, human rights abuses or other actions that could harm American interests.

After moving the American Embassy to Jerusalem — as Mr. Pompeo mentioned in his speech — Mr. Trump appears to have set aside his ambition to strike the “deal of the century” for peace between Israel and Palestinians. Instead, he and Mr. Pompeo are trumpeting the accord reached this month between Israel and the United Arab Emirates to normalize relations.

It is that deal that Mr. Pompeo highlighted on Tuesday, calling it one “that our grandchildren will read about in their history books.” Hours earlier, he met with leaders in Sudan and Bahrain, both of which are also considering diplomatic ties with Israel.

For Mr. Pompeo, an evangelical Christian, bolstering Israel serves dual purposes. Not only does it help protect America’s strongest ally in the volatile Middle East, but it also appeals to white evangelical voters, a critical part of Mr. Trump’s base.

“By speaking in Jerusalem, he is speaking to the evangelical segment of the Republican Party,” said Tamara Cofman Wittes, a former deputy assistant secretary of state for Middle East policy during the Obama administration who is now at the Brookings Institution in Washington.

“We know Pompeo has broader political ambitions,” Ms. Wittes said. “So is this for Trump? Is this for Pompeo? It’s probably for both.”

Mr. Pompeo is far from the first cabinet official to speak at a national political convention. Five spoke at the Democratic convention in 2012, although none were foreign policy officials, and critics said his speech taints a State Department adage that domestic politics stop at the water’s edge.

The State Department disallows Senate-confirmed presidential appointees from even attending political conventions, and a July 24 cable from Mr. Pompeo himself advised employees against engaging in partisan political activity while abroad, “even on personal time.”

But given the chance to promote Mr. Trump — and showcase himself — Mr. Pompeo decided to defy his own guidance.

“I assume that Pompeo is like any other ambitious politician,” said Mark Dubowitz, the chief executive of the Foundation for Defense of Democracies. “He has the future in mind, and certainly wrapping up the evangelical vote for 2024 is absolutely critical to the success of any Republican candidate. I can’t imagine it’s not in the back of his mind.”