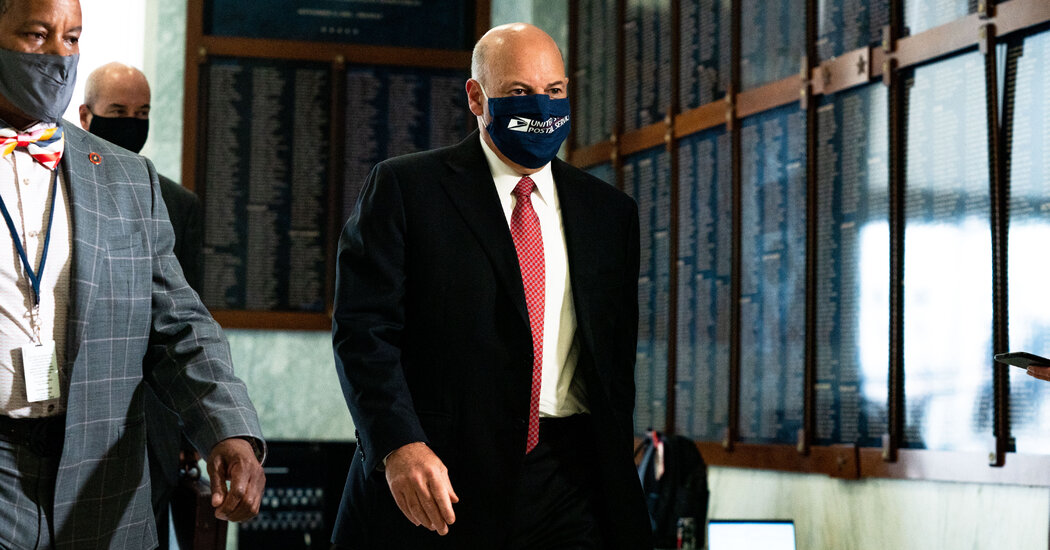 WASHINGTON — The United States Postal Service has paid about $286 million over the past seven years to XPO Logistics, the former employer of Postmaster General Louis DeJoy. He still holds at least a $30 million stake in the company, which has ramped up its business with the Postal Service since he took the helm at the agency.

The figures, obtained by The New York Times from a public records request, shed new light on the extent to which the company where Mr. DeJoy was a top executive — and in which he still has a substantial amount of money invested — is intertwined with the agency he now runs, fueling questions about a potential conflict of interest. They emerged on the same day that the House Oversight Committee issued a promised subpoena for documents that the panel has said Mr. DeJoy is withholding from Congress, including information about his personal financial affairs.

Through about 100 contracts with XPO Logistics and its subsidiaries, the Postal Service has paid the firm $33.7 million to $45.2 million annually since 2014 for services that include managing transportation and providing support during peak times.

The documents also show a surge in revenue for XPO from the Postal Service since Mr. DeJoy took over on June 15. The Postal Service paid XPO Logistics and its subsidiaries about $14 million over the past 10 weeks, compared with $3.4 million during the same time frame in 2019 and $4.7 million in 2018.

A spokesman for XPO attributed the uptick to the expansion of a contract with the Postal Service that was amended in December, months before Mr. DeJoy was selected to lead the agency.

David Partenheimer, a spokesman for the Postal Service, said that Mr. DeJoy had no involvement in contracting decisions and had recused himself from any involvement in dealings with his former company.

“The postmaster general correctly stated that he has ‘nothing to do with’ XPO’s contracts with the Postal Service,” Mr. Partenheimer said in an email. “The contracting officers making contracting decisions about work with XPO are many levels below the C.E.O. on the organization chart.”

Mr. DeJoy, he added, was “prohibited by the government ethics rules from any involvement with XPO’s U.S.P.S. contracts.”

Mr. DeJoy has come under scrutiny for his continued financial ties to XPO, a $16 billion logistics firm. He served as the chief executive of the company’s supply chain business until 2015 and was a board member until 2018. He continues to hold $30 million to $75 million in the company, and received $1.86 million in rent last year from XPO through a leasing agreement he brokered while still at the firm.

Mr. DeJoy has been a particular target of congressional Democrats, who have been alarmed by President Trump’s baseless claims that voting by mail is fraudulent. They have blamed Mr. DeJoy, a Republican megadonor and an ally of Mr. Trump’s, for making cost-cutting changes at the agency that have coincided with a slowdown in mail deliveries.

In response to calls from Democrats in Congress for an investigation, the Postal Service’s inspector general has opened an inquiry into Mr. DeJoy’s operational changes and his personal finances, including his ownership of XPO stock.

In testimony before Congress last week, Mr. DeJoy said he took his ethical obligations seriously and had fully complied with federal ethics rules.

“I have a significant investment in XPO Logistics, which I vetted before with the ethics department of the Postal Service, and I was given specific types of guidelines that I needed to adhere to,” he testified. “It’s a very, very small part of the Postal Service business I have nothing to do with.”

“XPO was not one of our top 50 contractors last year or this year,” he said.

On Wednesday, Representative Carolyn B. Maloney, Democrat of New York and the chairwoman of the House Oversight Committee, issued a subpoena for Postal Service documents related to mail delays and Mr. DeJoy’s communications with the Trump campaign. Included in the subpoena were orders for his calendar and his communications with companies in which he has a financial interest.

It placed a deadline of noon on Sept. 16 for Mr. DeJoy to turn over the documents. The Postal Service said in a statement that it intended to “fully comply” with its legal obligations.

In a statement, XPO sought to minimize its ties to the Postal Service, which industry analysts say comprises only a sliver of the company’s overall business.

“If the U.S.P.S. scales down and performs less of its own service, it will benefit companies that deliver packages to people’s doors, not XPO,” the company said in a statement on its website.