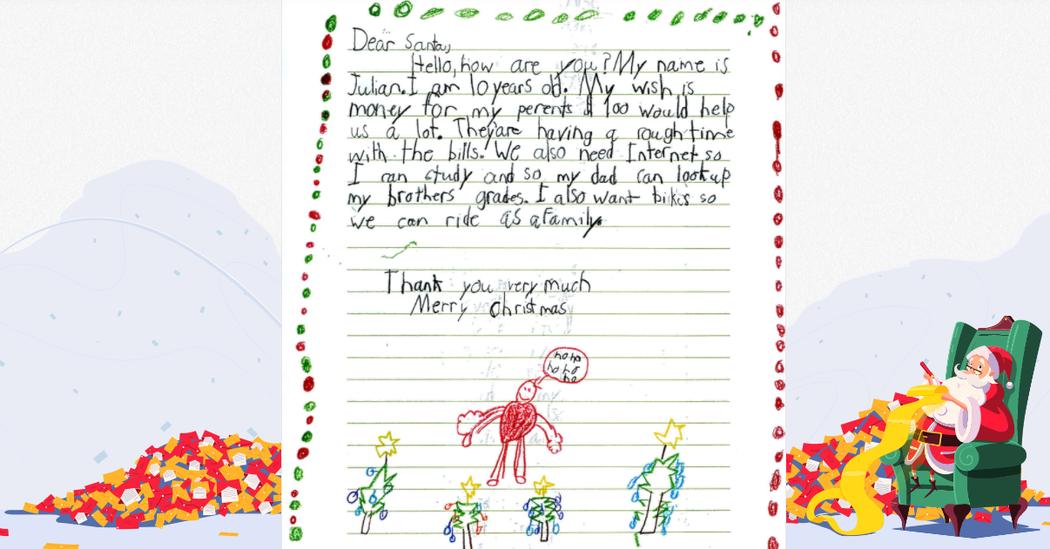 For more than a century, it was a simple way of making a child’s dreams come true during Christmas. Volunteers could go to the post office, sift through piles of letters that children had sent to Santa Claus and pick one — or more — that tugged at their heartstrings. Gifts were then acquired, wrapped and shipped to families whose space beneath the tree might otherwise be bare.

With the coronavirus pandemic still raging, however, the U.S. Postal Service announced on Monday that it was taking its annual “Operation Santa” campaign nationwide, and that letters to Santa might be read exclusively online by people across the country.

Some things aren’t changing: Much as it had over the past 108 years, the Postal Service said that it was inviting American children to write letters and to mail them to the North Pole, using a special address and ZIP code and affixing the proper postage.

This year, however, the letters will be uploaded to the Operation Santa website, so long as they are legible and make specific requests for items like toys, clothes or games. Starting on Dec. 4, postal customers can then read them and choose to send gifts with their responses, with a signature saying it’s from Santa (or St. Nick, Kris Kringle or any of Santa’s many names).

“Covid-19 has caused undue hardships, both financial and emotional, to so many Americans this year,” Kimberly Frum, a spokeswoman for the Postal Service, said in an email. “The program provides kids and families with an opportunity to receive gifts during the holidays from anonymous, generous postal customers.”

Those customers used to review the letters in person, but Operation Santa has moved largely online in recent years after a pilot program in 2017. By 2019, the online operation had expanded to 15 cities, including New York, Chicago, Denver and Grand Rapids, Mich., to, “enhance the ability for generous people across the nation to help those in need no matter where they live,” Ms. Frum said. So-called legacy programs still operated in New York and Chicago, where customers could go to a post office to read letters in person, but those programs will not be offered this year because of the pandemic, Ms. Frum said.

The move to make the program available nationally is an acknowledgment of the grim reality many Americans face going into the holiday season. Widespread job losses have contributed to a situation in which one in eight families don’t have enough to eat. Though jobs have started to return, with last month’s jobs report showing a full percentage point drop in the unemployment rate, the number of long-term unemployed people — those out of work for more than half a year — rose by 50 percent to 3.6 million. And a steep increase in coronavirus cases in recent weeks threatens those fragile economic gains.

The Postal Service said the Operation Santa program had received hundreds of thousands of letters each year.

“It seems like a small thing,” Ms. Frum said. “But for anyone who is struggling, it’s a huge deal to be able to give or receive a gift and share in a bit of the joy that is the holiday season.”