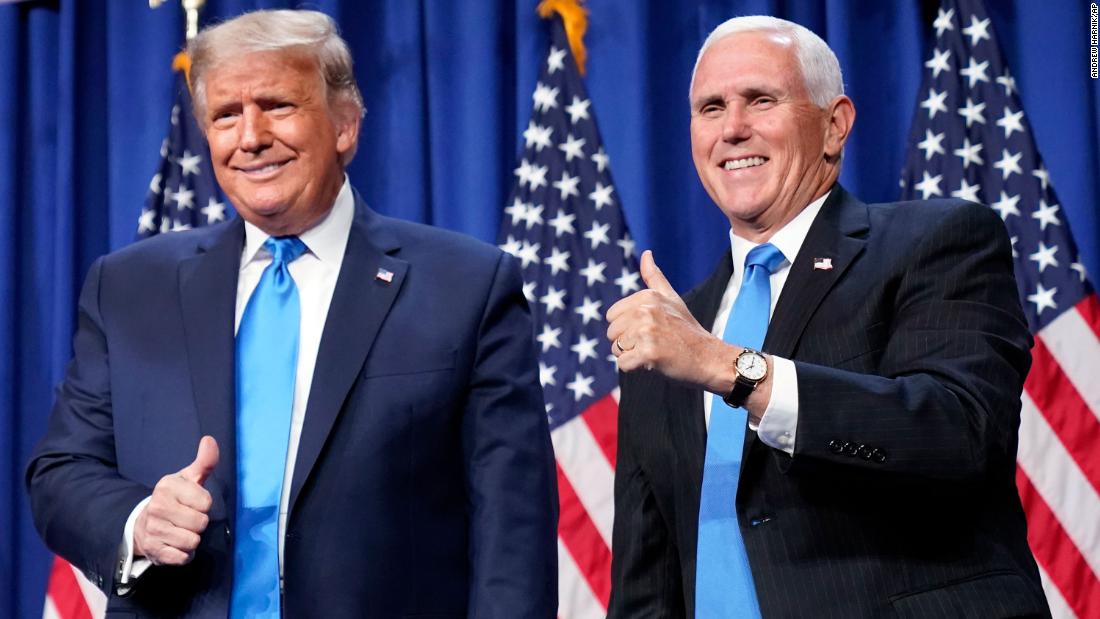 South Carolina Sen. Tim Scott delivered the closing speech on the first night of the party’s convention, and — invoking the names of Black people who had been shot by police, including George Floyd and Breonna Taylor — he touched on his own roots as the son of mother who “worked 16 hours a day to keep food on the table” and a “roof over our heads” as they shared a two-bedroom house with his grandparents.

“We live in a world that only wants you to believe in the bad news, racially, economically and culturally polarizing news,” Scott said. “The truth is, our nation’s arc always bends back towards fairness. We are not fully where we want to be … but thank God we are not where we used to be. We are always striving to be better.”

Scott, who led the Republican efforts on police reform legislation after Floyd’s death, said the GOP is working “on policy — while Joe Biden’s radical Democrats are trying to permanently transform what it means to be an American.”

“Make no mistake: Joe Biden and Kamala Harris want a cultural revolution, a fundamentally different America,” Scott said. “If we let them, they will turn our country into a socialist utopia and history has taught us that path only leads to pain and misery, especially for hard-working people hoping to rise.”

Trump’s former ambassador to the United Nations Nikki Haley attempted to burnish Trump’s image on the world stage even as America’s standing has fallen across the globe during his presidency. She argued that unlike former President Barack Obama and Biden, Trump has projected strength around the world while Biden would be “good for Iran and ISIS” and “great for Communist China.”

“He’s a godsend to everyone who wants America to apologize, abstain and abandon our values,” said Haley, the former governor of South Carolina. “Donald Trump takes a different approach. He’s tough on China, and he took on ISIS and won, and he tells the world what it needs to hear.”

Haley made that argument despite the fact that Trump is viewed unfavorably around the world. Earlier this year, the Pew Research Center found that across 32 countries, a median of 64% said they do not have confidence in Trump to do the right thing in world affairs, while only 29% expressed confidence in the President.

Haley, speaking as an Indian-American woman who was the first minority and female elected as governor in South Carolina, called out Democrats for decrying systematic racism in America.

“In much of the Democratic Party, it’s now fashionable to say that America is racist. That is a lie. America is not a racist country. This is personal for me. I am the proud daughter of Indian immigrants,” she said, noting that her father wore a turban and her mother wore a sari. “America is a story that’s a work in progress. Now is the time to build on that progress, and make America even freer, fairer, and better for everyone. That’s why it’s tragic to see so much of the Democratic Party turn a blind eye toward riots and rage.”

She added, “The American people know we can do better. And of course we know that every single black life is valuable.”

A week after Joe Biden’s party spent days highlighting his empathy with personal stories about the former vice president, Trump and his party attempted to do the same in roundtables with front-line workers responding to the coronavirus pandemic and people who his administration freed from captivity abroad.

In Trump’s first appearance of the night, a Louisiana surgeon, Dr G.E. Ghali said that Trump had torn down regulatory barriers to the development of vaccines and therapies. It is correct that the drive for a vaccine, in the US and elsewhere is moving at unusual speed — though not as quickly as the President says it is. But neither the video nor the speech explained why the United States has failed to put in place a national test and tracing system or why it has only 4% of the world’s population but has a quarter of its coronavirus infections.

In his second appearance of the night, the President was featured in a video from the White House with American hostages freed by foreign countries during his administration. “We got you back,” Trump told Sam Goodwin, who was held in Syria in 2019.

Other featured Americans held been abroad in countries that included in Turkey, Iran and Venezuela.

While Trump mostly allowed the former hostages to tell their stories, he at one point told Pastor Andrew Brunson — imprisoned by Turkey’s President Recep Tayyip Erdogan — that the strongman leader “was very good. … He ultimately, after we had a few conversations, he agreed.”

Trump has been more successful in freeing hostages than most other recent presidents.

He has kept in place revisions adopted by the Obama administration that make it easier for families of those held to talk to their captors. His government has also piled pressure on foreign governments to free Americans but officially sticks to the principle that there can be no negotiating with hostage takers.

However, some experts worry that events like Monday’s, which showed the President personally and politically deeply invested in claiming credit for freeing hostages, could put a bigger prize on the heads of Americans who are in vulnerable situations abroad.

Republicans pitched Trump’s response to the coronavirus pandemic as a massive success on Monday, despite large majorities of Americans feeling like the President and his administration have bungled the crisis.

In his first surprise appearance of the night, Trump met with health care, law enforcement and other workers who have been on the front lines during the pandemic. Throughout the evening, other average Americans shared stories of how Trump’s actions have helped them survive the pandemic and the economic downturn, which led to tens of millions of Americans losing their jobs.

During a back-and-forth with front-line workers, Trump portrayed the federal government as having come to the rescue of governors, who were scrambling for personal protective equipment during the early months of the pandemic.

“I appreciate what you said because we have delivered billions of dollars of equipment that governors were supposed to get, and in many cases they didn’t get,” Trump said. “So the federal government had to help them, and all of the people that did this incredible work — they never got credit for it. But you understand where it came from. Thank you very much.”

The party devoted more than 10 minutes attempting to alter public perceptions of Trump’s widely criticized handling of the coronavirus pandemic, choosing to take that issue “head on,” according to event organizers. In a video, the Republican National Convention misrepresented Trump’s handling of the coronavirus, repeating a flurry of falsehoods about Trump’s attitude towards a pandemic that has now killed nearly 180,000 Americans and that he initially denied would be a problem, then neglected and ignored.

Despite attempts by Trump and Republicans to portray his response to the coronavirus as a success, the US is still the world’s leader in total cases and deaths.

While Trump has focused on his January 31 announcement that banned foreign nationals from China from entering the US, many medical experts say that he lost valuable time in February when he resisted making major moves to contain the virus, insisting that it would just go away.

He refused to ask the federal government to take the lead on Covid-19 testing or even for devising a plan to fight the pandemic, insisting that governors were responsible for ramping up testing and determining their own protocols — which led to wide variation in the response across the country.

He did not announce the coronavirus shutdown until mid-March and then berated governors who he believed were reopening their economies too slowly, even though many of them did not meet the criteria that the US Centers for Disease Control and Prevention had set. Experts say that is one of the factors that led to a deadly summer surge in cases.

And it was not until July when Trump finally wore a mask publicly during a visit to wounded service members at Walter Reed National Military Medical Center.

There have, however, been some signs of progress. This past weekend, the seven-day average of coronavirus deaths dropped below 1,000 a day for the first time since July.

Tapping his roots as a television producer, Trump has been heavily involved in the planning for the four-day event, instructing organizers that he wanted to do more live programming and dynamic segments than the Democrats broadcast during their convention last week. However, it appears many speeches were pretaped for at least the convention’s first night as plans were scrambled due to the coronavirus.

Though he has criticized Biden and the Democrats for holding what he called the darkest, angriest, gloomiest convention in history, he touched off the convention Monday morning by unearthing his grievances from the 2016 election and falsely suggesting that the election will be rigged against Republicans because many voters are turning to mail-in ballots due to concerns over the coronavirus pandemic.

And despite party officials’ promises of an optimistic, positive convention, early speakers followed Trump’s lead from earlier in the day and tore into Biden and his running mate, Sen. Kamala Harris, adopting Trump’s dark framing of a nation on the brink.

Donald Trump Jr., one of the night’s keynote speakers, launched a fiery assault against “Beijing Biden” who he described as “the Loch Ness Monster” of the swamp.

Trump Jr. claimed Democrats no longer believe in the “goodness” of America — including the rule of law — the Washington institutions that his father has consistently attacked since taking power.

“Joe Biden and the radical left are now coming for our freedom of speech,” Trump Jr. claimed.

The President’s son has emerged as one of the purest avatars of his father’s populist nationalist creed, and is a sought after speaker at Republican events across the country. He regularly engages in fierce Twitter feuds with Trump’s critics, lacerating the media and piling on Obama, Hillary Clinton and Biden. His recent Twitter post of a video spreading false information about the coronavirus and saying people did not need to wear masks earned him a temporary suspension from the platform.

That atmosphere was perhaps best encapsulated in a passionate speech from Kimberly Guilfoyle, a former Fox News personality who now works as a senior adviser to the Trump campaign and is Trump Jr.’s partner.

She claimed Biden and Harris, and their “socialist comrades,” would adopt policies similar to those she said destroyed Cuba and Venezuela.

“They want to destroy this country, and everything that we have fought for and hold dear. They want to steal your liberty, your freedom. They want to control what you see and think, and believe, so they can control how you live,” she said, shouting into an empty room in the Mellon Auditorium in Washington, DC, as though she was in front of a huge convention crowd.

“They want to enslave you to the weak, dependent, liberal, victim ideology, to the point that you will not recognize this country or yourself,” she added.

In opening the convention, Charlie Kirk, founder of a key conservative students organization, warned that American freedoms were at risk from “bitter, deceitful, vengeful, arrogant activists.” School choice activist Rebecca Friedrichs warned that “unions are subverting our republic.” Florida Rep. Matt Gaetz said that Biden and Harris were a front for left-wing radicals.

“They’ll disarm you, empty the prisons, lock you in your house and invite MS-13 to live next door,” Gaetz said.