Republicans Renominate Trump in a Roll Call Infused With Fear-Mongering 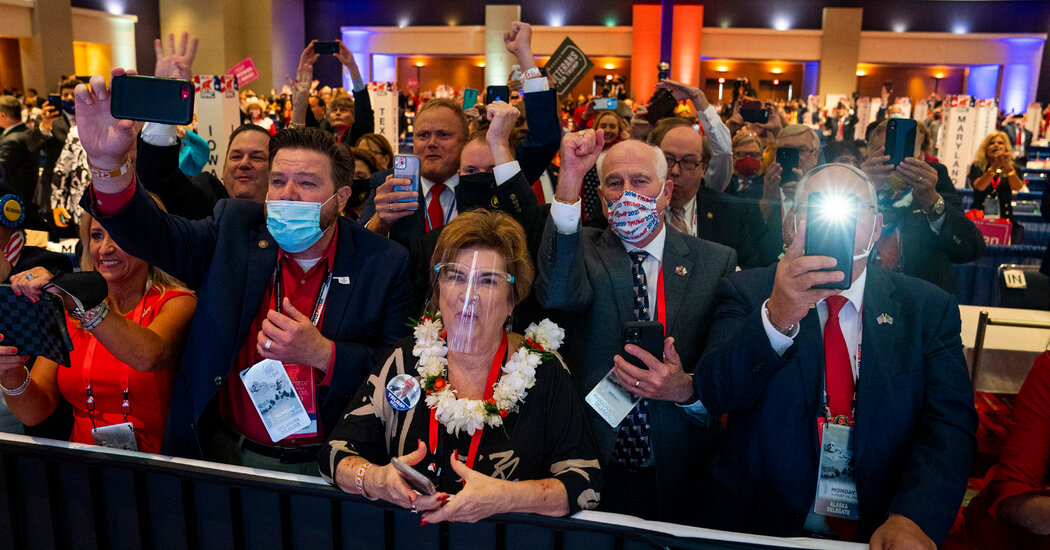 [Our guide to tonight’s RNC schedule and speakers, including where and how to watch.]

CHARLOTTE, N.C. — The alphabetical state roll call at the Republican National Convention on Monday morning didn’t make it past Arkansas before someone made a disparaging reference to President Trump’s forever foil, Hillary Clinton.

After tests and temperature checks, 336 delegates representing 50 states, five territories and Washington, D.C., gathered inside a ballroom at the Charlotte Convention Center on Monday morning to officially renominate Mr. Trump, who made an in-person appearance where he cast doubt in advance on the November election and attacked mail-in voting, accusing Democrats of “using Covid to steal the election.”

Under the vertical state signs that typically dot a convention floor, representatives from each state and territory participated in a fairly traditional convention roll call, one which was laced with fear-filled warnings about electing former Vice President Joseph R. Biden Jr., and cowing to the values of the Democratic Party.

Arizona’s delegation chairman, Michael Ward, credited Mr. Trump with having “flattened the China plague curve” as he cast his state’s votes for the president. Representing Colorado, Ken Buck noted his state’s votes were being cast for Mr. Trump because he had “protected us from a worldwide pandemic.” And when Louisiana announced its votes for Mr. Trump, a delegate noted that “Joe Biden is hiding in the dark, waiting to take the lives of our unborn babies.”

But the most sustained attacks on Mr. Biden came from Mr. Trump himself. Instead of using the moment of his renomination to lay out an agenda for a second term, he repeated his unfounded allegations that President Barack Obama, along with Mr. Biden, had spied on his campaign in 2016. “We caught them doing really bad things,” the president said. “Let’s see what happens. They’re trying it again.”

In rambling remarks that lasted just under an hour, Mr. Trump touched on the lives lost to the pandemic only as an afterthought, telling the crowd that “we will never forget the 175,000 people — that will go up,” and claimed that the death toll would have been millions more without the travel bans he had put into effect. He also downplayed the continuing threat of the virus — which Democrats had made a centerpiece of their convention — claiming without evidence, that Democratic governors across the country were only imposing shutdowns on their states in order to hurt his political chances in November.

There were, however, some concessions made to a large group gathering in the coronavirus era. Microphones were cleaned after every speaker. Signs in the lobby discouraged delegates from hugging or handshaking, encouraging elbow bumps instead. Masks were technically required until the person representing his or her state stepped up to the microphone to speak — although many delegates shed their face coverings upon entering the ballroom and were mingling and posing for pictures unmasked and with their arms around one another.

Still, what was lacking was the electric feel of a typical convention floor. Just six representatives from each state and territory were allowed in the room, and they were seated at a distance from one another. Gift bags stuffed with red tissue paper and “Make America Great Again” caps added some color to the room.

The scene was a stark contrast to how the Democrats conducted their virtual roll call last week, featuring videos filmed across the country that highlighted local landmarks.

The breakout star of the Democratic travelogue montage — a seafood chef from Rhode Island who displayed a plate of calamari, the state appetizer, while Rhode Island announced its votes for Mr. Biden — was proof that sometimes ingenuity can turn a complication into a perk. It all made for strangely compelling television viewing.

The Republicans, intent on preserving as much of an in-person look and feel to their convention as possible, chose to go a more habitual route.

“We are effectually calling it Trumptana,” said Don Kaltschmidt, chairman of the Montana Republican Party, as he introduced his state. “We fish, we hunt, we boat and we have at least five guns in every home.” Kristi Noem, the governor of South Dakota, received some of the biggest cheers of the day when she declared, “We are grateful to President Trump for bringing fireworks back to Mount Rushmore,” referencing the speech he gave there in July for an Independence Day celebration.

Republican officials said holding the in-person roll call on Monday morning would give them more coverage. But Mr. Trump complained in his remarks that not even Fox News aired the proceedings without commentary from its own anchors, and he was forced to change the channel to C-SPAN aboard Air Force One. The Republicans gathered in Charlotte were competing for coverage with Postmaster General Louis DeJoy, who testified on Monday in front of the House Oversight Committee amid concerns over how changes he was carrying out at the agency would affect mail-in voting in the November election.

Gathering delegates in person risked creating exactly the kind of scene that Mr. Trump originally scoffed at when he tried to move the convention to Jacksonville, Fla., from Charlotte: an address in front of a masked and distanced crowd that would make the room look mostly empty. But instead of staying in their socially-distanced seats, attendees crowded around the stage while he spoke and danced to The Village People’s “Y.M.C.A.” as he departed.

“It’s a little different from what we experienced four years ago,” said Corey Lewandowski, Mr. Trump’s former campaign manager, who is the chairman of the New Hampshire delegation.

Mr. Lewandowski joked that despite all of the precautions necessary to keep the delegates safe and to comply with state rules, “this may be the most fun people have ever had at a convention.”

Another longtime Trump loyalist and adviser, David Bossie, spoke on behalf of Maryland, his home state.

Vice President Mike Pence also spoke to the delegates assembled, making a counter argument to the Democrats’ framing last week that “democracy is on the ballot” in November, and claiming instead that “the economy is on the ballot.”

During the weekend of Republican National Committee meetings that preceded Monday’s roll call, the party passed a series of resolutions that condemned progressive groups and culture. Among them was a resolution to uphold the First Amendment in response to the pandemic “and the cancel culture movement,” referring to the virus as the “Chinese coronavirus outbreak.”

The resolution states that the right to attend church services and sports events has been “infringed, abused and denied” while “opportunistic violent protesters and casino-goers are still allowed the right to assemble.”

Republicans decided they would not adopt a new party platform, and they passed a resolution to leave in place the platform from four years ago.

The R.N.C. also passed a resolution aiming to undermine the legitimacy of the Southern Poverty Law Center, a legal advocacy group dedicated to fighting extremism in the United States, calling it a “radical organization” that “puts conservative groups or voices at risk of attack.”

Margaret Huang, the president and chief executive of the group, said the resolution was designed to “excuse the Trump administration’s history of working with individuals and organizations that malign entire groups of people — including Black Lives Matter advocates, immigrants, Muslims and the L.G.B.T.Q. community — with dehumanizing rhetoric.”