Republicans to include $1,200 checks and smaller federal unemployment aid in new stimulus proposal 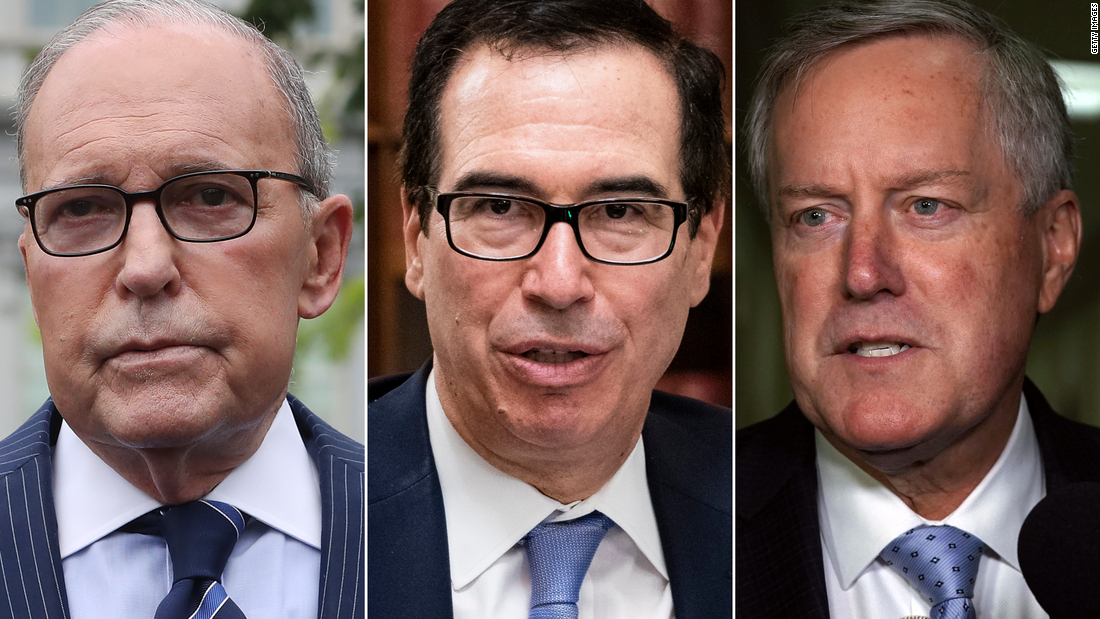 White House economic adviser Larry Kudlow told CNN’s Jake Tapper on “State of the Union” that $1,200 checks to Americans will be part of the new recovery package, in addition to reemployment bonuses, retention bonuses and tax credits for small businesses and restaurants.

The new provisions are slated to be unveiled on Monday, in hopes of replacing benefits that officials characterized as potentially incentivizing recipients not to return to work. “We want to move forward quickly, the bill will be introduced Monday, we are prepared to act quickly,” Treasury Secretary Steve Mnuchin said on “Fox News Sunday.”

Kudlow told Tapper that “we have had a flood of inquiries and phone calls and complaints that small stores and businesses and restaurants can’t hire people back.”

“They went too far,” he continued. “Maybe last March, it was necessary for that, but really the consequences of people not returning to work … we want to pay folks to go back to work.”

The enhancement was designed to keep laid-off people at home instead of out looking for work during the pandemic-fueled lockdowns and has helped millions pay the rent, buy groceries and cover other bills. But it has also kept some workers on the sidelines — creating headaches for employers trying to get back up and running, even as new coronavirus surges complicate state reopenings.

Lawmakers on Capitol Hill have been divided about whether to extend the federal boost, with Democrats saying it should be extended into next year because the economy is still weak and the unemployed say they are having trouble finding positions, as well as childcare.

Republicans, however, are concerned that such generous payments may deter people from going back to their jobs, which would slow the economic recovery.

And even as Republicans are gearing up to release their coronavirus stimulus bill, Republican Sen. Lindsey Graham had a stark prediction for an upcoming vote on such legislation.

“Half the Republicans are going to vote no to any Phase 4 package, that’s just a fact,” Graham said in an interview on Fox News’ “Sunday Morning Futures,” though he noted, “I think we will come together before August the 5th to get this done.”

The chief of staff also confirmed he and Mnuchin are returning to Capitol Hill on Sunday to continue going over details of the bill.

Meadows said the proposal will involve offering enhanced unemployment benefits that would replace a laid-off worker’s wages up to 70%, although he acknowledged challenges some states will face in administering such a complicated benefit. He said he has worked with Mnuchin and Labor Secretary Eugene Scalia to ensure “antiquated computers” in some state benefit offices don’t stop people from receiving their benefits.

Related: These 12 charts show the economic recovery is on pause

House Speaker Nancy Pelosi addressed Republicans’ potential benefit change on Sunday, saying on CBS’ “Face the Nation” that she would prefer to see enhanced unemployment benefits paid at a flat rate, not as a portion of a worker’s lost wages as Republicans are preparing to propose.

“Let me just say: the reason we had $600 was its simplicity,” Pelosi said, noting that calculating 70% of someone’s lost earnings would be difficult for administrators. “Why don’t we just keep it simple? Unemployment benefits and the enhancement… is so essential right now.”

Pelosi declined to say whether Democrats would be willing to accept an unemployment insurance enhancement that is lower than $600.

“We’ve been anxious to negotiate for two months and 10 days,” Pelosi said, criticizing Republicans for taking so long to propose another stimulus package.

“We can’t go home without it, but it’s so sad that people should have this uncertainty in their lives,” she said.

Senate Minority Leader Chuck Schumer said Sunday that Democrats are against the GOP officials’ plan to limit unemployment benefits and that internal division remains among Republicans on the issue.

“We are for extending it … we should not give a 30% pay cut to those who lost their jobs through no fault of their own,” Schumer said at a news conference. “The unemployment insurance has kept millions out of poverty, prevented the recession from becoming a depression, we need to extend it.”

Administration officials dropped a push for the payroll tax cut that Trump has repeatedly demanded after failing to secure support for it from enough Senate Republicans and after acknowledging it was a non-starter for Democrats.

“I would have preferred a payroll tax cut on top of that check, but be that as it may, politically it doesn’t work but the check is there,” Kudlow said on “State of the Union.”

When asked whether the change in benefits could harm the economy by jeopardizing those facing bills and evictions, Kudlow said that the combination of unemployment benefits capped at 70% of wages, reemployment bonuses and retention tax credit bonuses is “going to more than offset any of this.”

“The trick here is going back to work,” he added.