Ruth Bader Ginsburg Is Hospitalized With a Possible Infection 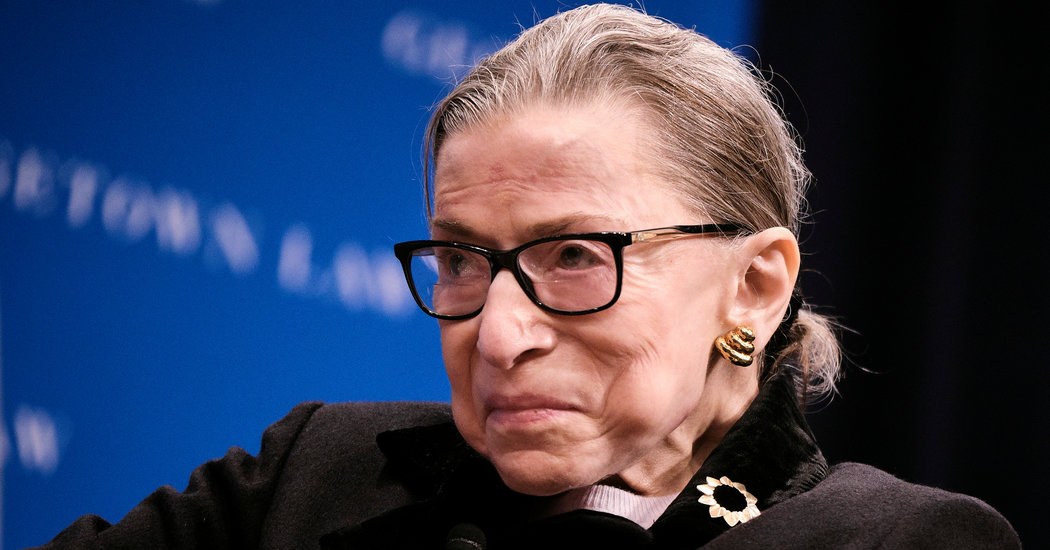 Justice Ruth Bader Ginsburg was admitted to the Johns Hopkins Hospital in Baltimore on Tuesday for a possible infection, a Supreme Court spokeswoman said — the latest health challenge for the senior member of the court’s liberal wing.

Justice Ginsburg, 87, underwent an endoscopic procedure to clean out a bile duct stent, the court’s spokeswoman, Kathleen Arberg, said in a statement. The stent was inserted last August while Justice Ginsburg was receiving treatment for a malignant tumor on her pancreas, which included focused radiation therapy.

On Monday night, Justice Ginsburg was evaluated at Sibley Memorial Hospital in Washington after experiencing a fever and chills, according to Ms. Arberg.

“The Justice is resting comfortably and will stay in the hospital for a few days to receive intravenous antibiotic treatment,” Ms. Arberg said.

Democrats have fretted over Justice Ginsburg’s health challenges and a potential retirement or vacancy on the court, which has moved rightward under President Trump.

Since taking office, Mr. Trump has nominated two justices to the nine-member court: Neil M. Gorsuch after the death of Antonin Scalia, and Brett M. Kavanaugh to replace Anthony M. Kennedy, who had been considered the swing vote on the court.

Justice Ginsburg is one of four liberal justices on the court, which last month struck down a Louisiana law that required doctors performing abortions to have admitting privileges at nearby hospitals. Chief Justice John G. Roberts Jr. joined the liberal wing in the ruling, which dealt a setback to conservatives who wanted to limit abortion rights.

In a blow for Mr. Trump, Justice Ginsburg voted with the majority this month in a ruling that said that the president did not have the authority to block the release of his financial records. The decision cleared the way for prosecutors in New York to seek Mr. Trump’s bank and accounting records and was viewed by court observers as a landmark ruling on the scope of presidential powers.

Justice Ginsburg has vowed to say on the court as long as she is of sound mind and body. She told CNN in January that last year’s treatment for the tumor on her pancreas had been successful.

Her doctors discovered the tumor in July after a routine blood test, and a biopsy at Memorial Sloan Kettering Cancer Center in New York City confirmed a localized malignant tumor.

“I’m cancer-free,” Justice Ginsburg said in the interview, adding that she had resumed an active schedule. “That’s good.”

It was the fourth time that Justice Ginsburg, who was nominated to the court by President Bill Clinton in 1993, had undergone cancer treatment.

In 2018, surgeons removed two malignant nodules from Justice Ginsburg’s left lung and determined that the cancer had not spread. In 2009, she had surgery for early-stage pancreatic cancer, and in 1999 she was treated for colon cancer without missing a day on the bench.

Justice Ginsburg maintained a busy schedule during her most recent cancer diagnosis with a series of speaking engagements. There has been a book (“Notorious RBG: The Life and Times of Ruth Bader Ginsburg”), a major motion picture, a documentary and merchandise, including a necklace pendant resembling the collar she wears when writing a dissenting opinion.

In an interview last year with National Public Radio, Justice Ginsburg notably brushed aside skepticism about her health, recalling a comment from a senator long ago.

“There was a senator, I think it was after my pancreatic cancer, who announced with great glee that I was going to be dead within six months,” she said. “That senator, whose name I have forgotten, is now himself dead, and I am very much alive.”