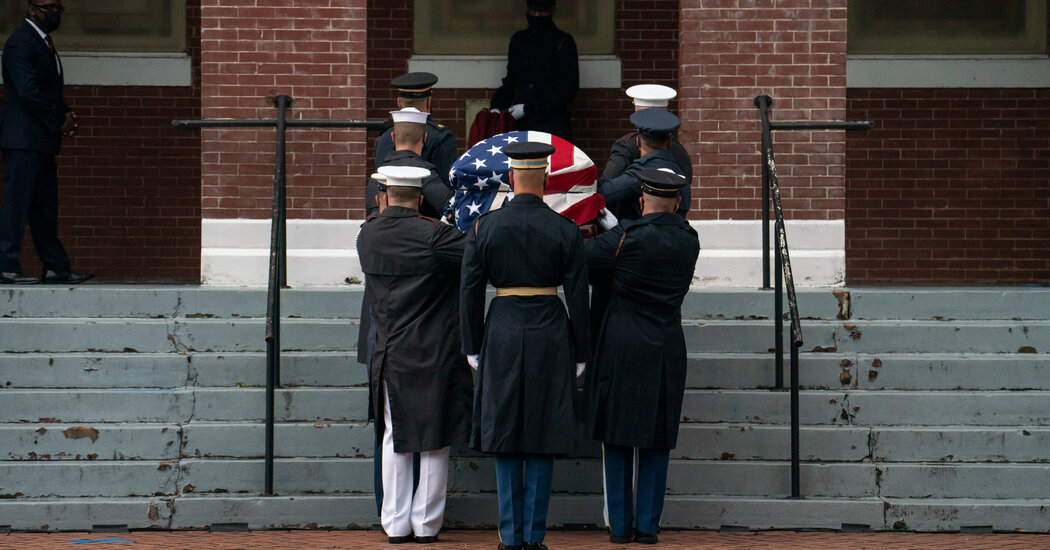 SELMA, Ala. — On a different Sunday in Selma, this one more than five decades ago, John Lewis was a 25-year-old activist wearing a long tan jacket and carrying a backpack, helping to marshal hundreds of demonstrators across the Edmund Pettus Bridge. They were bombarded by clouds of tear gas and swarmed by state troopers wielding clubs, one of which fractured Mr. Lewis’s skull.

Mr. Lewis, who died on July 17, crossed the bridge one last time on Sunday, his coffin carried by horses as part of a valedictory pilgrimage retracing the arc of his life. The trek started on Saturday in Troy, county seat of Pike County where he grew up on a cotton farm, and continues this week onto Washington, where he served in Congress, and Atlanta, which became his home.

But the tribute in Selma did not simply mark Mr. Lewis’s final trip to a place he had embraced as a wellspring of renewal and inspiration, drawing him back year after year. It was also a tacit acknowledgment, tinged with sadness but also satisfaction, that the generation that had steered the civil rights fight in the 1960s was now past its twilight and another one was emerging to pilot the movement through its latest iteration.

“It is the young among us in Alabama and across this nation who can heal what we have failed to heal in our lifetimes, no matter how hard John tried,” Senator Doug Jones of Alabama, a Democrat, said during a memorial service on Saturday night, contending that Mr. Lewis had been heartened by the younger activists leading the Black Lives Matter effort.

“He confidently looked around and said, ‘All is well,’” Mr. Jones said. “It is time for the torch to be passed. It is time for me to let go.”

In Washington, his colleagues will surely trumpet his legislative achievements and the degree to which he was viewed as the conscience of Congress. In Atlanta, with his funeral scheduled on Thursday at Ebenezer Baptist Church, pastors and elected officials will try to synthesize the totality of his life and work.

But this final journey through Alabama has been about Mr. Lewis’s origin story.

“This is where it all started for him,” Hydreca Lewis-Brewster, one of his nieces, said after a Saturday morning service in Troy, where a crowd of hundreds filed past his coffin to pay their respects.

During the service, his family, local officials and pastors talked about his enduring connection to a small town of roughly 19,000 people about an hour southeast of Montgomery, the state capital.

Many invoked Mr. Lewis’s message of “good trouble,” a belief that change can be propelled by a willingness to rebel against an oppressive system, even in the face of steep consequences.

“Good trouble allowed John to cross bridges blockaded by legalized lynchmen who were inspired by the false notion of racial supremacy,” said the Rev. Darryl Caldwell, the pastor of Antioch Missionary Baptist Church in the tiny town of Banks, just outside Troy.

“Thank you, father of all mercy, for John,” he went on, “who wore the mantle of good trouble and did not flinch in the face of fear when confronted by deputized demons who intended to discourage, deny and ultimately destroy the just course of John Robert Lewis.”

Henry Lewis, one of his brothers, who goes by Grant, remembered standing near his brother as he was sworn into Congress. Mr. Lewis looked in his direction and gave him a thumbs up. Later, Grant asked his brother what he had meant with the gesture. “This is a long way from the cotton fields of Alabama,” Mr. Lewis told him.

Mr. Lewis was rooted in a community that has been shaped by an inheritance of trauma, handed down through generations of slavery, segregation and disenfranchisement, yet just as much by a deep pride in the movement that rose up in defiance of that oppression.

He had been a link binding the legacy of the past to the protests of the present. His death was book ended by that of C.T. Vivian, another civil rights leader and associate of the Rev. Dr. Martin Luther King Jr., who died on July 17, and that of Charles Evers, who died on July 22 and was a pioneering figure in Mississippi who stepped up after the 1963 assassination of his brother Medgar.

“If we don’t carry on,” said the Rev. Dr. Jacquelyn L. Lancaster-Denson, a leader of the African Methodist Episcopal Church in Alabama, “he got in good trouble for nothing.”

The services drew many who had only fleeting interactions with Mr. Lewis, if they had ever met him at all, but nevertheless felt a bond with him.

“He always made you feel like you were somebody,” said Pasay Davidson, a fourth-grade teacher from Ozark, Ala.

Sharon Calkins-Tucker identified with him, she said, because she was also outspoken. “Without us,” she said, “nothing would get out and nothing would ever change.”

The hearse left Troy and traversed a winding route of country roads to Selma, a city of nearly 18,000 west of Montgomery on the Alabama River. It passed rows of modest family homes and churches but also evidence that time had not been charitable, like the industrial ruins and collapsing houses being swallowed by nature.

Political and civil rights leaders gathered with his family on Saturday night at Brown Chapel A.M.E. Church — the starting point for the protest on March 7, 1965 — walking from Selma to Montgomery.

“We in Selma were blessed to know John intimately,” said Representative Terri A. Sewell, a Democrat whose congressional district includes Selma, adding that the community had walked “in his footsteps year after year after year.”

On the street in front of the church were charter buses that had been packed with church groups from Georgia and satellite trucks from national news organizations. A line of people waiting to see his body snaked down the street.

Up the block, a group of men pitched a tent on the sidewalk for a fish fry, just as they have every Saturday for a few weeks. They started doing it as a way to fill the time left empty by coronavirus lockdowns, and on Saturday, they stayed long after dark, unspooling the world’s problems as they usually do.

They described the frustration that comes with living in a city that, for outsiders, was a living museum of one of its darkest days. It was also surreal, they said, to see the bridge, long taken for granted as a piece of the local landscape, becoming a marker of such important history.

“We went across that bridge 30 times a day and it didn’t mean anything,” said one of the men, an 82-year-old who only gave his first name, Artie. He said he had grown up in Selma, left for New York City for four decades, then returned home.

The men acknowledged the progress they said the bloodshed in Selma helped bring about: securing voting rights and creating more economic and educational opportunity. Yet they noted the biases that remain difficult to scrub away.

“The faces and the names have changed, but the game is still the game,” said a man who gave his name as Roy, and who moved to Selma from Montgomery 12 years ago.

Still, the bridge, which crosses the Alabama River and is named for a Confederate Army commander who later served in the U.S. Senate, carries enormous significance.

The bloodstained march had left an indelible impression on Mr. Lewis. At Comic-Con in San Diego in 2016, he led children on a march through the convention center, cosplaying himself, with a jacket similar to the one he wore in 1965 and a backpack with an apple, an orange, a toothbrush and books, like he had then.

He returned to the city regularly. “We come to Selma to be renewed,” he said at a 50th anniversary event in 2015. “We come to be inspired.”

And in March, after he learned he had pancreatic cancer, a crowd engulfed him on the bridge, and they hushed to hear him speak. “I thought I was going to die on this bridge,” he said.

“Go out there,” he told them in his raspy voice. “Speak up, speak out! Get in the way, get in good trouble! Necessary trouble! And help redeem the soul of America.”