St. Louis couple who pointed guns at protesters to speak at Republican convention 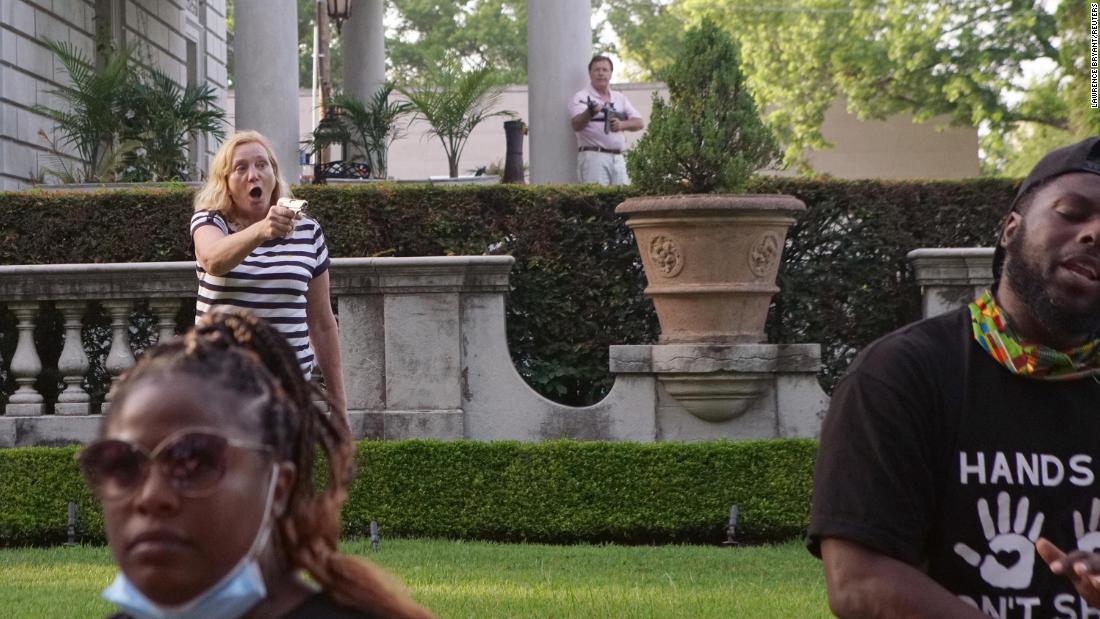 News of the couple’s expected appearance, first reported by the Washington Post, comes as Republicans are gearing up for an unorthodox convention, as part of efforts to energize voters during a pandemic and going into the last three months of the campaign. Democrats kicked off their party’s national convention Monday in a night of programming headlined by former first lady Michelle Obama, Vermont Sen. Bernie Sanders and New York Gov. Andrew Cuomo, among others.
A spokesman for Trump Victory and a Republican official confirmed to CNN later Monday that former Covington Catholic student Nick Sandmann, Andrew Pollack, the father of Parkland shooting victim Meadow Pollack, anti-abortion activist Abby Johnson, South Dakota Gov. Kristi Noem and Pennsylvania congressional candidate Sean Parnell will also be among the speakers at the Republican convention. The lineup, which is still being formed, was first reported by Breitbart News.
The McCloskeys drew national attention in late June after they were seen in a viral video brandishing guns outside their mansion at protesters walking on a private street en route to demonstrate outside the St. Louis mayor’s residence. The Missouri couple was charged in July with unlawful use of a weapon, a class E felony.

The White House has defended the couple on multiple occasions, with White House press secretary Kayleigh McEnany telling reporters at the time that President Donald Trump “said it is absolutely absurd, what is happening to the McCloskeys.”

In videos obtained by CNN, Mark McCloskey holds a long rifle and Patricia McCloskey holds a handgun as demonstrators, protesting Mayor Lyda Krewson’s decision to publish the names and addresses of people in favor of police reform, walked outside the home. Portland Place, the private street where the McCloskeys live, is near Krewson’s home.

Daniel Shular, a local reporter, took one of the videos and said he watched the entire roughly 10-minute long incident unfold. About 500 protesters were cutting through Portland Place, according to Shular, to bypass road closures nearby that blocked access to the mayor’s home.

“A door next to the gate at Portland Place was unlocked and protesters went through it to cut through the neighborhood to get to Krewson’s house,” he told CNN.

That’s when Shular says the McCloskeys came out of the house with the firearms. At one point in Shular’s 31-second video, Patricia McCloskey points the handgun in the direction of protesters. In multiple videos, it appears the McCloskeys and protesters exchange words, but it is unclear what is said.

Mark McCloskey has defended his actions towards the protesters, saying last month that he was “in imminent fear they would run me over, kill me.”

“I was a person scared for my life, protecting my wife, my home, my hearth, my livelihood. I was a victim of a mob that came through the gate,” he told CNN’s Chris Cuomo at the time.

McCloskey asserted that it is “ridiculous” to consider him the face of opposition to the Black Lives Matter movement after the incident.

This story has been updated with additional reporting on the RNC speaker lineup.