Suspect in Fatal Portland Shooting Is Killed by Officers During Arrest 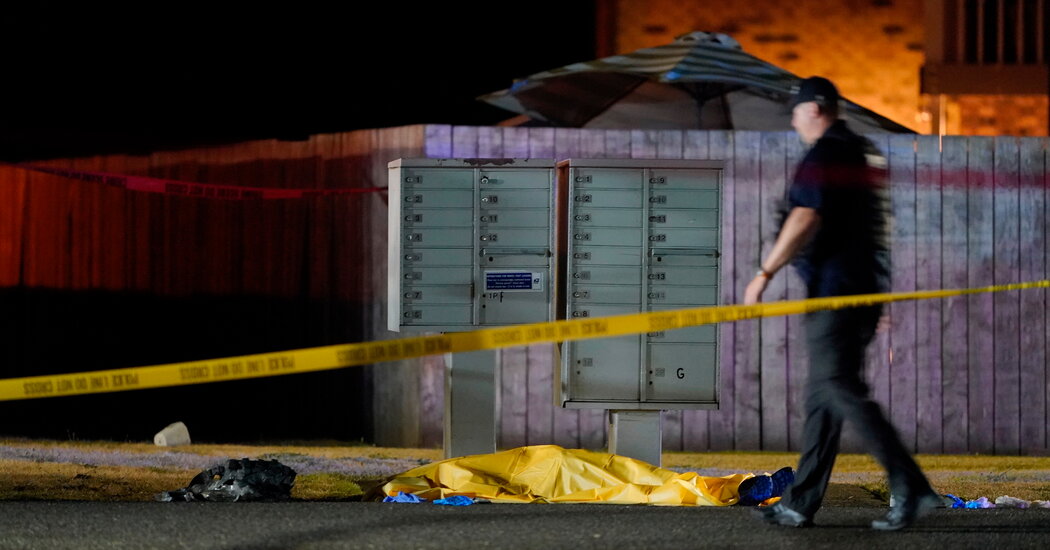 SEATTLE — Law enforcement agents shot and killed an antifa supporter on Thursday as they moved to arrest him in the fatal shooting of a right-wing activist who was part of a pro-Trump caravan in Portland, Ore., officials said.

The suspect, Michael Forest Reinoehl, 48, was shot by officers from a federal fugitive task force during the encounter in Lacey, Wash., southwest of Seattle, according to four law enforcement officials familiar with the investigation.

Lt. Ray Brady of the Thurston County Sheriff’s Office said in an interview that the law enforcement team was in the area looking for a homicide suspect — he could not confirm it was Mr. Reinoehl — and that the suspect exited an apartment and got into a vehicle.

“As they attempted to apprehend him, there was gunfire,” Lieutenant Brady said. He said four law enforcement officers fired their weapons.

Lieutenant Brady said the Sheriff’s Office, which is investigating the shooting, heard that the suspect was carrying a gun, but he did not immediately know whether the suspect fired a weapon.

An arrest warrant had been issued by the Portland police earlier Thursday, on the same day that Vice News published an interview with Mr. Reinoehl in which he appeared to admit to the shooting, saying, “I had no choice.”

The Portland police had been investigating Saturday’s shooting death of Aaron J. Danielson, one of the supporters of President Trump who came into downtown Portland and clashed with protesters demonstrating against racial injustice and police brutality.

Mr. Reinoehl had been a persistent presence at the demonstrations in Portland over recent weeks, helping the protesters with security and suggesting on social media that the struggle was becoming a war where “there will be casualties.”

“I am 100% ANTIFA all the way!” he posted on Instagram in June, referring to a loose collection of activists that have mobilized to oppose groups they see as fascist or racist. “I am willing to fight for my brothers and sisters! Even if some of them are too ignorant to realize what antifa truly stands for. We do not want violence but we will not run from it either!”

In the Vice interview, Mr. Reinoehl said he acted in self-defense, believing that he and a friend were about to be stabbed. “I could have sat there and watched them kill a friend of mine of color, but I wasn’t going to do that,” he said.

The fatal law enforcement encounter occurred on a residential street lined with townhomes and single-family houses in Lacey, not far from the Washington State capital of Olympia. The entrance to an apartment complex was blocked off by sheriff’s tape and law enforcement vehicles. Neighbors stood in groups outside in the glare of flashing sheriff’s vehicle lights.

Trevor Brown, 24, who lives in a townhouse nearby, said he heard several shots fired before he looked out the window and saw as many as four police officers in the road, who fired three or four times. He then said he saw Mr. Reinoehl lying on the ground.

Jashon Spencer, who also lives not far away, said he was at home before 7 p.m. when he heard a large number of gunshots. “I just heard a whole bunch of pops,” Mr. Spencer said. “I ducked. I thought they were shooting in my yard.”

He said that he went out and saw a bloodied man in the street, and that he captured the scene on video. Later, a law enforcement officer could be seen attempting CPR.

On July 5 during the protests, Mr. Reinoehl was charged with resisting arrest and possession of a loaded firearm, but the case was later dropped. At the end of July, he showed a bloodied arm to a journalist with Bloomberg QuickTake News and said he had been shot while intervening in a fight.

Reese Monson, a leader in the local protest movement who also helps organize security, said all the people who helped with security in Portland, including Mr. Reinoehl, were trained on de-escalation.

“He was excellent at that,” Mr. Monson said.

Mr. Monson said the security designees have been trained to approach potential agitators and politely ask them to leave. They have also been trained on how to conduct physical removals but are cautioned to try to avoid such measures because they can cause things to escalate. Mr. Monson said Mr. Reinoehl would often come over to discuss how to appropriately handle potential agitators.

The night of the shooting began with a large crowd of supporters of Mr. Trump gathering in the suburbs. They planned to drive hundreds of vehicles carrying flags around the highways of Portland, but many of them eventually drove downtown, where protesters have been congregating regularly. Once there, some Trump supporters shot paintballs into the crowd, while people on the streets threw objects back at them. Some fistfights broke out.

As evening turned into night, video appears to show Mr. Danielson, who was wearing a hat with the insignia of the far-right group Patriot Prayer, and Mr. Reinoehl on a street along with a few other people. One person was shouting, “We’ve got a couple right here.”

The man who captured video of the shooting, Justin Dunlap, said it appeared that Mr. Danielson reached to his hip.

“He pulled from his side, just like he was pulling a gun,” Mr. Dunlap said.

But in other video shot during the encounter, someone can be heard flagging that Mr. Danielson was pulling out a can of mace. “He’s macing you, he’s pulling it out,” the person warned.

Mr. Reinoehl said in his social media posts that he was once in the Army, and hated it, although an Army official said no record of service could be found under his name. In the Bloomberg interview, Mr. Reinoehl described himself as a professional snowboarder and a contractor.

His daughter was on scene during the July interview, and he said she had also been present during the encounter that left his arm bloodied.

“The fact is that she is going to be contributing to running this new country that we’re fighting for,” Mr. Reinoehl said. “And she’s going to learn everything on the street, not by what people have said.”

Mr. Reinoehl’s sister, who asked to remain anonymous because the family has received numerous threatening phone calls in recent days, said police officers asked if screenshots from videos from the night of the shooting looked like her brother. She said they did, but she said she has not seen him since three years ago, when she said family members broke off contact with Mr. Reinoehl after escalating conflicts.

At the beginning of June, in the days after the police killing of George Floyd in Minneapolis triggered nationwide protests, Mr. Reinoehl began posting about the need for change.

“Things are bad right now and they can only get worse,” he posted on June 3. “But that is how a radical change comes about.”

A few days later, authorities in eastern Oregon reported that Mr. Reinoehl was apparently racing his 17-year-old son as the two were driving in separate vehicles at over 100 miles per hour. Among other violations, authorities cited Mr. Reinoehl with driving under the influence, unlawful possession of a firearm and driving while uninsured.