‘Thanks for Flying SpaceX’: NASA Astronauts Safely Splash Down After Journey From Orbit 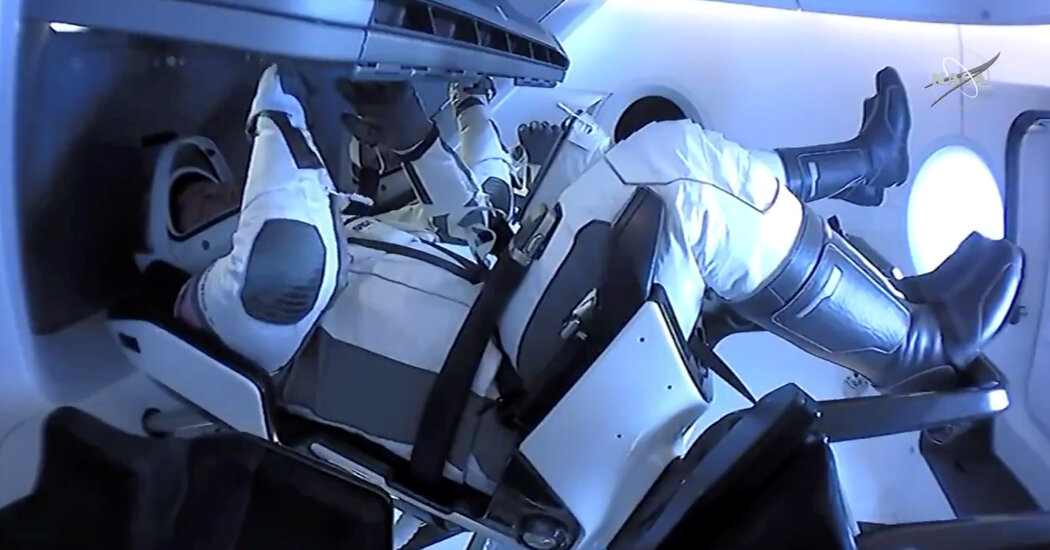 The first astronaut trip to orbit by a private company parachuted to a safe conclusion in the Gulf of Mexico on Sunday.

It was the first water landing by NASA astronauts since 1975, when the agency’s crews were still flying to and from orbit in the Apollo modules used for the historic American moon missions.

The Crew Dragon capsule, suspended under four giant billowing orange-and-white parachutes, settled upright into the water at a gentle pace of 15 miles per hour at 2:48 p.m. Eastern time.

“On behalf of the SpaceX and NASA teams, welcome back to planet Earth,” Michael Heiman, the SpaceX engineer communicating with the astronauts, said after splashdown. “And thanks for flying SpaceX.”

More than an hour later, after Mr. Behnken and Mr. Hurley were helped out of the spacecraft, Mr. Hurley thanked the employees of NASA and SpaceX who helped make the mission a success.

“You should take a moment to just cherish this day, especially given all the things that have happened this year,” he said.

Although NASA was the customer this time, the mission could be a first step to more people going to space for a variety of new activities, like sightseeing, corporate research and satellite repair. A goal of the space agency is to turn over to private enterprise some things it used to do.

“We are entering a new era of human spaceflight, where NASA is no longer the purchaser, owner and operator of all the hardware,” Jim Bridenstine, the NASA administrator, said during a news conference after the splashdown. “We are going to be a customer, one customer of many customers in a very robust commercial marketplace for human spaceflight to low Earth orbit.”

NASA has hired two companies — SpaceX and Boeing — to provide transportation of astronauts to and from the International Space Station, and SpaceX was the first to be ready to take astronauts to orbit, launching Mr. Behnken and Mr. Hurley in May.

Gwynne Shotwell, the president and chief operating officer of SpaceX, said the mission was “incredibly smooth” and a step to more ambitious trips.

”This is really just the beginning,” she said. “We are starting the journey of bringing people regularly to and from low Earth orbit and onto the moon and then ultimately onto Mars.”

Earlier concerns about the Isaias storm system working its way up the Florida Atlantic coast prompted splashdown near Pensacola, the westernmost of seven possible landing sites, where calm weather cooperated to enable a safe return.

On Sunday morning, the astronauts woke up to familiar voices.

“I’m happy you went into space, but I’m even happier that you’re coming back home,” said Mr. Hurley’s son, Jack.

About an hour before splashdown, the spacecraft began a final series of maneuvers. As it passed over the Indian Ocean, just to the west of Australia, it jettisoned a bottom piece, known as the trunk, which was no longer needed. That exposed the capsule’s heat shield.

“Oh yeah, we felt it,” Mr. Hurley said after the maneuver was confirmed on the ground.

An 11-minute firing of the thrusters set the Crew Dragon on a trajectory to fall out of orbit at 17,500 miles per hour. The rush of air heated the bottom of the capsule to 3,500 degrees Fahrenheit and, as expected, cut off communications with the spacecraft for six minutes.

“I’m almost speechless as to how well things went today with the deorbit,” said Steve Stich, manager of the commercial crew program at NASA.

As SpaceX crews raced to attend to the capsule and its crew in the water, they also had to contend with a flotilla of small boats piloted by private onlookers seeking a closer view of the spacecraft. One of them flew a banner supporting President Trump.

“That was not what we were anticipating,” Mr. Bridenstine said. The Coast Guard cleared out the area for the splashdown.

“After they landed, the boats just came in, and we need to do a better job next time for sure,” he said.

SpaceX crews on the boats told them to move farther away, seeking to maintain the safety zone around the capsule because toxic propellant fumes from the spacecraft thrusters can endanger passengers on vessels nearby. Detection of residual fumes once the spacecraft was pulled from the sea delayed the opening of the hatch for the astronauts to exit.

Mr. Behnken addressed the SpaceX team just before he left the Crew Dragon: “Thank you for doing the most difficult parts and the most important parts of human spaceflight — getting us into orbit and bringing us home, safely.”

Once back on land, the astronauts were flown from Pensacola to Ellington Field, a military base in Houston.

By the time they walked off the Gulfstream plane, Mr. Behnken and Mr. Hurley looked as if they had already largely acclimated to gravity again, walking with only slight wobbling to seats on the tarmac, where Mr. Hurley and Mr. Behnken again thanked all of the people at SpaceX and NASA who had worked to make the mission a success.

Mr. Hurley said the journey was still “a lot to process,” then joked that he and Mr. Behnken had been in the capsule “making prank satellite phone calls to whoever we could get a hold of.”

He added that the phone bill should be sent to Mr. Musk, who had flown from California, where he had watched the splashdown from SpaceX headquarters, to Houston to welcome the astronauts back.

“I really came here because I just wanted to see Bob and Doug, to be totally frank,” Mr. Musk said during his brief remarks.

“I’m not very religious but I prayed for this one,” Mr. Musk said.

NASA has been busy in the past week. On Thursday, it launched Perseverance, its next robotic rover, on a six-and-half month journey to Mars. Mr. Bridenstine took the opportunity of Mr. Behnken’s and Mr. Hurley’s return on Sunday to promote the space agency’s next major push: to send astronauts back to the moon.

The House of Representatives, controlled by Democrats, has been reluctant to provide the money that NASA says it needs to meet a goal set by the Trump administration of a moon landing in 2024.

“What I’m asking for our members of Congress to do is look at what we’ve done with what we have,” Mr. Bridenstine said at Ellington after Mr. Behnken and Mr. Hurley had spoken. “And if you fund us at our budget request level, we will be on the moon.”

After the splashdown on Sunday, Mr. Trump tweeted, “Great to have NASA Astronauts return to Earth after very successful two month mission. Thank you to all!”

Mr. Behnken and Mr. Hurley ended up with a longer and busier stay at the space station than the two weeks originally planned. Because of repeated delays by SpaceX and Boeing, NASA ended up short-handed, with only one astronaut, Christopher J. Cassidy, aboard the space station when the Crew Dragon and its two passengers docked.

Once the mission is formally certified as a success, the next flight of the Crew Dragon will launch no earlier than late September. It will take three NASA astronauts — Michael S. Hopkins, Victor J. Glover and Shannon Walker — and one Japanese astronaut, Soichi Noguchi, to the space station.

The second operational flight, tentatively scheduled for February 2021, will use the same capsule that just returned with Mr. Behnken and Mr. Hurley. It will carry two NASA astronauts, Robert S. Kimbrough and K. Megan McArthur; Akihiko Hoshide of Japan; and Thomas Pesquet of the European Space Agency.