The Judicial Wars Started on Biden’s Watch. Can He End Them? 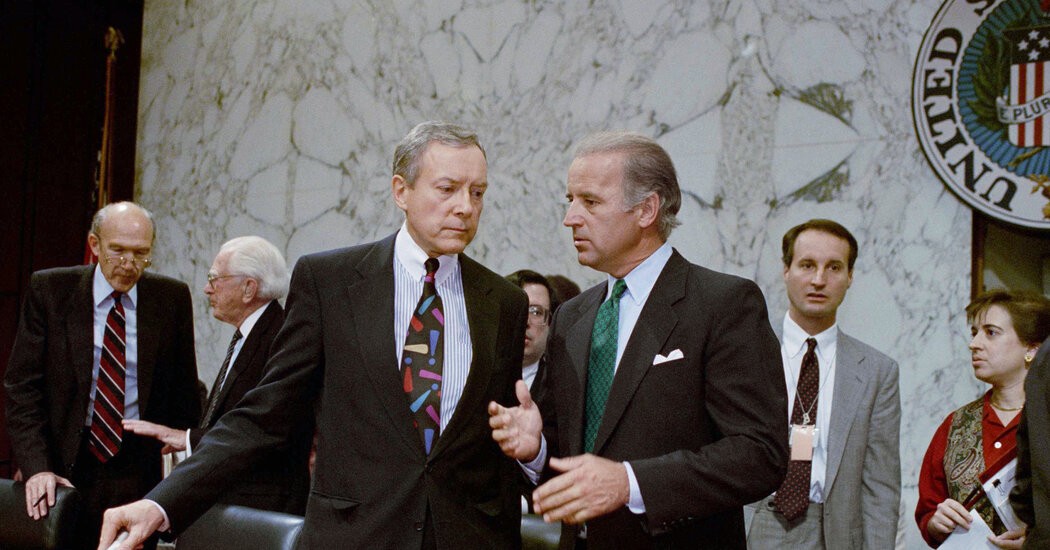 Joseph R. Biden Jr. was trying to demonstrate the lasting power of the federal judiciary. So he did the math.

Addressing a Michigan law school audience in April 1991, then-Senator Biden said that if trends in life expectancy held, a justice freshly confirmed around that time would “be making landmark decisions in the year 2020.”

“I’ll be dead and gone, in all probability,” Mr. Biden told the crowd.

He was half right.

Nearly three decades later, the man whom the Senate confirmed that year, Justice Clarence Thomas, is still rendering decisions — the eldest jurist, if President Trump has his way, of a soon-to-be 6-to-3 conservative majority.

But Mr. Biden is indeed alive, left to consider what the court’s emerging tilt would mean for the Democratic agenda if he wins the White House — and for his own attachment to the Capitol’s bygone harmony and mores.

After a half-century in public life, with a lead role in several indelible confirmation dramas through the years, Mr. Biden could, if elected, be saddled with a Supreme Court primed to counteract his policy aims on health care, abortion and other defining issues.

Many Democrats now believe that adding seats to the court is the urgent remedy, an extraordinary step that has not been seriously contemplated since the administration of Franklin D. Roosevelt. They argue that the court’s legitimacy has already eroded amid the Republican confirmation maneuvers of the last four years.

Yet for Mr. Biden, a proud man of the Senate, such an effort would amount to the sort of norm-razing exercise that might strike him as an escalation too many.

“My inclination is to think that he would just see that as making it more political instead of making it less political,” said Cynthia C. Hogan, a former Judiciary Committee aide who helped lead Mr. Biden’s search for a 2020 running mate. “I think he wants to restore the court to its earlier place of respect.”

In the immediate term, the court has unavoidably moved to the center of the campaign, with Mr. Trump’s expected announcement on Saturday that he is nominating Judge Amy Coney Barrett, a favorite of conservatives, to replace Justice Ruth Bader Ginsburg, the stalwart liberal who died last week.

If the judiciary is a subject with which Mr. Biden is intimately familiar — perhaps more so than any modern nominee — it is also one that he has largely avoided in the presidential race, preferring to focus on the calamitous federal response to the coronavirus pandemic and the perpetual volatility of Mr. Trump’s rule.

The broader irony is not lost on Mr. Biden’s allies: He is, at present, effectively powerless to stop the ideological drift of a court wrenched to the right by a president who ran casinos when Mr. Biden ran the Senate Judiciary Committee.

And even if Mr. Biden is elected, his institutionalist bearing might preclude his support for a possible workaround.

Interviews with more than a dozen former colleagues, aides and other contemporaries from his earlier court clashes present Mr. Biden as a conflicted combatant in the judicial trenches, negotiating the constant tug between precedent and pragmatism, convention and conviction.

During the Democratic primaries last year, as activists pressed him to embrace the court expansion proposals, Mr. Biden dismissed the idea out of hand, predicting that “we’ll live to rue that day.” But he has recently taken a more ambivalent stance.

A Coveted Seat on Judiciary

Even before he got to Washington as a 30-year-old senator, Mr. Biden had his eye on the Judiciary Committee.

And the road there ran through Senator James O. Eastland, a segregationist from Mississippi.

Mr. Eastland “was probably as far apart from me on civil rights as any man in the Senate,” Mr. Biden wrote in his 2007 memoir, “but he was also the chairman of the Judiciary Committee, a committee that handled all crime legislation, a committee on which I badly wanted to serve.”

They built a relationship, Mr. Biden said, and Mr. Eastland awarded him a spot at the end of his first term.

In the decades that followed, Mr. Biden’s time on the committee doubled as a kind of working history of the Supreme Court confirmation process’s lurch from collaborative to cantankerous — a trajectory Mr. Biden helped chart, sometimes assertively and sometimes reluctantly, and sometimes more by accident and error than considered strategy.

He was there in 1986 for the 98-0 confirmation of Justice Antonin Scalia, falling in line despite the nominee’s sharp conservative views, and for the non-confirmation of Judge Merrick B. Garland three decades later, as the vice president in an administration blocked from filling the vacancy left by Justice Scalia’s death.

Mr. Biden was there, as chairman by 1987, to thwart the nomination of the firebrand conservative Robert H. Bork, the first modern rejection of a nominee for principally ideological reasons.

And he was there to preside over the Thomas hearings, during which the committee’s treatment of Anita Hill, who accused the judge of sexual harassment, became an enduring mark on Mr. Biden’s Senate legacy.

Former aides and colleagues on the committee describe Mr. Biden as keenly attuned to Senate custom and determined to uphold a culture of collegiality — one that encouraged warm relations between Democrats like him and right-wing figures like Strom Thurmond of South Carolina, who led the panel for much of the 1980s.

Mr. Biden, the top Democrat on the committee at the time, participated in a few preliminary skirmishes in that period, including one that ended in the defeat of an Alabama district court nominee named Jeff Sessions. And Justice Scalia’s landslide confirmation is best viewed in the context of a simultaneous fight Democrats picked with another judge, William H. Rehnquist, whom President Ronald Reagan hoped to elevate to chief justice. Mr. Biden joined 32 senators in futile opposition.

But any tussle then seemed to register as a one-off, rarely tethered to any broader interparty antagonism.

“The confirmation battles of the time were nominee-specific,” said Neal S. Manne, who served in the 1980s as chief counsel to the Judiciary Committee when it was controlled by Republicans. “They weren’t really viewed as some sort of skirmish in a larger war for the political soul of the judiciary.”

They also were not necessarily required viewing.

For most of the decade, Mr. Manne said, “nobody came to the hearings; everybody got confirmed.”

“I don’t think he ever came close to articulating a ‘Biden test’ for what’s acceptable,” Mr. Tribe said. But, he added, Mr. Biden was concerned about nominees who would lead to the court’s “being way out of kilter and out of sync with the country as a whole.”

Robert Bork was one such nominee. Shortly before his nomination, Mr. Biden had suggested in a newspaper interview that he would most likely support such a choice because of Judge Bork’s formidable legal credentials. “I’m not Teddy Kennedy,” he told The Philadelphia Inquirer, suggesting that he was no fiery progressive.

Mr. Biden quickly shed that stance, arguing instead that the judge’s positions on civil rights, contraception and the right to privacy placed him far outside the mainstream.

In a speech on the Senate floor in July 1987, Mr. Biden insisted that ideology was fair game when the overall balance of the court was at stake. Part of the Senate’s role, he argued, was not merely reviewing a nominee’s background but also “preventing the president from undermining judicial independence and remaking the court in his own image.”

Aides and peers, including some of the six Republicans who joined him in opposing Judge Bork, credited Mr. Biden with synthesizing byzantine legal concepts into digestible arguments against the nominee in public hearings. Judge Bork’s defeat was also something of a personal redemption arc for Mr. Biden, whose first presidential run had collapsed weeks earlier amid allegations of plagiarism.

While some Republicans have not forgiven Mr. Biden, enshrining “Bork” as a verb for the unduly railroaded, any acrimony within the Senate itself was short-lived during his chairmanship.

The 2020 Democratic nominee who still often interrupts himself to raise a “point of personal privilege” was known especially for his attention to detail.

Thomas D. Rath, the former attorney general of New Hampshire who assisted in the confirmation process of Justice David H. Souter, recalled Mr. Biden’s going “out of his way to be gentlemanly” to the Souter team.

“He provided a staff room we could be in during breaks, made sure of things like the judge had water, all the nice little things you do,” Mr. Rath said. “He really had a very proper tone to it.”

Biden allies have suggested that his lowest moment on the committee — overseeing the Thomas hearings, in which Ms. Hill was subjected to invasive and demeaning questions from Republicans — owed largely to the same impulse: prizing Senate decorum in a moment when regular order seemed to have little meaning.

But if Mr. Biden hoped to earn a measure of appreciation from Republicans, he appeared to succeed.

“He just had a very, very difficult situation,” said former Senator John Danforth, a Missouri Republican who championed Justice Thomas’s nomination. “And he was trying to manage it to the best of his ability.”

Despite any lingering passions from the Bork and Thomas hearings, Mr. Biden’s time as chairman more often featured largely incident-free confirmations, under Republican and Democratic administrations.

‘Not the Way It Used to Be Done’

As in his Senate life, the Joe Biden of 2020 is no Democrat’s idea of a radical.

But that he would even publicly entertain the idea of adding justices as “legitimate” is a telling signal of how far his thinking has traveled — and of how far the Senate has, if even Mr. Biden seems to doubt that the present rancor can be transcended by sheer force of compromise.

Mr. Biden’s deference to cooler-heads-prevail thinking seemed to persist even as quarrels over the courts grew more vitriolic and ideological, with Democratic efforts to block the appellate court nominees of President George W. Bush and the Republican obstruction of President Barack Obama’s selections.

The battle over Judge Garland was a climactic encapsulation of the push and pull of judicial politics that has buffeted Mr. Biden throughout his career. In promoting the nomination as vice president, Mr. Biden hailed it as “the course of moderation” — the sensible option in a divided government. Stonewalling Republicans, Mr. Biden said, risked damaging “the bonds that held our diverse republic together for the last 229 years.”

Some Democrats have questioned whether the good will Mr. Biden sought from Republicans over the years did him much good in the long run, given his opponents’ slashing approach to the judiciary over the last decade.

“Unfortunately, I think he has been a little too slow,” said Jim Manley, a former aide to Mr. Kennedy and to Harry Reid, the former majority leader. “The idea that you can cut a deal with Mitch McConnell is just not accurate.”

If Mr. Biden has reached the same conclusion, he will be left to weigh whether there is any alternative to the current state of affairs besides total and ever-escalating warfare in the Senate and on the bench.

Former Senator Barbara Boxer, a California Democrat who served with Mr. Biden and described having institutionalist instincts in the Senate, said that she had come to believe that adding court seats should be explored.

“If you look over history, they’ve changed the number of justices many times,” she said. “It should be on the table.”

For Mr. Biden, pursuing that course would be a kind of admission that the glad-handing Senate experiences he holds dear (and cites often) are no longer particularly relevant.

In 2016, as he pleaded with Republicans to give Judge Garland a fair hearing, Mr. Biden told a law school audience in Washington that he had helped shepherd more Supreme Court confirmations than “anyone alive.”

“Ohhh,” Mr. Biden said, faux-exasperated, shaking his head and making the sign of the cross. “I can’t be that old.”