This Is an Election Story That Mentions Neither Biden Nor Trump 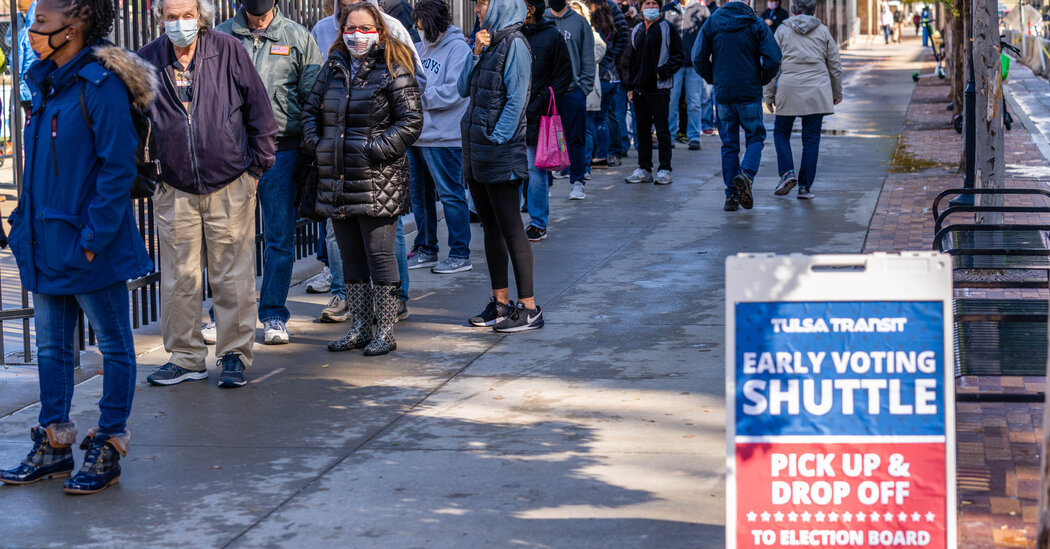 Clearly, the decision on whether the president should stay or go is Issue No. 1 on Election Day. But we’re watching so many other consequential elections and ballot issues further down the ballot.

What will a legislative campaign in Vermont tell us about changing attitudes toward gun control? Can a non-Latina be elected in Miami? Will the mayor of Portland hang on, after months of vilification from all sides?

We asked our national correspondents to share what they’ll be keeping an eye on this week.

After a summer of unrest over racial injustice, California voters will consider a measure aimed at dismantling systemic racism in two broad areas. Proposition 16 would reverse the state’s voter-approved ban on affirmative action in public university admissions and public contracting. Yet in a state that prides itself on its progressivism, polling has shown that it’s far from an easy win. Californians’ vote on Proposition 16 may hint at where debates over how to achieve racial equity are headed. — Jill Cowan

In Vermont, a grieving mother is challenging a state legislator in a campaign around gun regulations, an agenda Vermonters are, gradually, beginning to embrace. Alyssa Black was propelled into politics by the suicide of her youngest son, Andrew, in 2019. When a police officer informed her about Andrew’s actions on the day he died, she was stunned. “How could you leave for work in the morning, and your son drives out, buys a gun and shoots himself?” she said. “He bought a gun in 20 minutes.” Andrew’s obituary asked mourners to push a waiting period for firearms purchases, to “guard against impulsive acts of violence.” Her plea caught on in a state whose resistance to gun regulation is softening. The waiting period bill was passed by the Legislature, then vetoed by Gov. Phil Scott, a Republican. The experience prompted Ms. Black, a Democrat, to run against State Representative Bob Bancroft, a Republican and avid gun rights supporter. — Ellen Barry

A Black candidate wants to bridge the divide

Henderson County in Western North Carolina is nearly 93 percent white, and more than 61 percent of its residents voted for the current occupant of the White House in 2016. That makes it an unlikely place for a Black woman who considers herself politically progressive to find an electoral breakthrough. But Debbie Roundtree, 50, who works as a cleaner at a nursing facility, hopes to become the first Black person to win a seat on the county board of commissioners. She is attempting to persuade conservative white voters that despite their differences, they have similar interests as poor and working-class people. They need a quality education for their children, affordable housing and zoning rules that don’t displace them. “What affects you affects me,” Ms. Roundtree said, describing her pitch. In a country where racial divisions are deep, this contest may tell us something about just how much the year of racial justice protests has helped to overcome the stubborn divide. — John Eligon

A race for mayor becomes a proxy for national politics

Miami-Dade County, Fla., is home to 2.7 million people and encompasses about 2,000 square miles. The mayor manages a $9 billion budget. The position is the second most powerful executive in Florida, after the governor. And this year, the mayor’s race has become a proxy for national politics, though it is a nonpartisan office. In the running are two county commissioners from opposite ends of the political spectrum. Esteban Bovo, a Republican known as Steve, has been campaigning with his friend Senator Marco Rubio. Daniella Levine Cava, a Democrat, was endorsed by Hillary Clinton. If Ms. Levine Cava wins, she will become the first female mayor in Miami-Dade history, its first non-Hispanic mayor in 24 years and its first Democratic mayor since 2004, a victory that would reflect an ongoing shift in Miami politics, long controlled by Cuban-American Republicans. — Patricia Mazzei

A Democrat has a shot in an evangelical stronghold

Western Michigan is an influential region within evangelicalism, so it’s not surprising that the area now bound by Michigan’s Third Congressional District hasn’t been held by a Democrat in more than 40 years. But Representative Justin Amash’s recent break from the Republican Party may say something about his district’s current sensibilities: The race for the seat left open by his departure from Congress is a tossup. Hillary Scholten, a Democrat and an immigration lawyer, is appealing to local nostalgia for faith-rooted civility; one of her ads begins with the words “my faith is what calls me to serve.” Peter Meijer, a Republican, is an Iraq War veteran and scion of the grocery store chain bearing his name. If the seat goes to Ms. Scholten, it may indicate that certain theologically conservative churchgoers are willing to break with the Republican Party. That would be significant both for the party and for evangelicalism. — Ruth Graham

A proposal to amend the Oklahoma Constitution may show how far voters will go to shrink prison populations in a state with one of the highest incarceration rates. The amendment would prevent prosecutors from using past felony convictions to lengthen sentences for defendants convicted of another felony — assuming they have never been convicted of a violent felony. Inmates already serving longer sentences for nonviolent felonies could petition for a reduction. Backers, including the American Civil Liberties Union and the American Conservative Union, say the proposal would trim prison rolls by almost 9 percent over a decade, saving $142 million, while curbing the state’s reputation for unduly harsh punishments. Opponents, including many prosecutors, say it would benefit career criminals, and make it difficult to secure longer sentences for repeat domestic abusers whose crimes are not classified as violent under the amendment. — Richard A. Oppel Jr.

The magnolia may be Mississippi’s state tree and its state flower, but a vote to adopt a state flag featuring a magnolia represents a momentous shift. If approved, the new flag will replace one emblazoned with the Confederate battle emblem, the last in the nation. Lawmakers voted for the change as Confederate relics were toppled and excised across the South this year. Republican lawmakers who led the effort argued that Mississippi was a poor state that could not afford any barriers to outside investment, and the flag was a big one. But the debate on the floor of the State Legislature revealed something deeper, as lawmakers — white and Black, Republican and Democrat — wrestled over what the flag ought to represent. Jerry R. Turner, a Republican representative, talked about unity: “That’s what we’ve all prayed for.” — Rick Rojas

Watching for signs of a ‘blue wave’

In 2018, a Democratic victory in Wisconsin’s 10th State Senate District was hailed as a sign of a coming “blue wave.” Whether the incumbent prevails on Tuesday may indicate whether a second wave of Democratic victories is upon us. Patty Schachtner won the seat in a special election, in a district in northwestern Wisconsin that was seen as solidly conservative. A Republican had held the seat for 17 years. Ms. Schachtner’s win was seen as an erosion of the president’s support. This year, she has been outspent by her Republican opponent, State Representative Rob Stafsholt. A critical issue in their campaign: the coronavirus. Mr. Stafsholt has argued that Gov. Tony Evers, a Democrat, overused his powers to impose restrictions on Wisconsinites. Ms. Schachtner, an early promoter of masks and social distancing, is the medical examiner for her county. — Julie Bosman

Progressive prosecutors have taken office across America in recent years, promising to reduce prison populations and fight racial bias. Activists supporting their campaigns always saw Los Angeles County, with the country’s largest prosecutor’s office and jail system, as the ultimate prize. In the aftermath of the George Floyd killing in Minneapolis and nationwide protests, the Los Angeles race took on greater significance. Liberal leaders like Mayor Eric M. Garcetti pulled their endorsements of the incumbent, Jackie Lacey, who critics say has not done enough to reduce incarceration and prosecute police officers for shootings. Those endorsements, plus money from Hollywood and outside liberal groups, flowed toward the challenger, George Gascón, the former top prosecutor in San Francisco who has promised to take a tougher line on police shootings. The contest will be a bellwether for criminal justice reform and a test of whether Los Angeles’s liberal values extend to matters of crime and justice. — Tim Arango

A political reckoning follows a long season of protests

After a summer of protests, Portland voters will decide the fate of a politician at the center of it all. Mayor Ted Wheeler is probably best known nationally for his battles with the president, who has called him a “fool” for not ending the unrest. But the protesters also revile Mr. Wheeler for overseeing a Police Department that has repeatedly used aggressive tactics — including thick clouds of tear gas — when targeting people for arrest. Mr. Wheeler’s challenger, Sarah Iannarone, has aligned herself with the protests, declaring herself an “everyday antifascist.” It’s not clear where voters will land. One October poll had the candidates nearly tied, but 28 percent of voters remained undecided. — Mike Baker

A candidate with ties to Texas’ past and its future

The battle for Tom DeLay’s old seat in the Houston suburbs is about the past and future of Texas, and how one need not collide with the other. Mr. DeLay, the former House Republican majority leader known as the Hammer, represented a suburban Fort Bend County district controlled by Republicans for all but two of the past 41 years. A Democrat — Sri Preston Kulkarni, a former Foreign Service officer — has a shot at flipping it. Mr. Kulkarni is running to become the first Indian-American elected to Congress from Texas. He is at once multiethnic and old-school, much like modern Texas itself. He speaks six languages (English, Spanish, Chinese, Hindi, Hebrew and Russian) and claims a connection to Houston few candidates can beat: Sam Houston, the Texas statesman and the city’s namesake, is an ancestor on his mother’s side. — Manny Fernandez

In a D.A. race, the Ahmaud Arbery case looms large

The rise of the Black Lives Matter movement has increased scrutiny of local prosecutors, among them Jackie Johnson, the district attorney in Brunswick, Ga. Ms. Johnson, who is up for re-election, was the first prosecutor involved in the case of Ahmaud Arbery, a 25-year-old Black man who was running through a South Georgia neighborhood in February when he was pursued by three white men and killed. Mr. Arbery became a name on the lips of antiracism protesters nationwide. Ms. Johnson, a Republican, recused herself from the case early on, but her conduct is the subject of a criminal probe. Civil rights activists, angry that it took so long for murder charges to be brought against the suspects, have demanded that she step down. Her challenger, Keith Higgins, a former prosecutor, is running as an independent. Like Ms. Johnson, Mr. Higgins is white. His campaign website does not mention Mr. Arbery but does call for an end to “unethical and unfair practices of the district attorney’s office.” The language may be an effort to walk a fine line in a five-county area where white people are in the majority. — Richard Fausset