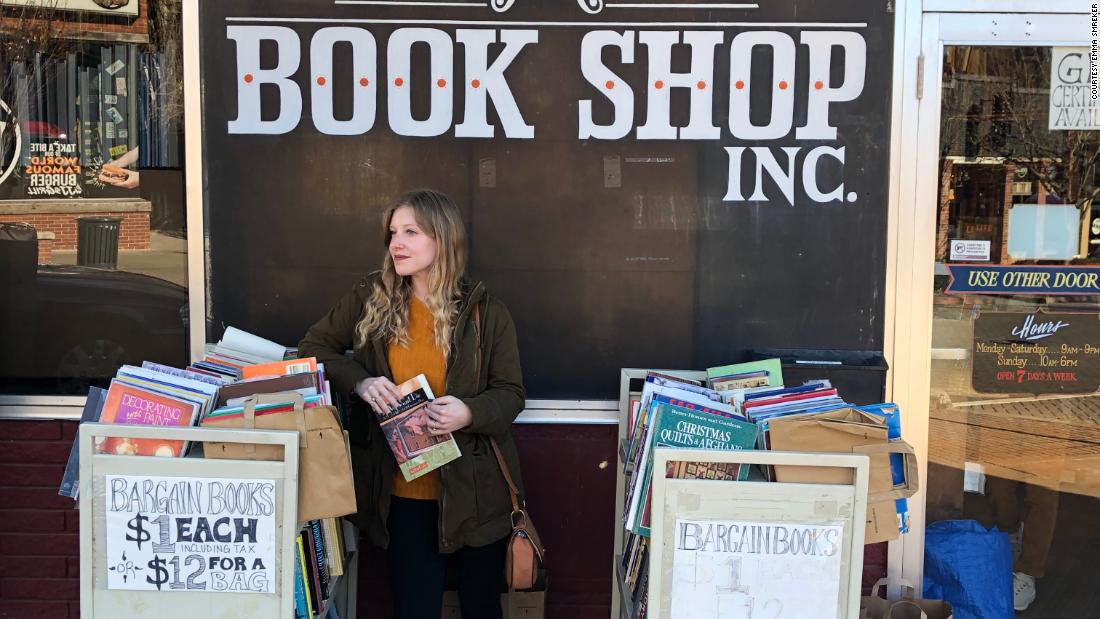 In her search, she hopes to unearth forgotten mementoes left between the pages of used paperbacks at her local book store or thrift shop. She often finds old plane tickets, business cards or receipts hastily used as bookmarks — small clues that tell a story about the book’s previous owner.

But occasionally she strikes gold and finds a poem written between pages, a long-lost photo from a previous reader or a love letter meant for a stranger.

“Through the reselling or donating or borrowing of books, you’re connected to another person in another way, especially if we leave notes in margins or a sticky note on a certain page or even a bookmark or a dog-eared page, which, god forbid,” said Smreker, who teaches high school French in Oklahoma City.

“It almost takes the solitary out of books because you’ve connected to this person who had the book before you, as well as their impressions and who they were when they had that book.”

Her hobby began with a receipt for a cafe in Montreal that she found tucked between the pages of a French-language book gifted by her husband.

“That receipt kind of immediately transported me there, and I started to think about who this person was who had this book before me, what were they doing, when did they go to this cafe, what their day was like. Then this idea just kind of started to form,” Smreker said. “Then before I knew it, I was on the floor in my living room going through on the books in my bookshelf looking to see if there were other little treasures of things that had been left behind.”

That initial idea led Smreker to create an Instagram account, @inusedbooks, which features photography of all the mementos she’s found since she started flipping through used books two years ago.

But it’s not just the treasure hunt and the beautiful back stories of these objects that she loves — it’s also tracking down the previous owners, who have often forgotten the books and the long-lost items.

“I think that’s part of the fun of it — is the surprise of people being like, ‘Oh my gosh I had no idea that I had left that in a book,'” she said. “It’s just so cool to think of all the things I have in my house all the books and secondhand items that have another story behind them and a history behind them.”

From between pages to in print

One of Smreker’s best finds yet was an unpublished poem, written out by hand in June of 1893.

Buried in a used book at a flea market, the poem was intended to be published in the Lancaster Gazette — an Ohio newspaper that’s still published about 1,000 miles about from Oklahoma City.

She was able to track down a family member of the poet, Ed Ruffner, of West Rushville, Ohio, who revealed that some of his previous poetry had been published in the paper. So, Smreker reached out to the paper, now called the Lancaster Eagle-Gazette.

“I said, ‘Hi, I have this letter that was intended for you. I have it, so I assume you did not get it. Would you do me the favor and help me finish this journey for the man who wrote this poem, and publish it?'” Smreker recalled.

But tracking down the owner of a keepsake with little information isn’t always easy. Last year, Smreker found a photo strip of two people with no identifiable information on the pictures.

“For about a year I was searching for the people in this photo,” said Smreker, who tried to track them down by posting their smiling faces on Instagram, Facebook and countless Reddit threads — even delving into golf Reddit posts because the man was wearing a shirt from a golf course in California — all to no avail.
But then local news station KOCO-5 picked up the story in July.

That night, Maria Meagher in San Antonio, Texas, was watching the local news, which she still happened to stream to her TV despite moving away from Oklahoma years ago. She was shocked to see her husband and daughter’s decade-old photo flash across the screen.

“It was so crazy, and when I think about it now, it’s still so crazy,” Meagher said. “When I saw it it was just a flicker of a ‘coming up in the next hour’ story. So they just flashed the photo strip on TV, and they are small photos but I was like, ‘That’s my daughter!'”

As she and her husband Tom, now 57, waited for the full segment to come on, he was sure his wife was mistaken. He didn’t remember ever taking a photo strip with his daughter Sophia, who is now 17.

But sure enough, there they were in black and white at ages 44 and 4, making funny faces for the camera. The photos were taken years ago during a trip to visit grandparents in California.

“From his perspective, it was so bizarre to see yourself on TV and see our daughter when she was so young. It almost brought a tear to his eye,” said Meagher, adding that they were unable to visit family this year due to coronavirus. “Things are so awful and uncertain right now for a lot of people — this is like the first thing that has made me smile in months.”

The Meagher family took new photos to send back to Smreker, and they plan to go for a coffee together the next time they are visiting Oklahoma City.

“I really don’t believe in coincidences, so maybe there’s a reason we’re supposed to meet. You just never know,” Meagher said. “Emma is a bright light — a lot of people would have just thrown that photo away.”

Community and connection through books

Smreker told CNN there is no way she could buy all the books she finds interesting objects in, but she does read a few of them and aims to support locally-owned bookstores. Her main haunt is Half Price Books on 63rd and May in Oklahoma City.

But she often finds bookmarks advertising bookstores outside Oklahoma, and she makes a mental note to visit them if she ever happens to be passing through another state. She also loves visiting independent book shops wherever she travels to other countries.

“I traveled to France with my students and of course I tried to stop in as many little bookstores in Paris as I possibly could just to see what I could find, and I loved finding almost exactly the same things as I would find in the United States, but in a different language,” she said.

“We all face that same situation where all of a sudden we need to get up and go do something but we’re in the middle of reading, and we can’t find our bookmark, so we just grab the first semi-flat thing we can find and stick it in the book. We all have those same moments across the world.”

Of course, trips to Montreal and Paris and faraway states are on hold for now, but readers can experience the world through Smreker’s photography or through the pages of a good, well-worn book. She hopes to pass on her loves for the trinkets, notes and clues we all leave behind that make her appreciate “the weird connection that we have through other humans through books.”

“Not just through what’s written on the pages but what we leave behind– it’s an impression of who we are and we pass it on to another person,” Smreker added. “We really are much more connected than I think people realize.”