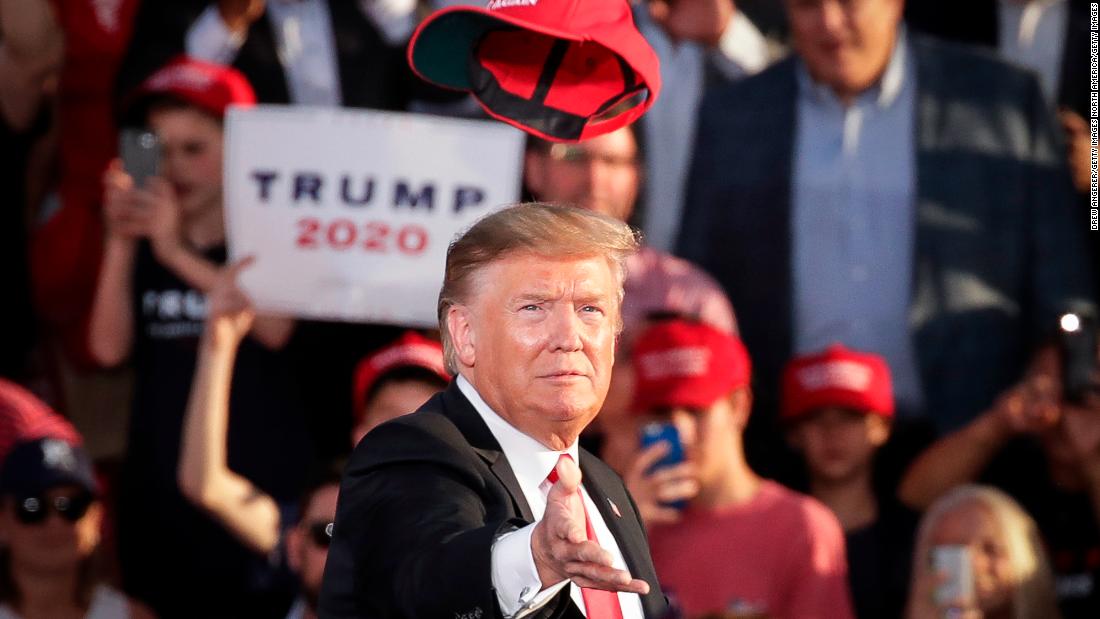 Perhaps it does to Trump.

In his rambling, disjointed campaign speeches, Trump spews out a stream of grievances, boasts and warnings. At this stage, you would expect him to try and persuade the undecided; to offer a plan — any plan — for his second term; to make an argument that might bring in anyone besides those who already give him their unquestioning loyalty.
The people attending Trump’s rallies — virtually the only large-scale gatherings in America in the time of spiking pandemic deaths, occurring despite pleas from public health officials — were not going to vote for Joe Biden. They don’t need to be convinced. Some say they’re willing to die for Trump.
So, what is he saying to try to get out the message beyond superspreader events dotted with MAGA hats?
The most perplexing theme is his multilevel-marketing pitch to racists of different stripes. There’s the light-touch racism, crafted for the “suburban housewife.” When Trump tweeted about “the suburban housewives of America” people mercilessly mocked his outdated term so, ever the feminist, now he addresses suburban “women.” Then there’s the parallel message to hard core racists, anti-Semites and conspiracy theorists.
Typical is this riff from Carson City, Nevada, on Sunday. “I think the women from the suburbs are looking for a couple of things,” Trump said. “One of them is safety. One of them is good, strong security. And one of them is they don’t want to have low-income housing built next to their house. And you know who makes up 30% of your suburbs? Minorities. African-Americans, Hispanic-Americans, Asian-Americans, minorities. Okay?”
Trump’s syntax and logic are never completely clear, but it’s all there. In another rally, this one in Muskegon, Michigan, he pushed his pitch to women warning darkly, absurdly, that Democrats would fill Michigan with refugees from Syria, Somalia, Yemen and “poorly vetted migrants from jihadist regions.”
If Trump wanted to reassure Michigan women about their safety, he might have said a few words in support of one Michigan woman whose safety is in peril, Gov. Gretchen Whitmer, the target of an alleged kidnapping plot disrupted only days ago by the FBI and state law enforcement.
Actually, Trump did have a few words about Whitmer, but they were mostly complaints that the governor abused her power with her pandemic restrictions. Let me repeat that: A group of men have been charged with plotting to kidnap and “overthrow” a sitting American governor. The President of the United States attacked not them, but their target. The crowds went wild with chants of “Lock her up!” Trump added, “Lock them all up!”
Trump’s relentless attacks on Whitmer, who blames the President for “inspiring and incentivizing and inciting this kind of domestic terrorism,” send a message to the hardest of his hard-core supporters, like the ones who grabbed their assault rifles and marched on Michigan’s state Capitol in the spring after Trump tweeted “LIBERATE MICHIGAN!”
Attacking Whitmer fits with Trump’s refusal — since walked back — to condemn White supremacy during his first debate with Joe Biden and telling the far-right Proud Boys to “stand back and stand by.” It also matches his energizing message to the outlandish conspiracy theorists of QAnon during last week’s town hall.
That’s also where his attacks on Dr. Fauci come in. On a campaign call, Trump referred to Fauci and other health officials as “idiots,” called him a “disaster,” and continued slamming a man most Americans trust — certainly trust far more than they do the President.

These are the kinds of actions that would seem to further erode his support among most Americans. Why is he doing it?

There are three possible explanations for a campaign strategy that defies common sense:

First, Trump apparently thinks many Americans are frightened racists, scared of anyone who is different in any way, so he may believe that his appeals to xenophobia could win him a majority of the vote.

The second option is that he knows he won’t win, but he is using the remaining days of the campaign to stoke the fires of hatred, anger and mistrust, hoping that their smoldering passions will lead his backers to reject the outcome of the election if Biden beats him. This aligns with another theme of the campaign, his continuous, unfounded claims that there is widespread voting fraud.

The final option is that Trump has no strategy. That what we’re seeing is the continuation, perhaps the final chapter, of a presidency guided not by logic and thoughtful planning, but instead by Trump’s gut, by his instinct, by his inability to curb the expression of his own emotions, now mostly anger, fear and frustration.

It’s hard to decide which is worst. A President who thinks he governs a country of racists; one who is priming his backers to reject a democratic election or one who is utterly irrational? What a choice.