To Battle a Militarized Foe, Portland Protesters Use Umbrellas, Pool Noodles and Fire 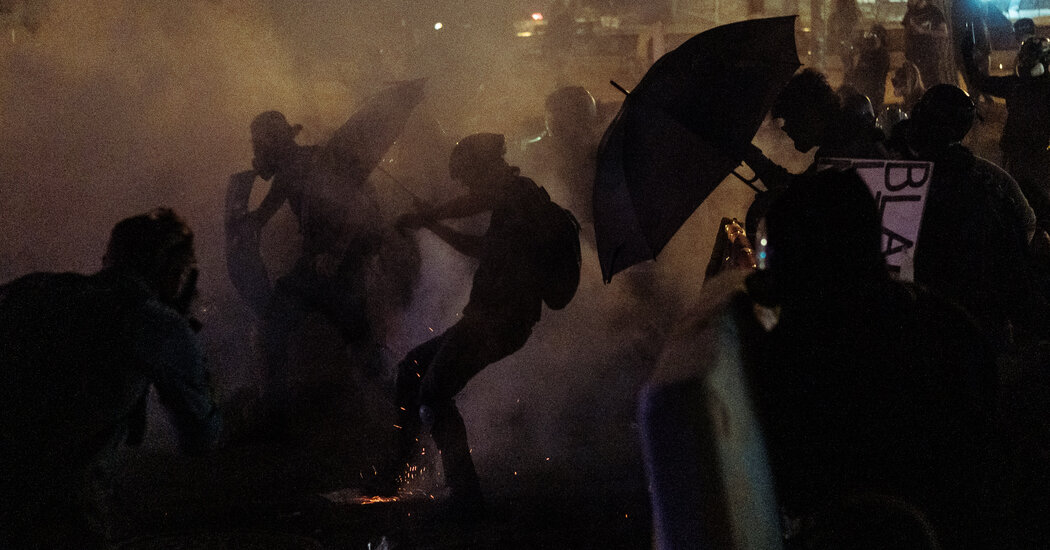 PORTLAND, Ore. — Shields were made of pool noodles, umbrellas and sleds. The body armor was pieced together with bicycle helmets and football pads. The weapons included water bottles and cigarette lighters.

Facing federal forces who came to Portland to subdue them, many of the city’s protesters have taken to the streets this week with items scrounged from home. Then they have assembled at the federal courthouse each night with sometimes starkly different visions of how to put their tools to use.

In 55 consecutive nights of protest in Portland, no two have been alike. The protests began on May 29, following the killing of George Floyd in police custody in Minneapolis. They have continued ever since, night after fiery night, and they show no signs of letting up.

With no clear leaders or blueprints, the demonstrators have largely embraced a strategy of spontaneous consensus, which follows the whims of the crowd and, sometimes, the resolutions of their internal disagreements — such as whether fire is an appropriate addition to their protest.

“It’s really organic and non-centralized,” said Luke Meyer, who walked through the streets overnight with a plywood shield. “You almost vote with your actions.”

With the movement largely without leaders or a consistent strategy, city officials have been unable to find a way to bring the demonstrations to an end. Now those protesters are giving grief to federal agents who were assigned to maintain calm in the city but have instead watched the number of protesters outside the federal courthouse swell into the thousands.

“Whose streets?” they shout, in one of their signature chants. “Our streets. Whose lives matter? Black lives matter.”

The protests have drawn diverse crowds, from teenagers up to grandmothers, from longtime activists to those joining the fray for the first time.

In the early morning hours on Wednesday, protesters used a range of tactics. While some spent their time chanting, dancing or locking arms, others slowly chipped away at the temporary wooden facade of the courthouse building, eventually pulling away a whole panel to expose an entryway. Some used lasers or bright lights to shine at holes from which federal officers sometimes fire projectiles into the crowd. Others dragged in barricades to cover the building’s entrances.

At one point in the protests that raged from late Tuesday night into Wednesday, federal agents rushed out of the courthouse and shoved a group of mothers wearing matching yellow shirts as tear gas billowed around them. In another moment, the agents knocked one protester down onto a pole. After clearing a park, the agents rummaged through a makeshift kitchen that has been used to feed the protesters, knocking food and supplies to the ground.

Facing volleys of tear gas that left many coughing, the protesters retreated up Main Street. But they soon regrouped and returned as the authorities backed off. In an echo of the “umbrella revolution” in Hong Kong, protesters with shields and umbrellas took the front of the line to protect themselves and others from the weaponry of federal forces in tactical gear.

The authorities have accused protesters of at times using dangerous methods, including launching projectiles from sling shots. In one of dozens of arrests during the demonstrations, a protester was charged recently with hitting an officer with a hammer.

In court documents, the federal government has said protesters have committed “vandalism, destruction of property, looting, arson and assault.” A Molotov cocktail was thrown on May 28, according to court papers, and security cameras on federal buildings have been vandalized. One protester was accused of pushing a glass door on July 2, causing the glass to break and injure a deputy marshal.

The federal efforts to confront the demonstrators in recent days were often preceded by attempts by some protesters to light fires on the facade of the federal courthouse, which has been boarded up with wood that has been painted and targeted by protesters.

On Wednesday morning, someone started trying to light a portion of the facade but was blocked by another person. Later, a debate developed in the crowd over whether to allow the fire, with one protester arguing that being peaceful was the better route.

Megan Smith is among those who opposed the use of fire, saying she douses any flames she encounters.

“I would prefer fires to be controlled,” Ms. Smith said. “I get it that it’s how you get your anger out, but it makes it dangerous for everybody else.”

In part, she said, starting a fire raises the risks for everyone because it is clear that it will prompt federal officers to come out to confront the crowds. And on Wednesday, it did just that.