To Trump, ‘the Polls That Matter’ Point to Victory. The Rest Are ‘Fake.’ 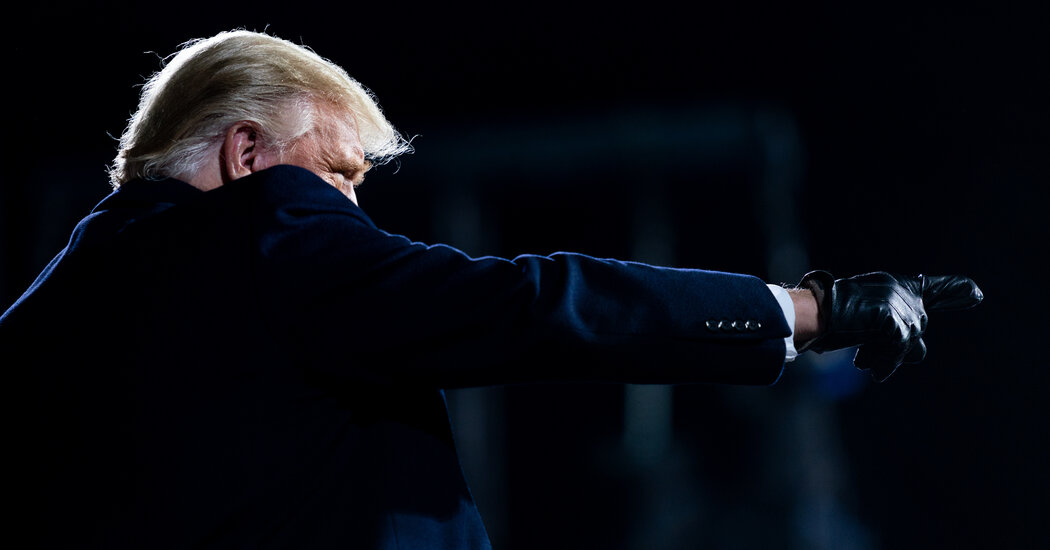 When President Trump talks about polling, his focus is very much on survey-takers that he thinks are good for him. Polls that show him trailing Joseph R. Biden Jr. — virtually all national polls — are simply “fake news.”

The president’s blinkered view has created something of an alternate universe, one not governed by polling averages or independent analysis but by declarative statements that, at times, feel as if they are coming out of nowhere.

This month, Mr. Trump proclaimed on Twitter that he was “winning BIG in all of the polls that matter.”

Such polls seem to boil down to Rasmussen Reports, which consistently — and in isolation — has a rosier picture for the president nationally than other surveys do, and the Trafalgar Group, which has had better numbers for Mr. Trump in Midwestern states.

His choose-your-own-adventure approach to polling that has shown little understanding of data science, and his pronouncements have come as his advisers are trying to take in serious polling and data analysis to make sense of what the electorate voting in 2020 will look like.

It has been a hallmark of Mr. Trump’s public commentary since the first time he ran for president that he treats polling as rigged against him if it isn’t favorable for him. Despite his campaign spending $10 million over the past two years on some of the most sophisticated data available, the president prefers to use what he sees on the news. And he treats voter support as a mystical, rather than a mathematical, proposition.

Some of Mr. Trump’s advisers believe there is a wellspring of “shy” or “hidden” Trump voters — predominantly whites without college educations in rural areas — who are either not candid with pollsters about their choice for president, or aren’t responsive to pollsters at all.

“I speak to all my state directors,” said Mr. Kushner, who has positioned himself as the leader of the Trump campaign, though he is not in fact the campaign manager, adding, “I do believe that polling with phones to people is an obsolete method, especially in the era of cancel culture. You’ve got a lot of snake oil salesmen who have kind of been in the business for a long time and they do this.”

He concluded, “They were all completely wrong last time, and they didn’t make any modifications going forward.”

That is not quite true: Though many state polls proved very wrong in 2016, the national polls that projected Hillary Clinton narrowly winning the most votes were close to the mark, and many polling outfits did make modifications, weighting, for instance, for educational backgrounds.

Complaining that polls are “skewed” against Republicans has been a vocal pastime of Republican candidates for several election cycles, reaching a high pitch in 2012, when Mitt Romney was the party’s presidential nominee.

Officials continue to claim in 2020 that the public polling is wrong because they’re “skewed” against Mr. Trump, overweighting Democrats in the samples.

Robert Blizzard, a Republican pollster with Public Opinion Strategies, said that incumbents usually ended up “on Election Day with a ballot share that is within a point or two of their October job approval score.” In Mr. Trump’s case, his average approval score is 45 percent, according to Real Clear Politics.

The Trump campaign has spent years and presumably millions of dollars engaging white voters without college educations who are eligible to vote but did not vote in 2016. There are almost 1.5 million such potential voters in Michigan and more than two million in Pennsylvania.

But at the end of the day, much of the “hidden” vote stays hidden — that’s why voter turnout isn’t ever 100 percent, Mr. Blizzard said.

Beyond the polling, the fundamentals shaping the electorate, like the economy and the record-breaking coronavirus surge, are “increasingly ominous” for Mr. Trump, said Liam Donovan, a veteran Republican strategist.

“Ironically, the polls may be the best thing the Trump campaign has going for it at this point,” he said.

While Mr. Trump makes polling a punchline, both his campaign and the Republican National Committee rely on data to decide where to allocate resources. One of the murkiest issues is modeling for which voters will turn out during a pandemic and an economic downturn.

And the Trump campaign has kept polling data one of its deepest secrets since leaked internal polling early in the campaign prompted a shake-up of the polling team.

The campaign has been using various analyses, not all of which overlap. Traditional polling has been handled by the Republican pollsters Tony Fabrizio and John McLaughlin, who were hired when Brad Parscale, the previous campaign manager, was running the effort; Mr. Parscale’s deputy campaign manager, the former White House political director Bill Stepien, took over in July.

There has also been analysis by the former Cambridge Analytica official Matt Oczkowski, who is referred to as “Oz.” Mr. Kushner has held up Mr. Oczkowski’s analyses, which cut against public polling and suggest votes will break Mr. Trump’s way in the final days of the campaign, people who have heard the comments said.

The amount of polling from Mr. Fabrizio and Mr. McLaughlin has dwindled in recent weeks. Instead, Mr. Stepien quietly hired another pollster, Bill Skelly, who helped create the Republican National Committee’s complex modeling for voter turnout scenarios and who is conducting data analysis for the camp, and Brock McCleary, who has worked with clients who include congressional Republicans. Mr. McCleary’s estimates of Mr. Trump’s poll standing are less “negative” than some other Trump pollsters, according to people close to the campaign.

Mr. Parscale, who had worked fairly closely with the R.N.C., had envisioned continuous robust television ad spending through the year. Since he stepped aside, the Trump campaign, which has far less money than advisers had once anticipated, has slashed its television spending. Exactly what data has driven the allocation of the campaign’s remaining ad spending is unclear.

Two Republicans said the campaign had not reviewed the R.N.C.’s turnout models from the time Mr. Parscale was demoted until a meeting a few weeks ago convened by Mr. Kushner to get the campaign and the R.N.C. to work together more effectively. Tim Murtaugh, a Trump campaign spokesman, denied that was the case, and a spokesman for the R.N.C. said the organizations were working effectively together.

The R.N.C. turnout models vary by state, but in some scenarios, it shows Mr. Trump performing worse than he does in the campaign’s own polls, two people briefed on the numbers said.

Nonetheless, that meeting led to a final, $26 million television allocation led by the R.N.C.

Whether the weeks without a unified front between the campaign and the party committee will have been a significant factor in the outcome of the race remains to be seen. And whether the “hidden” voters the Trump team has sought matters more than a few percentage points is also unclear.