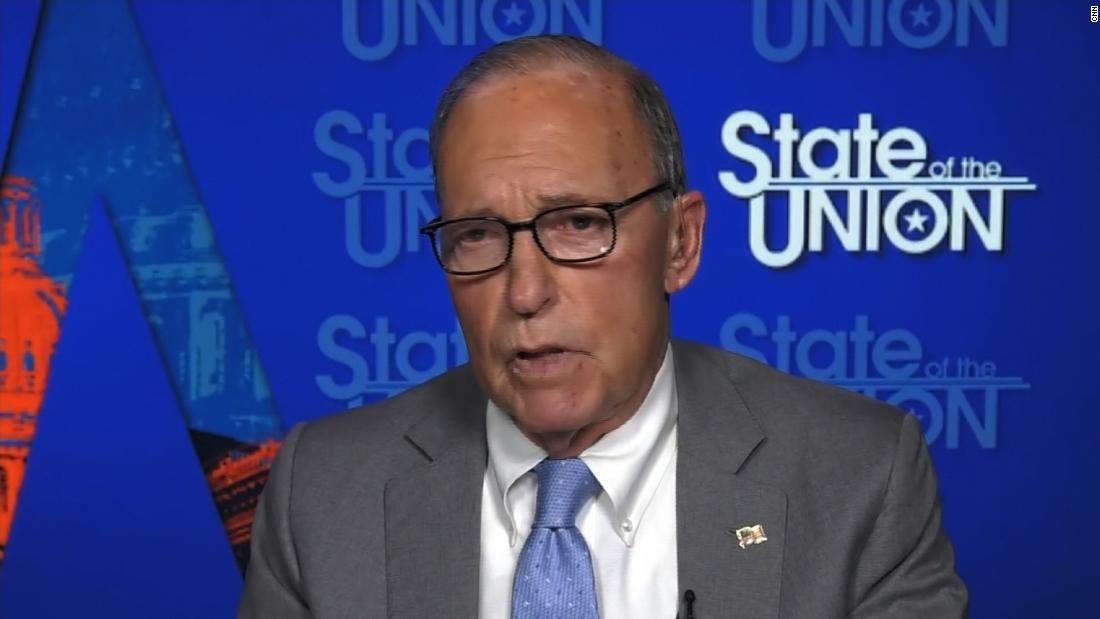 Larry Kudlow told CNN’s Dana Bash on “State of the Union” in an at times confusing series of answers that the administration expects states to be able to cover the portion of enhanced unemployment benefits that Trump ordered through executive action on Saturday. If states don’t agree to participate and meet the financial requirement of paying 25% of the as much as $400 amount, people receiving benefits in those states will not receive any of the extra assistance.

Bash questioned Kudlow’s statement, saying, “But the executive action says $400 and that the state would pay 25% of this. You’re talking about some other money that I don’t know about.”

“Well, we will stand ready to re-purpose if states put in a little bit more is all it amounts to,” Kudlow said. “Right now, that number’s going to run around $700. I think they’ll get to $800. Some states can get above $800 with our federal help.”

In continuing to press Kudlow on the figures, Bash called for a “reality check.”

“We need a bit of a reality check here,” Bash said. “You do agree that the only way any of this could possibly happen is if the states actually ask for it and create a whole new system. And is that what your expectation is?”

Kudlow didn’t say how whether he agreed that states had the capacity to create a new system for the benefits or if they would ask for the money, instead saying, “That’s like topping it off. State benefits, we’re talking about averages here across the country.”

“Our estimates from the Treasury Department in terms of the CARES Act one was that states have not spent all the money that was allocated to them,” Kudlow said, referring to the sweeping stimulus package Congress passed in March.

Kudlow said the White House expects states to use what he described as that “considerable overflow” of previous stimulus funding to pay for the unemployment benefit. Trump’s action requires states to provide $100 of the as much as $400 enhanced benefit, with the federal government providing the remaining $300. Some experts have said states will not be able to use those funds for this unemployment aid since it is a new program not authorized by Congress.

“We will be re-purposing funds from other areas” to pay for the federal portion of the benefit, Kudlow said, adding: “Based on our estimates, the states will be able to provide the extra $100.”

Kudlow also defended the President’s action establishing what the White House had described as an eviction moratorium — though the action doesn’t actually provide one.

“We’re setting up a process, a mechanism,” Kudlow said of the action. He said the executive measure establishes a process that will allow the Department of Health and Human Services to flag areas of concerning Covid-19 spread, and within those areas it could apply more broadly.

“If HHS declares emergencies, then evictions will be stopped,” Kudlow said, noting that people living in federally financed single family homes will continue to be protected.

This story has been updated with additional developments.