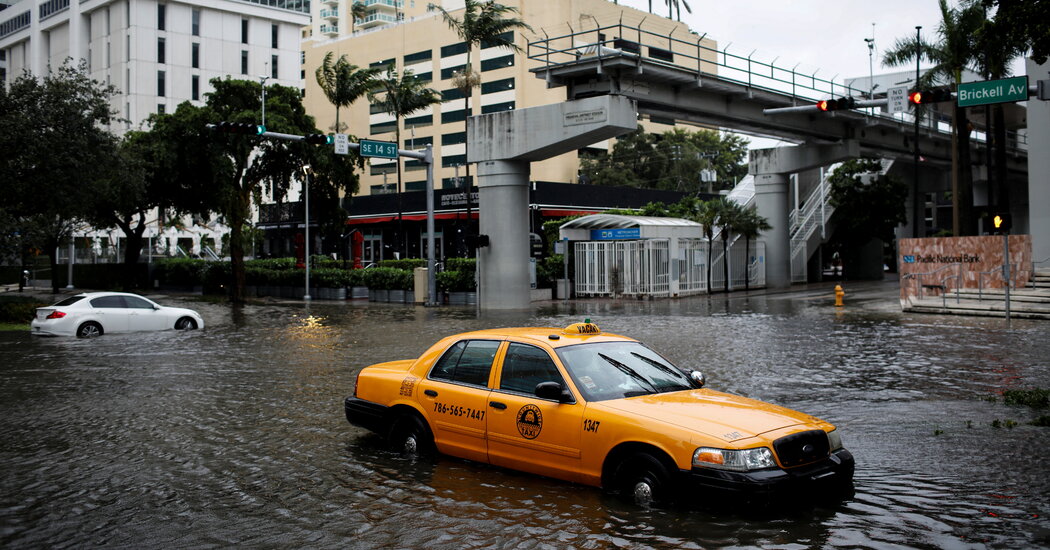 MIAMI — South Florida awoke to streets turned into shallow rivers on Monday after Tropical Storm Eta soaked the region overnight. It dumped rain inland, caused storm surge along the coast and left hundreds of thousands of people without electricity.

More than 13 inches of rain fell in some areas, according to the National Weather Service, flooding front yards and back patios, threatening mobile home communities and creating dangerous driving conditions. By 11 a.m. on Monday, three flash-flood emergency alert warnings had screeched over cellular phones, each time extending the danger period.

Water was knee-deep in parts of Broward County. In Plantation, Lemay Acosta, 38, surveyed the flood in his neighborhood on foot, wearing water boots, while tugging Layla, his 2-year-old daughter, in a small boat.

“I’ve been at this house actually for six years, and we’ve never really seen it this high,” he said — not even during Hurricane Irma in 2017, when the worst thing that happened was that the power went out. “There’s a fire hydrant that was only exposed about four inches. That’s a foot and a half” of water, he estimated.

Mr. Acosta said he had watched nervously as the water rose to just outside the door of his house. He pulled his wife’s GMC truck higher up the driveway to keep it safe.

“Two, three inches more and somebody driving by fast, the wake would go in,” he said.

Emergency workers had to rescue a driver who drifted into a canal in the city of Lauderhill. The motorist was in critical condition, the fire department said. Canals had merged with roads, according to the department.

The driver who was hospitalized had made a wrong turn in a parking lot and inadvertently drove into the canal, said Capt. Jerry Gonzalez, a spokesman for the Lauderhill Fire Rescue Department.

“Yesterday afternoon to early this morning was when we had torrential rain nonstop for hours and hours and hours,” he said. “We are getting tons of calls for motorists stranded in their cars. We’re urging people: Stay home.”

Eta, a rare storm to make landfall in November, the tail end of the six-month hurricane season, came ashore at 11 p.m. in the middle Florida Keys and moved into the southeastern Gulf of Mexico. But the “dirty” side of the storm — where the strongest winds and thunderstorms are — was northeast of its center and lashed the upper Keys and Miami-Dade and Broward Counties. The lower Keys appeared largely spared.

Miami-Dade and Broward Counties had already seen so much rain before the late-season storm that the widespread flooding could take a while to fully recede. The rainfall in the region has been 15 to 20 inches higher than normal for this time of year, said Paxton Fell, a meteorologist with the National Weather Service in Miami.

Residents in waders ventured outside on foot to document the damage with their cellphone cameras. Cars whose drivers attempted to make it through the floods stalled on the road. Intersections appeared impassable either overnight or in the morning in many neighborhoods, including Fort Lauderdale and Brickell, near downtown Miami.

Mayor Francis Suarez of Miami said the surge along Biscayne Bay was a little more than two feet high. The city’s big pump in Brickell, which saw some eight inches of rainfall, was undergoing emergency repairs and was not working on Monday, he said.

In Lauderhill, Mayor Ken Thurston said pumps were working overtime to drain the water, but with so much rain, it would probably take days for the flooding to subside.

“Unfortunately, there are some toilets that are not flushing because of the high water,” he said. “People can’t get to work because they can’t back their cars out. We’re seeing this flooding in every one of the 31 cities in the county.”

“It kept raining and slowly rose and rose and rose,” she said. “It’s our entire street. There’s no dry spots at all.”

By the time she woke on Monday morning, she had about two-and-a-half feet in the backyard and two feet in the front. She waded through the water to check on her car, which she had parked at higher ground around the corner, safe. She found flooded cars throughout her block and floating debris from trees and trash cans.

“It was up to my knees,” she said. “There’s random pieces of wood everywhere.”

The power was out Monday for more than 41,000 Florida Power & Light customers, mostly in Miami-Dade, Broward and Palm Beach Counties. The company said nearly 300,000 people lost power on Sunday as the storm approached and most had already had it restored, but crews cannot work in areas where the water has not subsided, said Bryan Garner, the utility’s communications director.

Some 12,000 workers from 22 states were deployed throughout the state. But with winds spread across 300 miles, the affected area was vast, he said.

“Tropical storms can in many ways be more damaging than some hurricanes,” Mr. Garner said. “This is a widespread, sloppy storm.”

Crews have been out working to restore power in areas where the sustained winds have died down somewhat and in-between bands of rain, said Bill Orlove, also a company spokesman.

“You can’t fly a bucket truck in winds that exceed 35 miles per hour,” Mr. Orlove said. “Miami is seeing gusts above 40 to 50, but as long as the sustained winds are below that, our crews are able to restore service.”

Eta, the 28th named storm of the 2020 season and the first to make landfall in Florida this year, is forecast to meander over the warm waters of the Gulf for the next day or two, according to the National Hurricane Center. The storm, surrounded by dry air that weakens tropical systems, is no longer expected to strengthen into a hurricane but rather intensify slightly and then gradually weaken.

It could still turn to the northeast, possibly returning to Florida’s Gulf Coast, but the storm deteriorated after passing over South Florida. All tropical storm watches and warnings for Southwest Florida were lifted.

“If the models are correct and the storm doesn’t move to the north, then it’s just going to get sheared apart, just sitting there in the central Gulf of Mexico,” said Stacy Stewart, a senior hurricane specialist with the hurricane center. “The storm is degenerating before our eyes right now.”

There is broad scientific consensus that climate change is one of the central forces behind increasingly extreme weather, including hurricanes, producing worsening floods and more powerful storms.

The unrelenting 2020 season is not over: At 1:05 a.m. on Monday, the hurricane center noted on Twitter that two other areas — one in the open Atlantic Ocean, one in the Caribbean basin — have medium chances of developing into tropical cyclones this week.