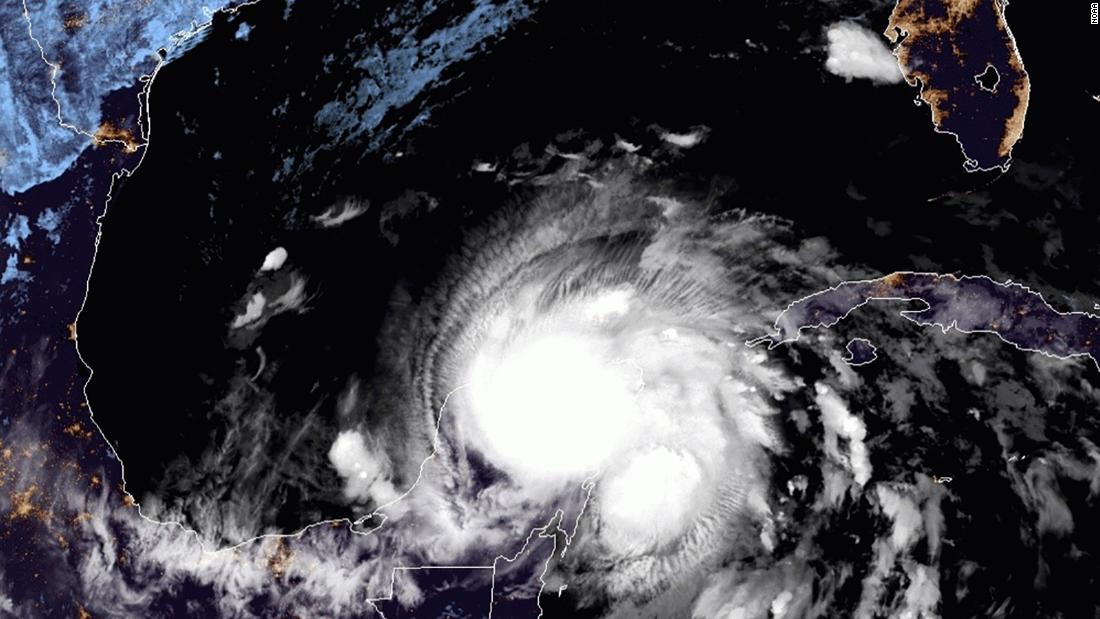 Zeta made landfall in the Yucatán Peninsula north of Tulum, Mexico, as a Category 1 hurricane Monday night, bringing heavy rains and possible storm surge to a region struck by Delta just three weeks ago, according to the National Hurricane Center. It weakened slightly to a tropical storm but is expected to strengthen back into a hurricane over the Gulf of Mexico before reaching the US coast Wednesday.

Hurricane warnings for the storm extend from Morgan City, Louisiana, to the Mississippi/Alabama border, including Lake Pontchartrain, Lake Maurepas, and metropolitan New Orleans. A storm surge warning and tropical storm warning have also been issued for Cozumel and Punta Allen to Progreso, Mexico as well as the border of Mississippi and Alabama and the border to Okaloosa and Walton County Line, Florida.

Preparations for the storm are underway in New Orleans, Louisiana, where voluntary evacuations have been issued for areas outside their levee system, including Irish Bayou, Venetian Isles, and Lake Catherine, starting Tuesday evening, a release from the City of New Orleans said.

The New Orleans metro area is bracing for tropical storm force winds, heavy rain and coastal flooding of four to six feet as a result of Hurricane Zeta, according to the city’s release.

Residents are being encouraged to gather emergency supplies, including food, water, and medications, for at least three days, and the city of New Orleans plans to provide sandbags to residents on Tuesday, the release said.

On Monday, Louisiana Gov. John Bel Edwards issued an emergency declaration ahead of Zeta’s arrival. More than 1,150 Louisiana National Guardsmen have been activated and have a variety of high-water vehicles, boats and helicopters pre-positioned for search and rescue efforts, the Governor said.

“We must roll up our sleeves, like we always do, and prepare for a potential impact to Louisiana,” said Edwards.

It has been a very active hurricane season, and it could be record setting for Louisiana. Zeta is forecast to reach the state at or near hurricane strength Wednesday — and if it does, it will set the record for most named storms in the state in one season.

“The good thing and a bad thing at the same time is, we’ve had a lot of practice this year,” Edwards said.

Zeta would be the fifth, following Cristobal, Laura, Marco and Delta. Zeta would also bring Louisiana to tie with Florida in 2005 with the most landfalls in any state in one season.
“This storm is expected to make landfall somewhere on the Gulf Coast by midweek, meaning we have a few days to prepare. As we’ve seen this hurricane season, a tropical threat during the ongoing COVID-19 emergency is challenging, but something we can handle,” Edwards said in a tweet.

And the area is still reeling from back to back storms.

Hurricane Laura struck as the strongest storm in Louisiana since 1856 in late August. In Louisiana and Texas, the storm destroyed homes and structures in its path and killed at least 25 people. More than 8,000 Hurricane Laura evacuees were in shelters six weeks later when Delta struck, Edwards said.
Hurricane Delta left a trail of “hazards like flooded roads, downed power lines and displaced wildlife” across the state, Edwards tweeted at the time. The storm killed at least four people, spawned more than 10 tornado reports from the Gulf Coast to the Carolinas, and covered part of Louisiana in more than 17 inches of rain.

“Even if it wasn’t quite as powerful as Hurricane Laura, it was much bigger,” Edwards said of Delta. “Obviously, this was a very serious, very large and powerful storm that produced significant amounts of damage.”

CNN’s Haley Brink and Taylor Ward contributed to this report.