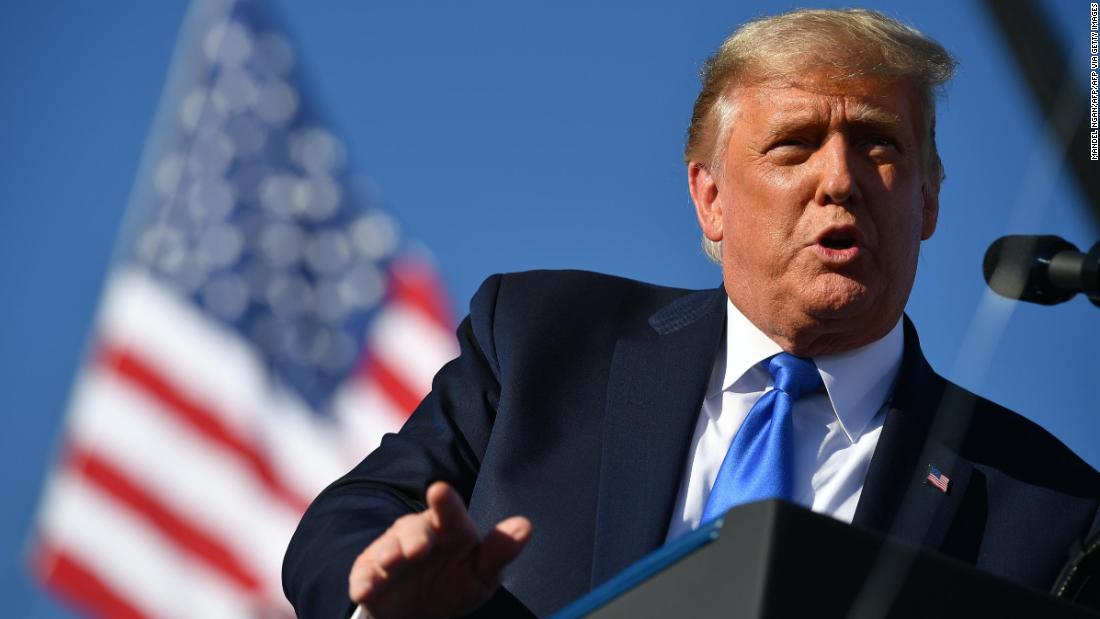 After camera crews set up at the White House on Monday, Trump sat down with host Lesley Stahl for about 45 minutes on Tuesday before he abruptly ended the interview and told the network he believed they had enough material to use, according to two sources.

CBS News did not immediately respond to a CNN request for comment. When reached for comment, the White House did not dispute CNN’s reporting.

The President later accused Stahl of not wearing a mask and tweeted out a brief clip of her without one while at the White House.

A person familiar with the situation told CNN that the image from the tweet shows Stahl with her producers immediately after Trump ended the interview. Stahl had not yet gone back to get her personal belongings to put her mask back on. She had a mask on from the time she entered the White House and just before the interview began.

With about two weeks until the election, Trump has spent this week lobbing scatter-shot attacks and growing upset at depictions portraying his campaign as doomed. His truncated taping on “60 Minutes” seemed an extension of what has been Trump’s visible irritation as he enters the campaign’s final days.

Former Vice President Joe Biden and California Sen. Kamala Harris were also interviewed by “60 Minutes” and all four are scheduled to appear in the same program on Sunday. While Biden and Harris taped their interviews separately, Trump and Pence were scheduled to appear on camera together, like they did four years ago, for a walk and talk session. But Trump did not return for the appearance with Pence, sources said.

The interview is slated to air this Sunday.

Facing a major national polling deficit against Biden, Trump has grown combative this week, lobbing accusations and insults as time runs out to win back voters.

On Monday he called Dr. Anthony Fauci a “disaster” and accused the news media of being “criminals” for not covering unfounded accusations against Biden.

On Tuesday morning, Trump demanded his attorney general work “fast” to launch an investigation based on the unfounded accusations before the election. And he accused the panel organizing Thursday’s debate of bias after it announced the candidates’ microphones would be muted for sections of the event.

While Trump remains optimistic about his chances of victory, his road to reelection is narrow as polling in states he won in 2016 show Biden ahead. Trump has appeared furious over stories suggesting his campaign is fated for defeat and has questioned why Republicans are appearing to distance themselves.

Standing on a tarmac in Arizona on Monday, Trump acknowledged he was upset.

In a 2018 interview, Stahl challenged Trump on his views of climate change and Russian election interference. While it became contentious at times, Trump completed the sit-down.

Stahl previously said that during an off-camera conversation with Trump in 2016, when he was running for President, he admitted his attacks on the press were meant to discredit negative stories that emerged about him.

“He said, ‘You know why I do it? I do it to discredit you all and demean you all so when you write negative stories about me, no one will believe you.’ He said that,” Stahl said.

This story has been updated to reflect additional reporting.