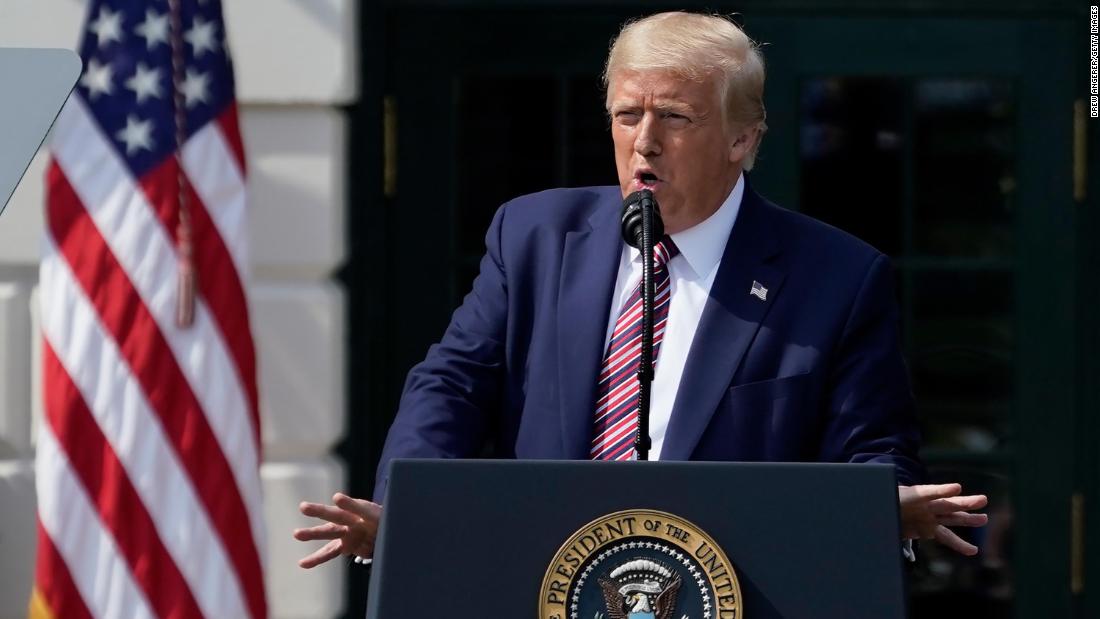 Trump spent little time trying to lead America out of its coronavirus crisis this week, which was bookended by an erratic Rose Garden press conference Tuesday and a sharply worded campaign speech by Vice President Mike Pence in Wisconsin Friday afternoon. Clearly losing the battle on messaging, the President and his team sought to reframe the 2020 election as a choice between their agenda of “freedom and opportunity” and what Pence claimed is Biden’s vision of an America under “growing control of the state” — a future he said would lead to “socialism and decline.”

Their aim — in keeping with the President’s relentless push to reopen the US economy regardless of the human cost — is to get Americans to focus on anything other than the raging virus while distracting from the administration’s flawed effort to control it earlier this year, a diversionary tactic that has not worked so far.

After aggressive race-baiting earlier this summer, the Trump team is pivoting with greater focus to the longtime GOP tactic of trying to paint their Democratic opponent as weak and ill-equipped to protect and defend America.

Trying to signal a shakeup to address falling poll numbers, Trump demoted his campaign manager Brad Parscale this week and elevated a more seasoned Republican operative, Bill Stepien, to the top role. In his first public comments as campaign manager Thursday, Stepien argued that the Trump campaign has “better voter information, a better ground game, better fundraising” and a “better candidate,” and promised the team would use the time between now and November to “expose Joe Biden as a hapless tool of the extreme left.”

Pence on the stump

Distilling the Trump campaign’s argument in Ripon, Wisconsin, on Friday, Pence described Biden as something akin to a zombie candidate who had been co-opted by Vermont Sen. Bernie Sanders and the radical left, and falsely claimed that Biden is now aligned with far-left activists who want to defund the police.

The vice president pointed to a document released by the task force convened by Biden and Sanders to unify the Democratic Party after Biden clinched the Democratic nomination: “I thought Joe Biden won the Democratic primaries, but looking at their unity agenda, it looks like Bernie won,” Pence said in Wisconsin, a key swing state that Trump won by less than a percentage point in 2016.

While scarcely mentioning the human toll of the coronavirus, Pence charged that Biden and Sanders have embraced an agenda based on government control that would be defined by “an avalanche of regulation,” “open borders” and hostility toward police.

Though Biden has rejected calls to “defund the police” following the death of George Floyd, who was killed at the hands of a Minneapolis police officer, Pence twisted the former vice president’s words in a recent interview with activist Ady Barkan (where Biden said he “absolutely” agreed that some police funding should be redirected).

With that comment, Pence said Biden had “capitulated to the radical left-wing mob.”

“Joe Biden would weaken the Thin Blue Line that separates order from chaos,” Pence said, noting that the Trump administration would never defund the police. “We will defend the police every day. … The hard truth is: you won’t be safe in Joe Biden’s America.”

Trump echoed those comments in a tweet Friday night: “Corrupt Joe Biden wants to defund our police. He may use different words, but when you look at his pact with Crazy Bernie, and other things, that’s what he wants to do. It would destroy America!”

But the President has tried unsuccessfully to make that argument for several months now — and it doesn’t seem to be sticking so far — as he has attempted to stoke racial division in America to ignite supporters wary of the cultural shift inspired by Floyd’s death.
In his latest attempt to fire up White suburban voters, Trump used an event on the South Lawn of the White House to condemn an Obama-era federal rule that is intended to reduce segregation in housing, claiming it would “obliterate” America’s suburbs.

Employing tired racial tropes that were used in the previous century — and that seem wildly out of step with the views of most Americans today — Trump claimed that under the rule, homes will “go down in value and crime rates will rapidly rise… Suburbia will be no longer as we know it.”

But there is scant evidence that Trump’s tactics of fear and racial division are working. This week brought another poll showing Biden leading Trump by double digits, as his coronavirus performance still appears to be a major driver in his approval ratings.

More alarming for Trump’s campaign, as CNN’s Harry Enten noted this week, Americans are continuing to lose confidence in Trump’s handling of the coronavirus, and that erosion is beginning to show up among Whites without a college degree and rural voters, two groups that supported Trump by about a 30-point margin as the core of his base in 2016.

In an average of recent ABC News/Ipsos and Quinnipiac polls, Trump’s approval rating on coronavirus among Whites without a college degree was about 50% and the numbers were similar among rural voters, Enten noted.

And as much as Trump and Pence would like to shift the conversation away from the coronavirus, it is still top of mind for Americans as the US shattered yet another record Thursday with more than 77,000 new Covid-19 cases.

Two-thirds of Americans (66%) said in a new ABC News-Washington Post poll that they are at least somewhat worried they or someone in their family might catch the coronavirus, and 60% said they disapprove of the President’s handling of the outbreak.

The trust gap for the President when it comes to Covid-19 is glaring: a stunning 64% said they trust “not much” or nothing at all of what Trump says about the pandemic.

And yet, Trump doesn’t seem to be doing anything to show he can lead on the virus. The President spent the week talking about dishwashers and posing with cans of Goya products on the Resolute Desk. Some of his aides would like him to return to the briefing room podium for regular coronavirus briefings, but the last time he did that, he told Americans that ingesting disinfectant might help treat the disease.

The administration’s moves to suppress public information about the spread of Covid-19 certainly will not help rebuild voter confidence. The Trump administration’s decision directing hospitals to bypass the US Centers for Disease Control and Prevention and send their data directly to the Department of Health and Human Services met a furious backlash from public health experts this week.

In a statement Friday, CDC Director Dr. Robert Redfield insisted the reporting change was meant to curtail the “reporting burden” by reducing “confusion and duplication of reporting.”

“No one is taking access or data away from CDC,” Redfield said.

But the administration’s move was widely perceived as another attack on transparency in public health data. Meanwhile, the White House is blocking Redfield and other officials from the agency from testifying before a House committee hearing next week on reopening schools.
Trump continues pushing states to reopen their economies and resume in-person school this fall, despite concerns from public health experts about how that could accelerate the spread of the virus to vulnerable populations, including nearly a quarter of the nation’s teachers.
Trump’s willful disconnect from the coronavirus reality was also underscored late this week by an unpublished report prepared for the White House coronavirus task force, which was obtained by the non-profit Center for Public Integrity, that recommended rolling back reopenings in 18 states that are part of the coronavirus “red zone.”

Devin O’Malley, spokesman for Pence and the task force, said the report showed “encouraging signs” amid the pandemic, because a few weeks ago Pence reported that “16 states met the criteria for rising cases and rising positivity rate.” In the unpublished report, he noted that only 10 states fit that criteria. “This is just one data point of many encouraging signs that we are seeing across the country as we continue to respond to the coronavirus pandemic,” O’Malley said in a statement to CNN.

But as many times as Trump and Pence try to claim that America is moving on from the virus and that everything is fine, the data continues to tell another story.

“People say is this a second wave? No. We’re still in the first one,” Dr. Francis Collins, director of the National Institutes of Health, told CNN’s Wolf Blitzer on “The Situation Room” Friday evening.

“It never quite went away,” after the major outbreaks in March and April, Collins said, “and now it’s coming back in a very steep incline, which is, of course, a source of great concern for anybody, especially in those hard-hit areas.”