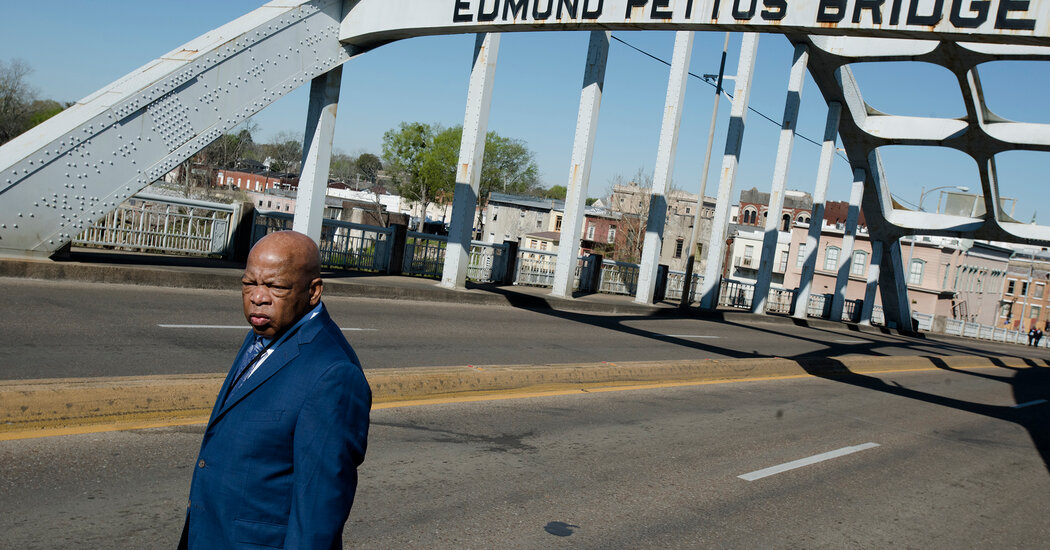 President Trump played down the accomplishments of Representative John Lewis, the recently deceased civil rights icon, and criticized him for not attending the Trump inauguration in an interview conducted while Mr. Lewis was lying in state at the Capitol.

The comments from Mr. Trump, which aired on “Axios on HBO” Monday night, were unsurprising, given his penchant for grievance. But they were nonetheless stunning for the degree to which Mr. Trump refused to view Mr. Lewis’s life and legacy in terms beyond how it related to Mr. Trump himself.

When asked to reflect on Mr. Lewis’s contributions to the civil rights movement, Mr. Trump instead talked up his own record.

“Again, nobody has done more for Black Americans than I have,” he said. “He should have come. I think he made a big mistake.”

Mr. Trump declined to say whether he found Mr. Lewis’s life story “impressive.” He seemed indifferent to renaming the Edmund Pettus Bridge in Selma, Ala., after the congressman. The bridge, named after a former Confederate general, Grand Dragon in the Ku Klux Klan and senator, was the site of a turning point in the civil rights movement that became known as Bloody Sunday.

On that day, March 7, 1965, Mr. Lewis suffered a cracked skull during a march across the bridge when a state trooper clubbed him and beat him to the ground. The moment was a defining one in his life and in the civil rights movement. Mr. Trump, in the Axios interview, suggested there “were many others also” whose work should be praised.

The president and the congressman were at odds since before Mr. Trump’s inauguration, when Mr. Lewis questioned the legitimacy of Mr. Trump’s election and said he would not be in attendance when the president-elect traveled to the Capitol to be sworn in.

“I think the Russians participated in helping this man get elected,” Mr. Lewis said in a television interview days before Mr. Trump took office. “And they helped destroy the candidacy of Hillary Clinton. I don’t plan to attend the inauguration. It will be the first one that I miss since I’ve been in the Congress. You cannot be at home with something that you feel that is wrong, is not right.”

In the wide-ranging interview with Axios, Mr. Trump repeatedly insisted he deserved praise for the country’s ability to detect the coronavirus through testing and dismissed criticism that he and his administration should have done more to contain it. Remarking on the more than 150,000 deaths the virus has caused, he said: “It is what it is.”

“They are dying. That’s true,” Mr. Trump said in the interview, which was recorded on July 28.

“It is what it is. But that doesn’t mean we aren’t doing everything we can. It’s under control as much as you can control it.”

Mr. Trump repeatedly played down the virus throughout the spring, and did so again in the interview, insisting that cases are falling in places where they aren’t.

Mr. Trump was also asked about his recent well wishes for Ghislaine Maxwell, the former girlfriend of Jeffrey Epstein, who has been charged by federal officials with trafficking underage girls. Mr. Trump said he hoped nothing “bad” happened to her in prison.

“Her boyfriend died in jail and people are still trying to figure out how did it happen, was it suicide, was he killed?” Mr. Trump said. “I do wish her well. I’m not looking for anything bad for her.”

Attorney General William P. Barr has said that Mr. Epstein definitely killed himself as he was being held in a Manhattan jail last year. But conspiracy theorists have continued to question the death.