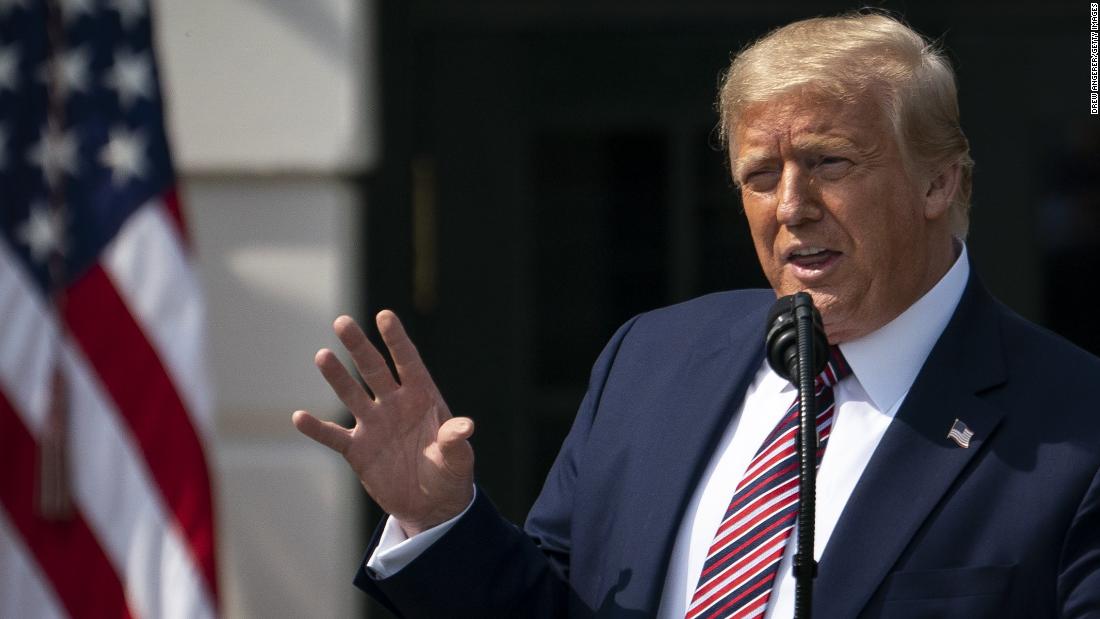 Until then, America must endure crammed ICUs in virus-ravaged states, thousands more deaths and the prospect of cities slumping back into economically crippling lockdowns that crush hopes of a return to work and school with normal life as only a memory.

Ignoring how the coronavirus is raging out of control and that other nations have done far better in suppressing its spread, Trump called Dr. Anthony Fauci’s truth telling about the situation “alarmist.” The White House is meanwhile pushing back against Senate Republicans’ requests for more money for a belated testing and tracing operation deemed critical to finally crushing the virus and helping America emerge from its nightmare.
Trump’s willingness to accept an elevated level of victims while leaving the impression there’s nothing to be done but wait until the storm passes shows an extraordinarily disengaged and callous interpretation of the duties of the presidency. It doesn’t even seem to make much sense from an objective view of his political self-interest. A Washington Post/ABC News poll published Sunday, for instance, showed that Democratic presumptive nominee Joe Biden had a 20-point lead over Trump in public confidence in handling the pandemic.
View Trump and Biden head-to-head polling

Despite finding every 2020 campaign aspiration blocked — a return to rallies, a rebound in the polls, an economic bounce back and attention for his assaults on Biden — Trump is unwilling or unable to admit the depth of the emergency.

While there is a strong desire in the country to return to regular life — a feeling on which Trump is playing with his demand to reopen all schools — the President is ignoring public concern over whether such a step is safe. Similarly, his semantic quibbles about the mortality rate from the disease show that he cares about the situation far less than his top priority — reelection.

In fact, as he escalates his campaign of fear and race baiting, he is making clear that he is betting he can win in November while ignoring a disease killing hundreds of Americans every day. To that end, the President is spending more energy on concocting excuses, blaming others and peddling falsehoods about the crisis than he is directing his government to help alleviate the disaster.

His approach suggests that he does not believe he needs to triumph over a threat to the American people but merely needs to convince sufficient numbers of them that he’s won a great victory. It is a gamble that contradicts multiple polls showing plummeting support for his handling of the situation. And it is putting his fellow Republicans — still wary of alienating Trump’s base — in a tough spot.

“I have confidence in this administration,” Ohio Republican Gov. Mike DeWine said on NBC’s “Meet the Press” — dodging carefully when asked whether he had confidence in Trump. Other Republican governors, watching the virus take hold of their states, have broken with Trump on issues like mask wearing.

The President spent the weekend spewing misinformation and lies about the pandemic and cranking up an ever more extreme reelection campaign in a series of telephone town halls, including a warning that he might not accept the verdict of voters in November. He also doubled down on his strategy of fanning fear of other races among White voters: “They’re going to destroy our suburbs,” Trump said, apparently referring to Democratic bureaucrats likely to uphold rules meant to promote the desegregation of housing and more diverse suburban areas.

The latest data shows coronavirus cases rising in 32 states, steady in 14 and decreasing in only four, in the fifth month of a crisis lengthened by sporadic state efforts to fight the virus and a lack of federal leadership.

New coronavirus cases have averaged more than 60,000 a day over the last week. Deaths are averaging 700 a day and rising. While physicians are getting better at treating the disease, these figures guarantee many more deaths. Overflowing emergency rooms in states like Texas, Arizona and Florida mean some people may not get the care they need and will die as a result.

Yet Trump’s focus was not on the reality of the disaster on Sunday. He told Fox’s Chris Wallace that “if we tested half as much, those numbers would be down.” In a counter-logical argument, Trump attributed Europe’s suppression of the virus following a terrible time early this year to a lack of testing.

Experts say that the unrestrained spread of virus throughout the United States belies such claims by the President.

Trump then rebuked Wallace for using Johns Hopkins University data contradicting his claims the US leads the world with regard to Covid-19 mortality rates and went on to attack two of the country’s top health officials.

Asked to respond to Centers for Disease Control and Prevention Director Dr. Robert Redfield, who has warned of a grim winter ahead, Trump said: “I don’t know and I don’t think he knows.”

He described Fauci, who was proven right when he said premature state openings could cause rising infections, as “a little bit of an alarmist.” And the President accused public health experts of believing the theory of which he has been the most prominent exponent — that hot weather would kill off the virus.

“So they got that one wrong,” he told Wallace.

Why the mortality rate is a strange argument

The true death rate from the disease has been very difficult to pin down. But it is likely to end up at 1% or less.

Trump’s supporters use such data to argue that it was unwise to shut down the economy for a disease that is not lethal for almost everyone who catches it. Apart from ignoring the human dimension of the disease, this view discounts the highly infectious nature of the virus, which could in theory infect hundreds of millions of Americans and lead to a staggering death toll if left unchecked. Moreover, the impact on hospital infrastructure — and on the health workers who care for the sick — could be horrific were it not for lockdowns and social distancing.

There is also increasing evidence of long-term health effects including breathing difficulties and organ damage among people who have suffered from the disease — even among younger patients, who Trump correctly says are less likely to die of Covid-19.

The reality of the pandemic crisis as the week begins confounds Trump’s commentary over the weekend.

There are currently no ICU beds available in 49 Florida hospitals. The Sunshine state recorded more than 12,000 new cases of the virus on Sunday — the fourth time it has reached that benchmark. Louisiana Democratic Gov. John Bel Edwards said Sunday the virus “is more rampant” in the state than it has ever been. Arizona recorded its highest daily death toll — 147 — in the pandemic on Saturday.

The Democratic Mayor of Los Angeles, Eric Garcetti, said on CNN’s “State of the Union” that he was on the “brink” of declaring a new city-wide lockdown. Senate Minority Leader Chuck Schumer said Sunday, responding to a question from CNN, that Trump wanted to “sweep the facts” of the virus under the rug.

“Whenever the President has tried to avoid the problem, like ‘this will go away, this won’t affect many people,’ it’s gotten worse,” the New York Democrat said.

But Trump, the President who praised China for its handling of the virus before turning on Beijing and who said it would never be an issue in the United States, is unrepentant.

“I’ve been right probably more than anybody else,” he told Fox.